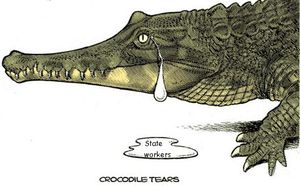 If the editors are being Minnesota Nice.  Those who are following in other traditions in a state that brought both the administration of Jesse Ventura and the 1934 truckers’ strikes aren’t being quite so reticent. And  they’re evoking a bit of a menagerie.

Some stick with near relatives. In Next election, bring in the monkeys﻿, Henderson Independent editor James Brenno writes:

. . .Both sides are to blame for this mess, but what confounds me the most about the shutdown, regardless if it goes on for just a few days or weeks, is that for some reason Republican legislators were able to live with seeing thousands of people lose their jobs and millions lost in private sector revenue than support a tax increase on the very rich – couples making over $1 million.

At times, I think some our elected politicians believe the state government is its own special entity removed from society. But believe it or not, there are real people with real families who pay real taxes that work for the government.  . . .

The Winona Daily News call on a more cold blooded image. In Our view: GOP remains the party of no, Darrell Ehrlick writes on behalf of the editorial board:

When GOP legislators cry loudly about not being called back into session, pinning the blame on Gov. Mark Dayton, those tears are crocodile.

On Wednesday, Dayton proposed several options to close the $1.2 billion revenue gap, turn on the lights of state government, and give lawmakers a week to pass legislation reflecting the compromise.

The Republican leadership turned down a combination of five different solutions and offered absolutely nothing in return.

The leadership offered something – the same old, tired excuse, which fits nicely on campaign literature but leaves lights dark in government. . . .

Read the entire, pithy opinion at the WDN.

Way over in the opposite corner of the state, the Fergus Falls Daily Journal reported last week that state senator Gretchen Hoffman [is] frustrated by lack of “lights-on” bill. Bluestem finds the notion of a frustrated Gretchen Hoffman sitting around with the lights off to be a very unsettling image indeed. That being the case, the motive behind the editorial board saying that the GOP [will] have to allow tax increase to end shutdown is in no way mysterious. We can’t blame them.

Down in Marshall, the editors of the Independent also agree that a tax increase has value in Vulnerable residents need more protection than wealthy:

This might not go over well in a Republican-heavy area, but if Gov. Mark Dayton is right and his budget plan would do as much as possible to protect state services and prevent cuts to social programs, we’re behind it – not because of his party affiliation, but because it’s what’s best for the people who rely on those services. If it turns out that the newly-formed independent commission comes up with a better plan to protect those people, we’re all for that, too. . . .

Up in St. Cloud, the editors of the Times say in  Politicians’ top priority isn’t people:

. . . At this point, if you’re a legislator and you are not talking about constructive solutions and compromise, you also are not caring that:

» About 20,000 state workers marked their first week of unemployment because of you.

» The state’s coffers, which you ultimately control, are going south faster than Matt Capps’ pitching.

» Your political games are putting increasing stress on everything from inspections of health care facilities to helping vulnerable residents.

Collectively, even though it’s only been one week, Tom Stinson — himself laid off as the state’s economist — says the shutdown is dragging down all of Minnesota’s economy. . . .

Another Central Minnesota voice, Tim Douglass at the Pope County Tribune, writes about the narrow margins in the last election in There really was no mandate for either party:

Don Heinzman at the ECM chain implores in Dear Legislators, Come on. Compromise:

Forget giving in to your base and do what’s best for Minnesotans.

You were not elected to represent just your base of political support.

As a legislator you represent all the people in your district, not just Republicans and not just Democrats.Your vote also represents all of the people of Minnesota.

Allowing a shutdown to continue just to appease your base in the next election is disgraceful.

It’s becoming apparent that Minnesotans are frustrated because the ones they elected to make a difference are betraying that confidence.

The governor is agreeing to make significant budget cuts in health and human services for the most vulnerable Minnesotans who depend on government programs. He wants to tax the wealthiest Minnesotans who can afford them to prevent further cuts in the Human Services budget. Most Minnesotans agree with that.

And so it goes. There are some voices that agree with Senate Majority Leader Brodkorb, The Not-Brodkorb Senator Koch and House Speaker Zellers about no compromise, but it’s more like the voices of slough-pumps’ lonely calling in the swamps. A bittern’s narrative.

More often, Minnesota’s small town editors are sounding like Joel Alstad, the sports editor of the Cottonwood County Citizen, who writes in the Lost art of compromise:

.  . .In fact, both sides are to blame. Both sides have opted to stand up for their own political ideology rather than doing what is best for the state of Minnesota. One would think, by witnessing today’s political environment, that the word “compromise” was synonymous with “weakness.” In fact, compromise is a necessity in effective government.

Former Rhode Island Governor Donald Carcieri, a Republican, had a history of conflict with the Democratically-controled Assembly of his state yet won election in 2002 and again in 2006, largely due to his ability to compromise with the Assembly. He is noted for saying, “Healthy disagreement, debate, leading to compromise, has always been the American way.”

And noted businessman Andrew Carnegie once said, “I shall argue that strong men, conversely, know when to compromise and that all principles can be compromised to serve a greater principle.”

To serve a greater principle - the state of Minnesota and its people - should stand ahead of any rigid political principle on either side of the aisle.

A recent Star Tribune poll showed that 67% of Minnesotans agreed with Gov. Dayton’s plan to both cut spending and increase revenue. On Thursday, just prior to the state shutdown, Gov. Dayton lowered his demands of increasing the income tax on the top 2% of wage earners in Minnesota to just those making $1 million or more annually.

Gov. Dayton’s proposed budget and that of the Republican-controlled legislature are still over $3 billion apart, but at least Gov. Dayton has shown a willingness to meet the Legislature in the middle. The Legislature has shown no such movement as of yet.

For compromise to work, there must be give and take on both sides. Clearly a “my way or the highway” approach has not worked, nor will it. And the side that refuses to meet somewhere in the middle will likely suffer at the ballot box in the next election.

Let’s hope, for the good of the state, that the middle ground is found sooner, rather than later. For the state to move forward, compromise and common sense need to come before political principles.

Note: For a daily link farm of news and views from Greater Minnesota, check out Al Juhnke’s Middle Minnesota.