The Greater Frogtown Community Development Corporation (CDC) celebrated the opening of its community garden on July 23 with a garden party (see video above.) Many groups contributed to building the garden, including Bolder Options, Urban Farming, and high school students enrolled in a  construction program, who built a fence and plant stands and will continue to build a gazebo. According to Boa Lee, “The garden is open for residents to come and take food home for their families. It has cilantro, spinach, carrots, tomatoes, collards, basil, sweet peppers, cabbage, squash and more.”

On July 15, the Greater Frogtown CDC garden was the final stop for Urban Farming and Triscuit, who have planted 50 community gardens in 20 cities around the nation in 2010. Triscuit contacted Urban Farming last year with the idea, after the cracker company decided the non-profit’s work coincided with the work they wanted to do.

Taja Sevelle founded Urban Farming in 2005, which began in Detroit with three gardens on unused public land. Sevelle is a former Minneapolis resident and Prince protégé. Detroit is now the Urban Farming’s headquarters.

Urban Farming’s mission is to eliminate hunger in the U.S. during this generation, through planting urban gardens, growing one’s own food and sharing the excess with those in need.

“During World War II, 20 million Americans planted at home,” Sevelle said. “They planted gardens at their homes, and they planted 40% of the nation’s supply, which is almost half. So when you think about that, we’re thinking in terms of getting rid of hunger.” 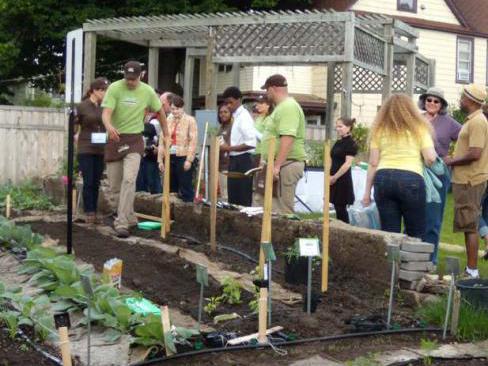 Jill Henricksen, executive director of Greater Frogtown CDC, said that volunteers from the community had initially contacted Urban Farming about planting the garden. Volunteers will tend the garden, which is open to the public. “Anyone can get into the garden at anytime,” said Henricksen. “The back area is fenced off, but through the front is always open.”

According to Henricksen, the garden includes other areas, in addition to vegetables:

This spring we’ve planted well over 200 perennials and will continue to expand that in coming years.  We also have an environmental component:  a large lily pad-shaped rain garden with native plants, seven wood rain barrels that catch rainwater from our main office building and our garage, and low mow, drought resistant grass.  An entertainment and gathering space for events (available for rent for private events!!) and now the vegetable garden for community members to access free healthy food. 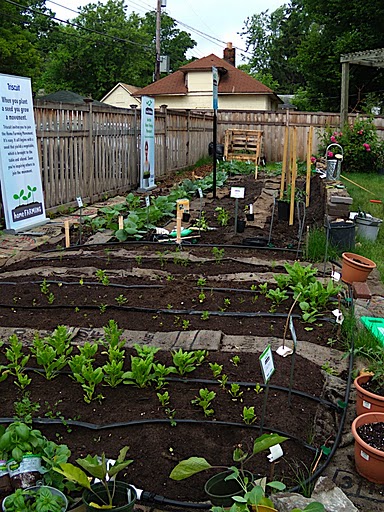