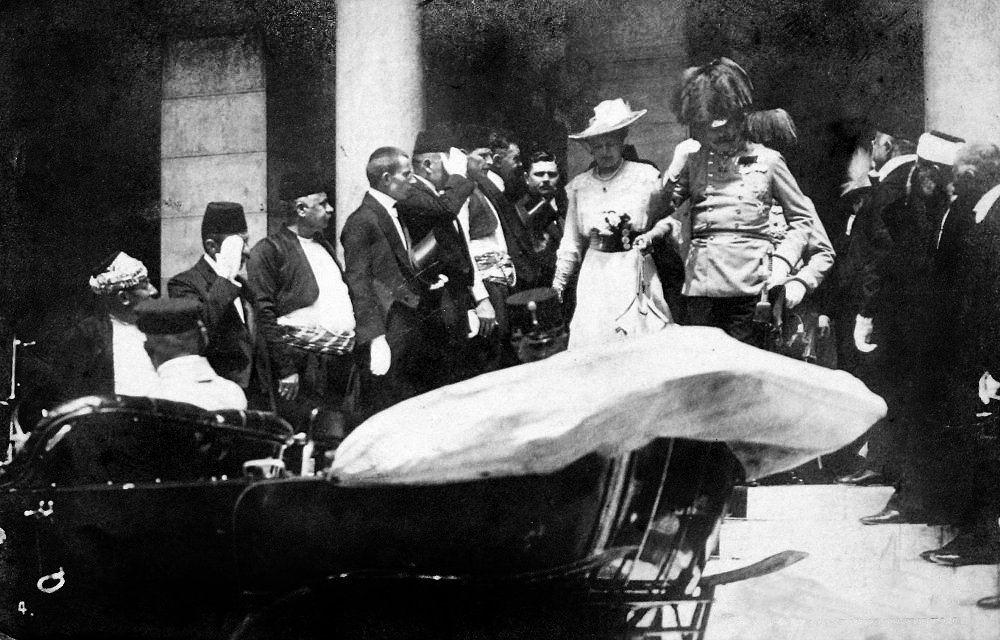 Exactly 100 years ago, on the morning of June 28, 1914, the Archduke Franz Ferdinand of the Austro-Hungarian Empire and his wife Sophie were assassinated when two bullets were fired at them at close range. At the moment, the couple were riding through the streets of Sarajevo in an open car when the vehicle stalled while the driver attempted to turn around.

The assassin, Gavrilo Princip, was one of a team of killers on the trail of the Archduke that day. All were Serb nationalists who laid claim to all regions of the Balkans inhabited by ethnic Serbs, including places that were part of the Austro-Hungarian Empire. Princip and the others were also members of a terrorist organization called the Black Hand founded by the head of Serbia’s military intelligence.

At the time, little was made of the killings. Virtually no one in the public sphere thought the event would lead to anything more cataclysmic than another round of fighting between Austria and Serbia. As we now know, of course, the assassinations precipitated a chain of events that, within six weeks, plunged Europe – and eventually the rest of the world – into the bloodiest conflict in history up to that time.

The leading politicians, journalists and public intellectuals who did not foresee the outbreak of war were equally shortsighted about the course that war would take once it erupted. It was going to be short. A few weeks, a few months at most. Everyone home by Christmas. Everyone in the know was familiar with the deadliness of mechanized weaponry, from machine guns to aerial bombardment to heavy artillery. But until then, such armaments had mostly been used against poorly armed tribes or native insurrectionists in “uncivilized” lands colonized by a European state. In 1914, the best and brightest of the day fully expected that enemy troops would be routed by “our side” as easily as villagers in North Africa or tribal warriors in Southeast Asia.

Once again, we now know different. But who could blame the European powers for their undue optimism? In current parlance, the leaders of those nations lived in a bubble. They were only told what those around them thought they wanted to hear, and they only listened – like elites everywhere, including Washington, D.C. – to those willing to tell them what they wanted to hear.

In the run-up to the Great War’s centenary, the already capacious library of books published about the conflict, like Paul Fussell’s early masterpiece The Great War and Modern Memory, has swelled considerably, including Christopher Clark’s magisterial 700 page The Sleepwalkers.

Among the newer books – it was published in 2011 – The Russian Origins of World War I  by Sean McMeekin should have special value for us in the United States. Not only does it offer an alternative, and convincing, take on who the most villainous player was in the lead up to hostilities in 1914, its examination of Russian policies before and during the war offers critical lessons for America, especially in the Middle East. There our current leaders seem doomed to keep making the same kinds of mistakes Tsarist Russia made in pursuing policies that were simultaneously fickle, feckless, and brutal, based upon premises that were little more than self-delusion. Epistemic cloture is a term currently in vogue for describing the echo chamber in which, for example, the GOP leadership seems to be operating. Epistemic cloture is also a good term for describing the milieu in which Russian leaders operated in the early 20th century. It is an equally apt term for the milieu in which American leaders operate, not just when it comes to the Middle East and Central Asia but, indeed, throughout all of the developing, non-Western world.

The Russian Origins of World War I is a study of the unintended calamitous consequences that inevitably follow misguided decisions in the fields of foreign policy and war. Not only did the Tsar’s secret service collude with Serbian intelligence in helping fund and train the Black Hand, but Russia’s military leaders urged the Serbs to resist Austria’s demands that it be allowed to participate in the investigation of the Archduke’s murder, promising the Serbs in return slices of the Austro-Hungarian Empire’s Balkans domain – territory that Russia was also promising to other nations. Most critical of all, it was news of Russia’s secret general mobilization of its military nearly a week before Germany or Austria that enabled the German staff to overcome Kaiser Wilhelm’s reluctance to rush to war.

Russia’s aim in all this was for France and England, its partners in the Triple Entente, to pin down Germany and Austria long enough for Russia to achieve its real strategic goals – dismemberment of the Ottoman Empire and seizure of Constantinople, which Russia planned to rename Tsargrad.

In a shameful episode that bears a striking similarity to what happened to Iraq’s Kurds and southern Shia when we abandoned them to Saddam Hussein’s revenge following the 1991 Gulf War, McMeekin describes Russia’s key role in triggering the course of events that resulted in the forced relocation and subsequent death of 600,000 Armenians living under Turkish rule. This humanitarian disaster was set in motion by Russia’s decision to arm and train Armenian militia in 1914. When Turkey responded, Russia walked away from its pledge of military support for the Armenians. The Turks, facing an internal uprising along the border with its traditional enemy, reacted, as we know, with unrestrained brutality.

Whatever its proximate cause, however, and whichever nation bears the greatest responsibility for setting it off, WWI was ultimately European Imperialism come home to roost: a homecoming that in 1939 would see the “scientific racism” concocted in the 19th century to justify the conquest of “lesser peoples” reach its apogee with Hitler’s attempt to exterminate Europe’s Jews, Gypsies and Slavs.

As McMeekin’s book shows, the war was also the coming home to roost of the Great Game Europe had played throughout the 19th and early 20th centuries with the lives and territories of people living in the Middle East, the Caucasus, and Central Asia. The ISIS horror show currently on display in Syria and Iraq is yet another consequence of Europe casually divvying up the Middle East without regard to the region’s ethnic or sectarian realities – a Pandora’s Box the U.S. obligingly pried open with its ill-fated decision to invade Iraq in 2003.

Over the course of the century since the assassination of Archduke Franz Ferdinand, Europe would – at the cost of more than 100 million European lives – come to see the error of its ways, turning away from armed conflict as the primary means of advancing national interests.

But if the decades following the Second World War have demonstrated anything, it is that the United States still hasn’t learned the lessons so painfully absorbed on the battlefields of Flanders and the killing fields of Auschwitz and Dachau. We continue to blunder along trying to impose our “civilizing” mission — now termed “nation building” and “democratization” — on lesser peoples, especially in the Middle East and Central Asia (think Afghanistan).

Tsarist Russia, to its ultimate cost, found out how self-destructive its fantasies of hegemony in this part of the world proved to be. Would that we took note of Russia’s fate in 1917 and acted accordingly.

Not that I’m holding my breath. Even now, there is an assassin waiting for us to come into range. Only this time the name of the assassin isn’t Gavrilo Princip. It’s us.

And the gun we hold is aimed at our own heads.