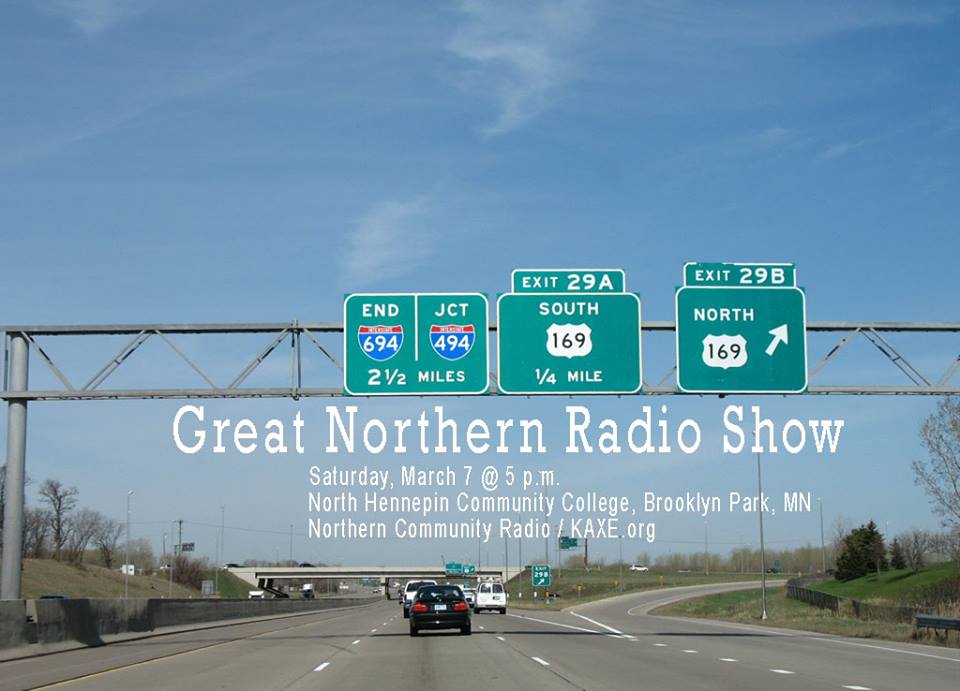 As a kid, my family used to go to see Garrison Keillor and a Prairie Home Companion at the old World Theater (now called the Fitzgerald). I loved it. I loved the idea of being there and seeing the action behind the curtain while some people just listened on the radio. It was like being in on a secret. It’s part of what I love about going to see Real Phonic Radio every month. Now I’m delighted to see one of my favorite non-metro radio programs is bringing their show to town and I get another peek into what radio looks like.

The Great Northern Radio Show is an original production of Northern Community Radio in Grand Rapids and Bemidji, Minnesota. They will be recording a live show this weekend at North Hennepin Community College in Brooklyn Park on Saturday, March 7. It’s their first time in the Cities and they promise to bring their “quirky ultra-local mix of music, stories, and comedy” to local air waves. I have enjoyed the show on KAXE out of Grand Rapids; I’m looking forward to the live show.

The March 7 show features a Twin Cities Americana band with Brooklyn Park roots. The Roe Family Singers are a Monday night staple at the 331 Club in Minneapolis and popular veterans of music festivals all over the country. I happened to see them this week – f you’re a fan of the saw, you’ll love them. The show will also feature electric violinist Stephen Decker, young talent from NHCC, and the exciting jazz funk band the New Sound Underground, a mainstay at clubs around the Twin Cities.

I’m also looking forward to what the troupe brings to us from Northern Minnesota. The Great Northern Radio Players will perform sketches written by Aaron Brown, an award-winning Minnesota author and blogger, and co-writer Matt Nelson, a Hibbing native who now works for the Washington Post. The cast for this show includes North Hennepin student actors John Naumann and Jenny Reierson, and GNRS regulars C.J. Anderson of Pequot Lakes, Sara Breeze of Bemidji, Jason and Louisa Scorich of Duluth, and Brown, a son of the Iron Range who lives in rural Itasca County.

If you can’t make the show – you can always listen online. The March 7 program will air live on 91.7 FM KAXE in Grand Rapids, Aitkin and the Iron Range, 90.5 KBXE Bagley and Bemidji, 89.9 FM Brainerd and 103.9 FM in Ely. In addition, the show will broadcast live on KBEM “Jazz 88” in Minneapolis. The show is also rebroadcast on independent public radio stations throughout Minnesota and distributed as a live stream and eventual podcast on KAXE.