I have been biking a lot lately, and taking the opportunity to explore some of the hidden gastronomic gems along my favorite bike trails.  I bike to work regularly along the Minneapolis Greenway, which runs east to west from Lake Calhoun to the Mississippi River Road, which means I ride past the Midtown Bike Center all the time. But until recently I had never really bothered to explore the offerings at the Midtown Bike Cafe.

The Midtown Bike Cafe definitely qualifies as a hidden gem – unless you arrive on a bike,  it’s very difficult to get there, and it is quite possible to ride by the Freewheel Midtown Bike Center and never know that there is a cafe hidden inside. You can’t get there by car, and to get there by foot you have to either walk there along the Minneapolis Greenway, or walk over from the Midtown Global Market, crossing the Greenway in a pedestrian skyway.

What lured me in was a sign outside the entrance that said “Meet Phil! He slices! He dices! He makes our amazing food!” Phil turned out to be Phil Velo, formerly known as Phil Werst. (Velo is French for bicycle. It’s a long story.)

It turns out that Phil really does slice and dice – all the soups, salads, sandwiches and pastries are made from scratch in the tiny kitchen on the premises. “Amazing” might be a bit of a stretch, I’d rate the food as very good – surprisingly good for a coffee house.

Before coming to the Bike Cafe, Phil worked at the Birchwood Cafe, Common Roots, Restaurant Alma and the long-departed RockStar with Steven Brown. The soups and salads are mostly vegetarian, and many are also vegan and gluten free. The salads change every few days, but seem to be variations on a theme: bowtie pasta with sundried tomatoes and pesto one day, and then with chickpeas, mushrooms and artichoke hearts the next. Soups ($3.75 a cup, $4.50 a bowl) can range from curried tomato and chickpeas in coconut milk to a creamy chowder of potatoes, squash and bacon, or a hearty and delicious mushroom potato soup.

At $4.95, the sandwiches are a bargain – mostly variations on beef, turkey, ham or tuna with cheese and veggies, but a vegetarian sandwich of curried pumpkin hummus with apple onion chutney and greens is also offered. You can get a good overview of the cuisine by ordering a soup and salad combo of three items for $7.50. The baked goods are a new addition to the menu, but they include bars, muffins, and sweet and savory scones ($2- $3.) The cafe also features Peace coffee, espresso and cappucino (presumably delivered by bike), as well as Sebastian Joe’s ice creams.

The offerings seem to vary a bit from day to day, but highlights of my recent visits have included a hearty and delicious mushroom potato soup, and a lively curried tomato chick pea soup in a rich coconut cream base. The cafe is open from 6:30 a.m. to 7 p.m. Monday to Friday, and 8 a.m. to 5 p.m. on weekends. The weekend hours may change in November, but the cafe, and the Bike Center, will stay open through the winter.

I always discover some new food find when I explore the Midtown Global Market – just across the Greenway from the Midtown Bike Center – and the fact that the Sonora Grill has been open since July means that I don’t explore the MGM often enough. The menu is billed as Spanish and South American, but there is also a strong Mexican influence, from the name (a state in Mexico) to the caramelos, described as Sonora-style tacos, and a weekly special of tostadas topped with pork belly and oyster mushrooms. 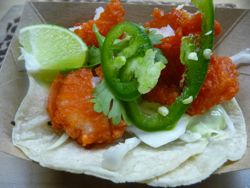 We only tried a few items, including the very tasty shrimp taco, fried in a bright red tempura batter, and served with a cilantro aioli and cabbage ($2.50); the eggplant bocadillo (sandwich) crisply fried in a panko like crust, and topped with cheese, aioli, arugala and tomato ($5.90; $7.90 with fries); and a tilapia salad with a cilantro vinaigrette, olives, lettuce and arugela ($5.90). There is a lot more I would like to try, including the pinchos (skewers) of pork guajillo or beef chimichurri, served with Peruvian rice and guajillo beans ($8.50), and the pork and beef bocadillos.