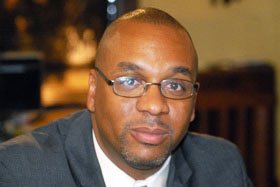 On Wednesday, April 1, 2015, the Minneapolis Urban League Board of Directors announced that Scott Gray will be stepping down as president and CEO to pursue other opportunities. Gray will remain on board with the organization for 30 days to assist with the transition. The Board has appointed experienced community leader, assistant pastor, and attorney Steven Belton as the Interim CEO. Belton and his family have had a strong connection with MUL going back to his early years when his family was honored as an “Urban League Family of the Year”.

“We are thankful for Scott’s leadership over the past 6 years at the Minneapolis Urban League,” said Clinton Collins, Jr., chair of the MUL Board of Directors. “Under Scott’s leadership, MUL has strengthened its programs and partnerships.

We wish him well in his new career and educational endeavors.”

When the Board hired Gray nearly six years ago, he promised innovative programs to lift more Minneapolis families out of poverty. And, he has delivered on that promise. Under Gray’s leadership, the MUL has refined its focus on workforce development, wealth accumulation, college and career readiness, along with health and wellness. In addition, the MUL has served thousands of Twin City residents through its Gateway to Opportunity, which was recently recognized by the National Urban League as one of the most innovative economic enhancement programs in the nation.

“It has been an honor to serve in this Urban League movement for over 10 years with 6 of those years at the Minneapolis Urban League. It is time for me to pursue other career and educational dreams,” said Gray, who recently won a prestigious Bush Foundation fellowship. “I have done my best to provide solutions for those who are the most marginalized in this community. We have created new programing like the 13th Grade, and Big Step that help young adults gain the credentials and postsecondary opportunities critical to earning family sustaining wages.”

Gray added that, “As the Twin Cities become more diverse, MUL is beginning to develop satellite programming into places like Anoka County through an innovative workforce partnership with the Anoka County Workforce Center. This organization is well poised to continue playing a vital role in the Twin Cities. I encourage the community’s continued support of this nearly 90 year old institution.”

Over the next few weeks, Gray looks forward to working with Belton and the Board on the transition plan. “The MUL is a strong and vibrant organization that has served the Minneapolis community for more than 89 years,” said Collins. “As we begin a national search for a new President and CEO, our Board knew we needed a well-respected, compassionate and highly capable Interim CEO to reassure our stakeholders that we will ‘keep the trains running on time’. Steven Belton, a proven leader with deep roots in this community, is the right person for this important job.”