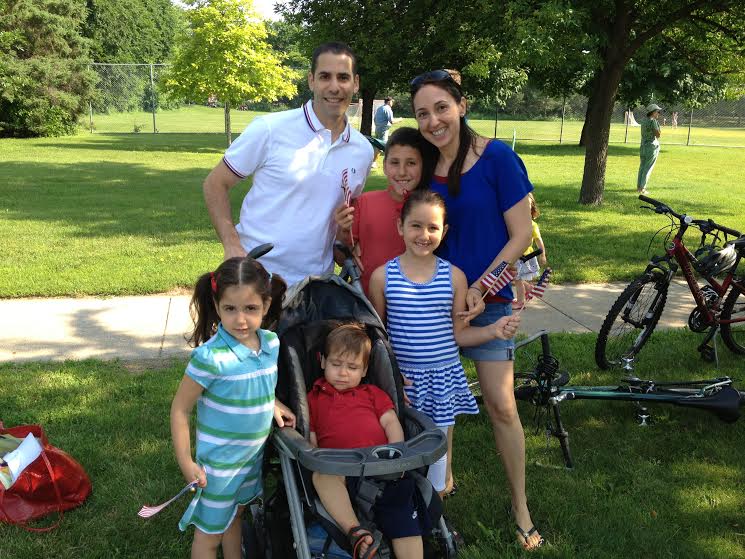 The Fourth of July used to mean a BBQ with friends, then fireworks later in the night (if I could stand the Minnesota mosquitos). Some time in the past few years, however, my husband Bryan has taken over the way we celebrate so that we can teach our kids how grateful we are to live freely as Jews in this country. It’s not that we don’t feel that gratitude during other times of the year, but the Fourth of July is the most natural time to express it.

Bryan’s newer vision for the day has morphed into far more than a day off from work. He makes sure we actively observe the holiday complete with a ceremony, specific foods, clothes, and other rituals.

“Observing” the Fourth of July is an expression I’m borrowing from our Jewish heritage where rituals and traditions are what makes a day “holy.” In the cultural and religious context of Judaism, we tend to talk about the holidays and commandments we “observe” such as saying certain prayers, building a Sukkah, lighting a menorah, and resting on Shabbat to name a few. We also talk about all we do not observe. (I’m looking at you, second day of Shavuot.

If you think about it, to “observe” a holiday is a peculiar term. It implies that we watch others participate, while in reality, we mean the exact opposite. When we talk about religious observance it’s another way of saying that we fully experience, honor, and set aside a day to make it holy. When it comes to the Fourth of July, under Bryan’s direction and enthusiasm, we are now 100 percent observant of America’s penultimate holiday.

I tease Bryan about our Independence Day regimen, but the truth is I’m thrilled that he helps our kids (ages 9, 7, 5, and 2) see the day as more than another meal with Kosher hot dogs. While there’s nothing wrong with a BBQ, that particular ritual does little to express our appreciation for the freedoms America affords us. Here, unlike the European countries of our great-grandparents’ origins, we are free to live as Jews, and even free not to live as Jews if that is something we desire. Our passports do not mark our religion with a stamp that would keep us out of universities and jobs. More importantly, we do not spend every moment worrying about the next pogrom. (Yes, there’s still violence here, but the pogroms were another animal altogether.)

On the Fourth, we focus on the positive. Here’s what our day looks like:

Specific Clothes
It’s rise and shine then dress in anything red, white, and blue. Bryan has spent the last few months searching for the perfect (in his estimation) baseball cap with a picture of the American flag to complete his outfit. Yes, we are those people buying the flag-themed (and likely made not made in the USA) shirts and headbands.

The Parade
Sometimes we attend a parade in our suburb of Minneapolis, but Bryan’s favorite one is in a town near his parents’ cabin because it has all the Americana atmosphere and pride one would expect on Main Street, U.S.A. There’s a flag in every hand, and our red, white, and blue outfits fit in perfectly. We especially love that the parade includes a chance to thank the men and women of our armed forces.

Bryan Leads a Special Ceremony
At some point in the late afternoon before the BBQ that we still do, Bryan gathers the family for a Fourth of July Declaration Ceremony, an idea he found through an online resource called Prager University, a site with videos that teach life lessons and wisdom in five minutes or less.

Like the ritual of the Passover Seder where we tell the story of the Israelites’ exodus from Egypt and journey to freedom, the Fourth of July Declaration aims to keep the memory, history, and significance of America’s creation alive. The supplies include: ice tea; salty pretzels; a bell; strawberries and blueberries dipped in whipped cream; American coins; printed, unsigned copies of the Declaration of Independence; and an American flag. You can print off the brief reading materials here if the idea sounds appealing.

By the time the sun goes down, you can find us covered in layers of bug spray while participating in the more typical tradition of fireworks. We try to carry that light of gratitude all the way to the end. “These fireworks,” we tell the kids, “they’re to remind us that today is a celebration of the birth of our country.”

And no, we do not teach them that America is a utopia, but if our ancestors who risked everything to get here could see us now, they’d think we were living in Paradise.