With all of the hullaballoo these days about the 99% and the 1% – or the 47% and the 53% if you’re reading conservative propaganda – it’s worth figuring out which percent (roughly) you’re in. With that in mind, here’s a graph to help you out. 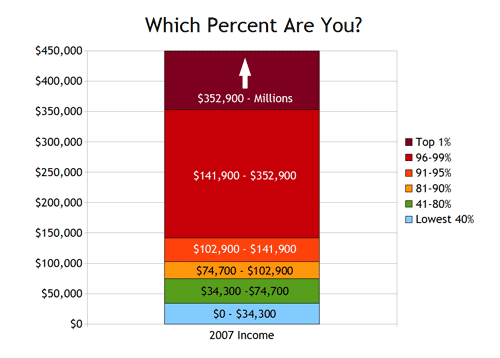 If you’re making roughly $40,000 a year or less, you’re in the 47% that conservatives rag on for not paying federal income taxes (though, as we’ve seen, everyone pays taxes). If you’re making $50,000 a year, congratulations! You’re making more than 60% of the country, but less than one seventh of the richest 1%.

See that giant block near the top? That’s the income range for those in the top 95-99%. What that means is that, even compared to the rest of the highest-paid people in the country, the richest 1% are making a lot more.

Want to look at another way? The lowest-paid person in the richest 1% makes about two and a half times what someone in the 95th percentile does. You could be richer than 95% of the country, and the poorest of the new aristocrats would still make more than two and a half times your income.

The bar for the top 1% should obviously go much higher. If we were to take it all the way up to the highest multi-million dollar income in the country, however, the bars where the rest of us live would all run together. Even to take the top scale up to a million dollars would compress the bottom 90% or so to illegibility.

This is the country we live in. In case you haven’t picked up on this yet, something about our income distribution is broken. One solution would be for the richest to pay themselves less and the people working for them more. How likely do you think that is to happen? Until the culture of the rich shifts to become more civic-minded, we must keep up the pressure for a fairer tax system that seeks in some way to redress this inequality.