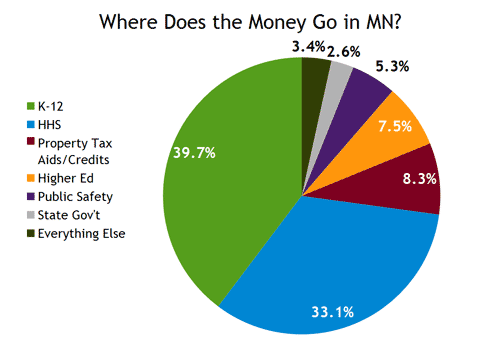 Let’s deal with the obvious part first: more than 70% of our state spending goes to K-12 education and programs with Health and Human Services. The rest gets split between property tax relief, higher education, public safety, the functioning of the state government, and everything else.

What does this mean for Minnesotans? It means that most state spending is either providing services that benefit all Minnesotan communities (the K-12 system, public safety, transportation) or stabilizing our society by supporting those we don’t want to see sick or homeless. Our state’s spending reflects a deep public investment in a healthy, productive society. (This may help explain why our state is one of the few net producers in the country.)

It is this commitment to a strong society that has helped build Minnesota into a fairly successful state. This commitment, however, is exactly what is under attack from modern conservative dogma. Our state functions well because it seeks to cultivate and develop strong communities.

Conservative policies, however, have caused us to cut back on this cultivation and development. Nearly every state budget battle in the last decade settled in favor of conservative shrinkage. As a result, per capita, inflation-adjusted state spending has declined by ten percent, shrinking that pie above. When it comes to education’s slice, real, per-pupil state education spending is down nearly 13 percent since 2003.

Conservatives seem fine watching state support for education dwindle, and with massive human services cuts, they seem fine restricting care for the poor or the sick. Neither of these strike me as particularly moral stands, nor are they right for our state’s well-being.

Minnesota’s past success did not occur despite our tax policy. Minnesota’s past success occurred because of our smart investments. This requires a fair tax system that takes in adequate revenue, and it pays off for everyone. Conservatives who think otherwise should take a look at low tax/low service states, the majority of which aren’t nearly as productive or healthy as Minnesota.