The recent report that the national unemployment rate fell to 8.3% in January garnered all kinds of positive headlines. Minnesota’s been in better shape than that for a while now; although January numbers for the state haven’t been processed yet, our unemployment rate in December was 5.7%. Granted, that has come with fluctuations in the labor force as some people stop searching for jobs, but our overall situation continues to trend upward.

This hasn’t affected all areas equally, however. The Bureau of Labor Statistics puts out information on various industries in Minnesota, and here’s a sample of some of the biggest changers. 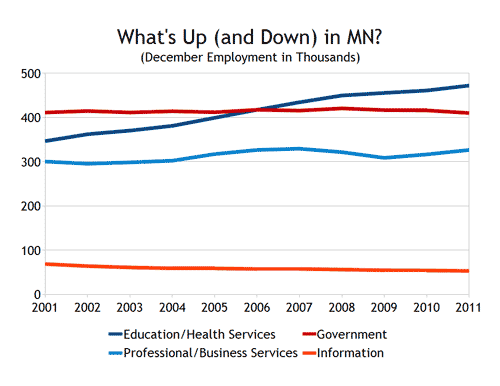 These are the industries employing more than 10,000 Minnesotans that have shown the biggest percentage changes in the past year.

These two sectors combined are responsible for three out of every ten jobs in Minnesota, and the more professionalized nature of many of those jobs helps explain why Minnesota’s overall employment picture is better than the country’s as a whole. Once again, past investments in education, high quality public services, and strong public infrastructure have proved their worth in helping Minnesota weather the economic storm as a good place for professional jobs.

Now for the not-so-good. Government employment, the third biggest employment sector in the state, shrank 1.4% between December of 2010 and December of 2011 (it shrank 2.9% November-to-November). It has persistently declined since the recession hit, in contrast to business/professional services’ rebound and education/health’s persistence as a solid core for job growth. Information services declined 1.8% December-to-December, though that appears to be part of a long-term decline lasting over a decade as much as it is a result of the recession.

Our experience with this recession has shown the enduring importance of investing in the people of Minnesota. As we look further ahead to the true end of this recession, we should keep those lessons in mind when preparing for the next hit.