The past few Graphs of the Day have examined income inequality, and we’ve seen that it’s bad, getting worse, and not dramatically altered by our tax system. So what is the cumulative effect of all this income inequality?

Well, it turns out that when the top households get paid a lot more year after year and don’t have to spend as large a percentage of their income on things like food and housing, they accumulate wealth. This can then be passed down from generation to generation, providing stability and the potential for more growth. The result is today’s graph. 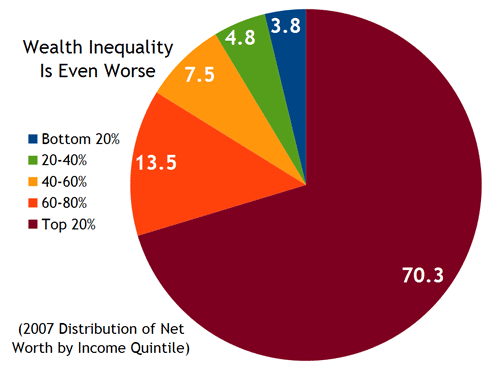 For as bad as the income gap is, the wealth gap is even worse. One fifth of U.S. households (who make just over half of total income) own almost three quarters of total household net worth.

This wealth takes the form of investment accounts, real estate, and other durable property. Even if one of these households loses all of its income, it has a private safety net in the form of its wealth.

A gap like this puts a serious crimp on the possibility of the people on top moving down the class ladder, and therefore also makes it harder for the people on the lower rungs to displace someone and move up. This may be a reason that countries like ours with high levels of income inequality also end up with lower relative social mobility.

The wealth gap also contributes to some of the ongoing conflation of race and class in the U.S. These wealthy families are overwhelmingly white, in part because for much of the country’s early history, the only people who could be in those top income levels were white. Once that economic power got enshrined in wealth, it could be passed down, transformed, and grown over time.

Meanwhile, people who weren’t white were often kept out of jobs that could move them up and—even as late as the postwar period—forced to rent. Even as the GI Bill was helping build a white middle class in the suburbs, real estate practices like redlining kept minorities in rented urban apartments. Suburban houses are wealth; an apartment isn’t.

A wealth gap this big gives children born into the top levels a major, unearned advantage over those born at the bottom. Our policymakers need to know that this isn’t OK.