Whenever a progressive suggests the best-off pay their fair share, conservatives gripe about how overtaxed the richest people are. Today I’d like to talk about why this whining shouldn’t stir much sympathy.

As always, let’s take a look at the graph: 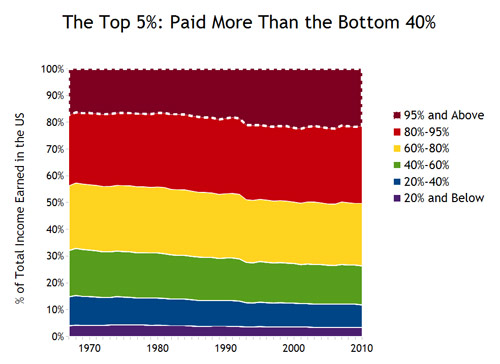 OK, this is busier than past graphs, so let’s break it down. Basically, the size of each colored area indicates how much of the total income in the country went to that portion of the population.

The two big red bars at the top? Put those together and you get how much went to the highest paid 20%. It’s obviously a gigantic chunk, and you’ll notice it’s been getting bigger over time.

From that top 20%, we can carve out the top 5%, the darker red box with the dashed outline. Again, you’ll notice that it’s been slowly growing as the years have passed.

What should be really bothersome is how that top bar is bigger than the two bottom bars put together. This means that, when you add up how much everyone in the country got paid, the 5% of households with the biggest income have been getting more than the 40% of households with the smallest. And this is not a fluke. It’s been true every year for over 30 years of Census data on the subject, and there’s no reason to believe it was ever much different.

So, the next time a conservative goes off about how the rich are overtaxed, remind them that the richest people in the United States put together take home more each year than the poor and a sizable chunk of the middle class combined.