For the next few months (as with the past several), we can expect to hear conservatives invoking the name “Obamacare” as if it was a curse word or some abomination blighting this country. They’ve got themselves freaked out about imaginary death panels or the dreaded “socialized medicine” that they’ve completely missed the fact that Obamacare, formally known as the Affordable Care Act, is doing its job and helping out regular people. 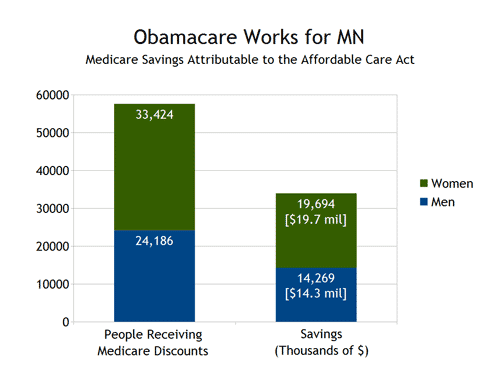 (Data from the Centers for Medicare and Medicaid Services, for 2011)

This is just a taste of Obamacare’s effects for Minnesotans. In the last year, it has helped nearly 60,000 of our citizens get discounts on prescription drugs including medications for the management of blood sugar, cholesterol, asthma, blood pressure, mental health conditions, blood platelets, and cancer. This saved those folks almost $35 million just in one year.

That’s $35 million available for other spending or social support. For some beneficiaries, their savings mean that they personally have more to spend elsewhere. Others would have had to rely on their families or on private charities for support, and now those family members and social services have more to spend on themselves or on other people in need.

Let’s also not forget the long-term savings that come from making prescription drugs easier to come by. Some Medicare beneficiaries would have needed to forgo or cut back on medication without Obamacare, increasing the chance of a more expensive emergency or complication down the road. By helping people take better care of themselves, Obamacare helps our society as a whole save more.

The bottom line is that Obamacare is about shoring up our social safety net, something which has taken too many hits through a combination of economic recession and the misguided conservative obsession with “austerity.” Now more than ever we need strong public investment in our most vulnerable citizens.