All right, we’ve had a few days of pretty intense graphs about income inequality and employment, so today we’ll dial things back a bit by introducing one of our old friends (corporate profits) to our new friend (income).

Let’s go to the graph. 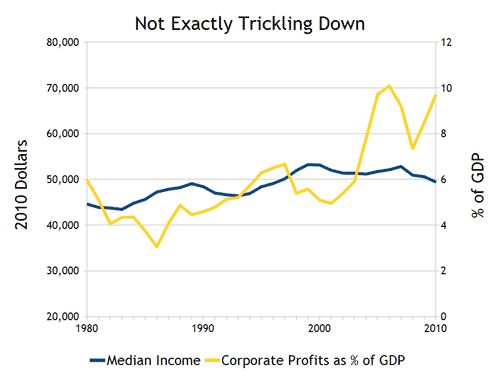 The blue line is simpler; that’s the income for households exactly halfway up the U.S. income ladder, the people who should be the definition of middle class.

We’ve looked at how corporate profits don’t lead directly to job creation, but could they help the middle class some other way? Maybe more money at the top trickles down, and those companies made so much money that they were able to pay all their employees a lot and still report those growing profits.

Unfortunately, that doesn’t seem to be the case. In particular, I want to call your attention to the mid-1980’s, after corporate-friendly conservative policies were well and truly underway under the Reagan administration. Notice how the graph trends sharply upward? It’s been a good time to be a corporation in the U.S. since conservatives started injecting government with supply-side economic theory.

It’s time to reevaluate the conservative notion that what’s good for corporations is good for the middle class. Yesterday’s graph examining employment suggested that public investment to boost demand could grow our economy better than continuing to help big businesses profit in the hope that they’ll share with the rest of us. Let’s invest directly in the middle class rather than enabling corporate greed.