Having made it through a busy holiday season spending time with infographics, regression analyses, and those weird spreadsheet cousins from Ohio, the Graph of the Day is back!

Today we check in with how Minnesota is doing on employment relative to the past several years. 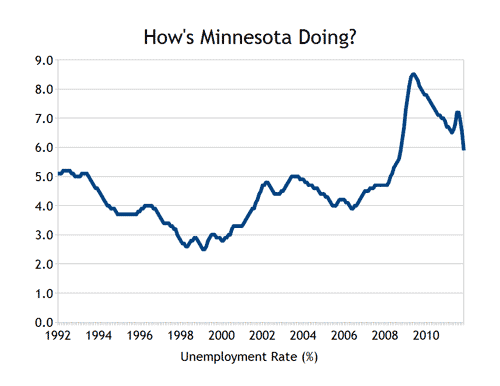 This should stand as a warning to those of us concerned with the welfare of the middle and working classes. Unbridled capitalism, manifested in weak regulations and continuously shrinking taxes, destabilizes that part of the economy which matters most to people – the whole “having a job” thing.

Minnesota is in a better position than a lot of states right now with regards to unemployment (even with an increase in labor force participation over the last two years). However, we’re not out of the woods yet. Progressives need to be able to tell the story of how we got here and what we need to do to avoid a repeat performance a few years down the line.