We’ve looked before at the conservative case for so-called “right to work” policies, better called “right to freeload” or—as today’s graph shows—“right to work for less”. Conservatives argue that this policy creates jobs, but as we’ve seen three different ways, that’s simply false. Several commenters have asked for an evaluation of income and right-to-work-for-less policies. 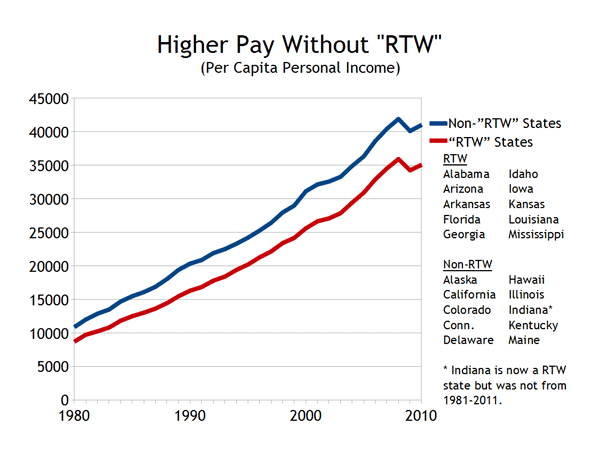 This should speak for itself. Right-to-work-for-less policies fail to create jobs, and they’re correlated with lower personal income.

Correlation isn’t causation, and there are plenty of other reasons why the ten states on top have higher per capita personal incomes (public investments in education, civic infrastructure, etc. come to mind). The point here is that right-to-work-for-less doesn’t do anything good and is more closely linked to less successful governance models.

It’s easy to cherry-pick particular states and argue correlations with right-to-work-for-less policies. The only single state that could possibly allow for reasonable conclusion drawing is Oklahoma (the only contemporary before-and-after case study available), and it’s story isn’t exactly inspiring.

The facts simply do not support the right-to-work-for-less policy. Progressives need to do the hard work of spreading this information to the rest of the public before the issue comes to a vote in November.