Last fall, the United States hit a record high for the number of 25- to 29-year-olds with at least a bachelor’s degree. That number: 33%

Why does this matter? In the running debates about education and equity, it’s taken as a given that the goal should be to get as many kids as possible into college. Aren’t we always hearing about how 70% of the jobs in the future will require postsecondary education? Doesn’t that mean we need drastically more students getting bachelor’s degrees?

Let’s go to the graph: 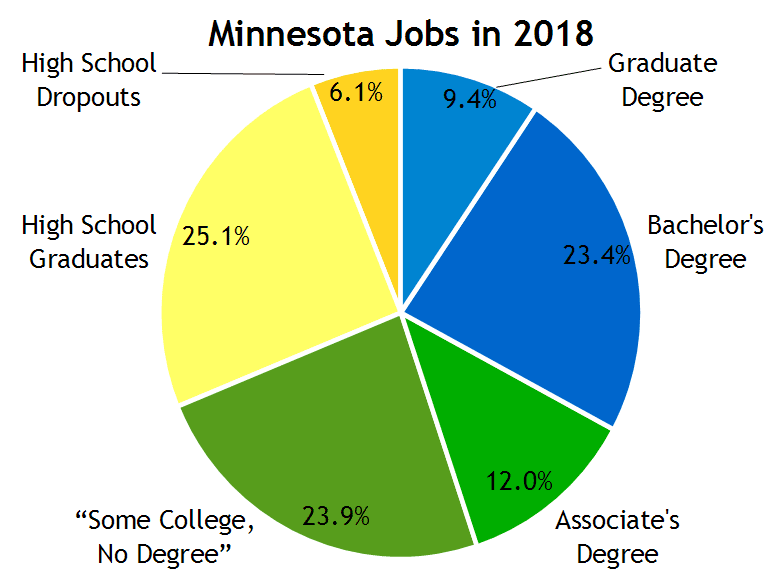 (Data from the Georgetown University Center on Education and the Workforce [PDF].)

This is a projection from one [PDF] of the studies arguing that we need more college. In the future, roughly two-thirds of Minnesota jobs will require more than a high school education, and that share will keep creeping upward. Another way of looking at it, though, is that roughly two-thirds of jobs will require less than a bachelor’s degree. (Also, there’s good reason to believe this overstates the actual demand for postsecondary education.)

This is not to say we should discourage students from getting bachelor’s degrees. After all, the jobs that require bachelor’s degrees tend to pay much better and be more secure than those that don’t, and our educational equity gaps mean too many people of color and people from low-income backgrounds are missing out on those opportunities.

It is to say that we can’t put all of our eggs in the bachelor’s degree basket. Policies focused primarily on four-year degrees when a much cheaper two-year degree or less will get you the job set students up for unnecessary debt at a vulnerable point in their lives. Minnesota 2020 has covered the burdens of student loan debt several times. We don’t want to pressure a student onto a four-year track only to see them drop out after a year and a half with several thousand dollars in debt and no credential.

Another piece of this is that, even in Minnesota, we need to pay closer attention to the wages, working conditions, and living standards for everyone without a bachelor’s degree. Those equity gaps in education – wrought over our entire history – will take time to close, and we can’t abandon two-thirds of our population while we do it.