There’s more ways to look at so-called “right to work” (RTW) legislation than simply examining Oklahoma (though there is value in that case study). Most states have either been RTW or non-RTW for decades, which means we have a large national data set to examine to see if there are systemic differences between the two approaches.

Pulling from this store of information, we get today’s graph. 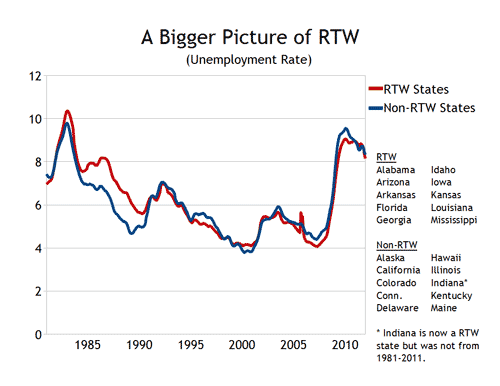 Both sets of states are broadly representative of the larger RTW and non-RTW populations. RTW states tend to skew towards the South, with decent representation in the Midwest and the Mountain West. Non-RTW states also spot the Midwest and Mountain West, but are otherwise weighted towards the Northeast and the West Coast. The random collections of states reflect these general patterns.

This graph compares the two groups on unemployment rate to see if there are serious differences between the two groups. With the exception of the late ’80s, the two lines are very, very close. During the late ’90s, RTW states experienced higher unemployment rates than non-RTW states, though I’m willing to bet that’s a result of other economic factors and not solely RTW laws.

Once again, we see that RTW doesn’t do anything for new job creation. It just makes conditions worse for those that do have jobs in the industries most affected by RTW. Minnesotans should question whether weakening our workers for no reason really reflects our values.