Today we get to look at something I’m sure many of you have been chomping at the bit to examine: the infamous 1%.

Without further ado, here’s the graph. 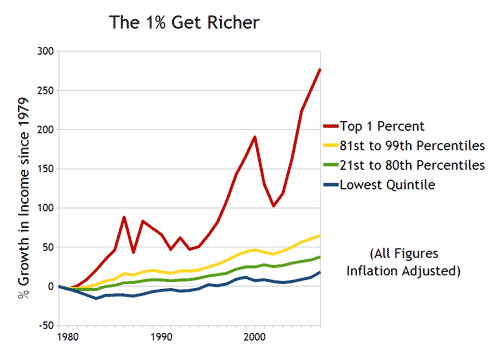 This graph shows how much each segment’s income grew since 1979. See how the blue line at the bottom dips below 0% from 1980 through the mid-90’s? That means that the lowest-paid 20% of the population was making less money during those years than they were in 1979.

This graph chunks the population up a bit differently than the past several have, in part for simplicity’s sake. The green line (second from the bottom) represents the middle 60% of the population by income, merging the middle three quintiles of past graphs.

Of particular interest are the top two lines. The yellow line representing the 81st to 99th percentiles of income is certainly higher than the middle class, but it’s at least still in the neighborhood. The real action is in the top 1%, whose cumulative income in 2007 was 277.5% bigger than it was in 1979.

At a basic level, the story of this graph is one of growing income inequality; the higher up the income ladder you go, the faster your income grows. This is a fine system if you’re reasonably well up the ladder, but if you’re not, it’s rather terrible. (This is especially true since, as noted before, income inequality has a greater effect on the general welfare than per capita GDP in developed countries.)

At a deeper level, however, the story is even worse. This is the story of a country with a largely unacknowledged aristocracy. They may not have titles as the aristocrats of old did, but there is no question that a tiny percentage of the population is rapidly growing much richer much faster than the rest of us.

There is no longer even a hint of meritocracy about this. Are we really to believe that the 1% have been working that much harder than the bottom 99% all these years? I think not.

I doubt that executives are working that much harder than teachers, cops, firefighters, construction workers, nurses, factory workers, or their own assistants. Anyone who claims that the 1% “earned” their position through “hard work” needs to get called out.