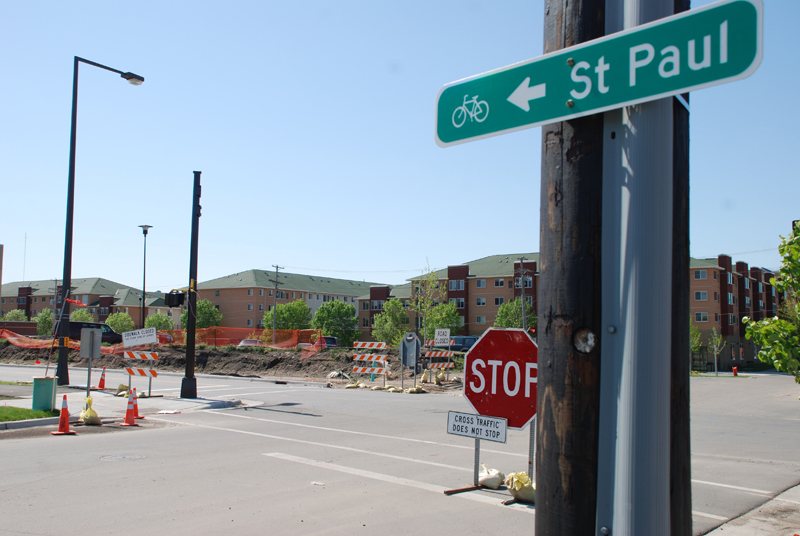 A sign indicates a bike path that will connect campuses along the intercampus bus expressway in the foreground with light-rail construction beyond. Below: industrial recycling and container multimodal shipping are among the industries in SEMI that need truck routes. Photos by Bill Huntzicker, map from Minnesota Daily.

A bicycle and pedestrian greenway may be the most cost-effective transportation use of the railroad trench through Dinkytown, while new truck routes could increase access to I-94 and Minnesota Hwy 280. This scenario was among more than 16 options considered over the last several years by planners, architects and neighborhood residents looking at the Granary Corridor around the University of Minnesota in Minneapolis. Transportation engineer JoNette Kuhnau presented their Granary Corridor Study to about 80 neighborhood residents and other stakeholders on May 9 at Van Cleve Park in Southeast Minneapolis.

Their report, maps, options and scoring process for design alternatives will be posted on the Minneapolis Public Works website for public feedback, said Kuhnau, an engineer with the consulting and planning firm of Kimley-Horn and Associates Inc. The comment period will be “open ended” at least for the next several months because significant development may be way into the future, said Kuhnau and Heidi Hamilton, deputy director of Minneapolis Public Works.

The Granary Corridor, which stretches from I-35W on the west to Minnesota Hwy 280 in St. Paul on the east, provides potential links to the Southeast Minneapolis Industrial Area, or SEMI, between Fourth Street Southeast and the railroad yards north and west of the campus.

A resident asked about how the groups would pay for the developments, with estimated costs ranging from $5.4 million for an extension of avenues that reach from University Avenue into SEMI to $62.7 million for full development of greenways and streets reaching from I-35W on the west to Hwy 280 on the east. Hamilton said a variety of stakeholders would benefit, but no one knows who will pay for it. “It’s a little controversial,” she admitted. “We’ve backed off the funding issues. That’s a discussion we’ll be having for a long time.”

A major challenge is the increasing truck traffic created by SEMI’s growth. Planning for Granary Corridor has been transformed from a discussion of traffic to a comprehensive plan to encourage industrial development and to consider the other planning issues. Traffic flow, of course, was among the factors worked into the evaluation of each of the options.

Kuhnau outlined a scoring system used to create a cost/benefit analysis that considered ways to improve the area’s liveability, environmental quality, vehicular traffic flow, other transportation modes (bicycle, pedestrian, public transit), economic development, and consistency with other city plans. Kuhnau said her group has tried to produce results that were as objective as possible in weighing costs and benefits. “We tried to keep at the objective level to present what we have found,” she said. “The full-length greenway and full build of the development have the highest costs and the highest scores, but SEMI access reaches a point of diminishing returns in which full access can be provided at lower cost.”

None of the plans cross the railroad tracks to connect to Kasota Avenue, but development still requires complex negotiations with the Burlington Northern Santa Fe Railway for rights of way and land acquisition. Expansion of truck routes to Highway 280 would require participation by the city of St. Paul. Other stakeholders include the Minneapolis Park Board, the University, and the three Southeast Minneapolis neighborhoods. 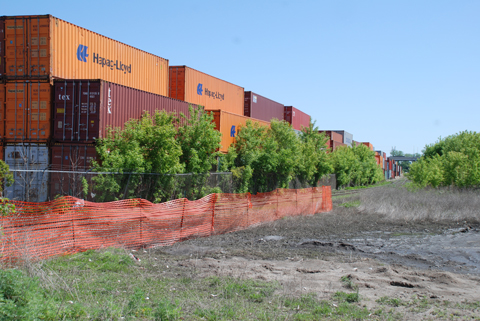 Projects already completed, Kuhnau said, include the extension of Malcolm Avenue and 25th Avenue north to the railroad tracks. These are consistent with the SEMI/Bridal Veil Master Plan of 2001 and the Central Corridor LRT Plan of 2008. The planning group had large public meetings with all the stakeholders in July and November 2011 and monthly meetings with representatives for the past couple of years.

The park board plans to extend its bicycle trial from the riverfront with the idea of eventually linking to bicycle trails on the north side of the railroad tracks.

Peter Wagenius, policy director for Mayor R.T. Rybak, said another bike trail across the old railroad bridge No. 9 could link the St. Paul, East Bank, and West Bank campuses with downtown Minneapolis by the end of the year.