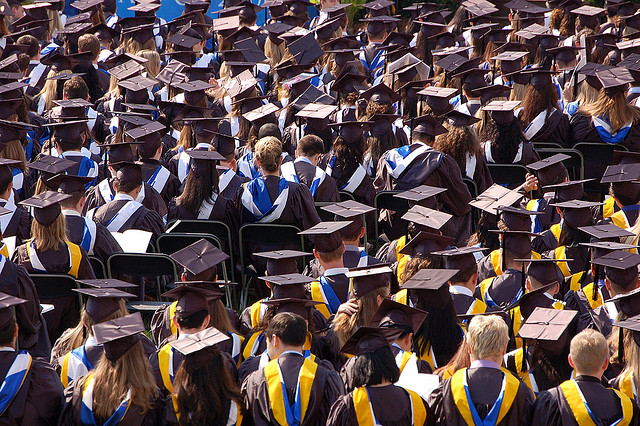 With graduation season in full swing, the Education Research Center’s Diplomas Count reports that more young adults are graduating from high school than at any time since 1973. The national graduation rate has risen by eight points during the past ten years, to 74.7 percent. “At the current pace of improvement,” Education Week reports, “the portion of students earning a diploma could surpass the historical high of 77.1 percent within the next few years.”

Minnesota’s graduation numbers are better than the national average. At 80.4 percent, our graduation rate is the tenth-highest in the country. (For a note on how graduation rates are calculated, sidebar.)

Not all the news is good

“Only 4.3 percent” is still a lot of young Minnesotans — approximately 19,000. “Recoverable youths” is the term the report uses for the young adults who are out of school without a completed high school education. Whether you call them recoverable youths or drop-outs, they need help. They are not on a path to success.

The ERC report on Minnesota youth finds that slightly more than two-thirds (67.5 percent) of the young adults who have graduated from high school but are not enrolled in post-secondary education have jobs. In sharp contrast, the young adults who are out of school and don’t have diplomas are mostly unemployed. Only 44 percent have jobs.

And the devil, as always, is in the details.

Returning to school after dropping out is hard. BethAnn Berliner studied 1,352 students who dropped out in San Bernardino between 2001 and 2006.

“More than 30 percent returned to school at least once—a handful of dogged souls came back three times—but in the end, fewer than one in five dropouts actually made it to graduation. The rest struggled a while longer, earning a few credits before giving up on high school for good.”

In Minnesota, 70.3 percent of the dropouts come in the 12th grade. I’m not sure how to look at that statistic. Maybe Minnesota drop-outs already have earned more of the credits they will need to graduate, so they should have an easier time returning and completing school? That might give Minnesota a better chance for “recovery” than other states. Or maybe something else  is at work — maybe students in Minnesota are being pushed out by inability to pass the exams required to graduate? If anyone knows the explanation, I’d like to hear it.

Minneapolis’s We Want You Back campaign, begun in 2010, is one of the programs that works to “recover” the young people who leave school without graduating. They do GRAD testing, credit analysis, assistance with school placement and, for those who are 21 or older, assistance in finding an Adult Basic Education program.