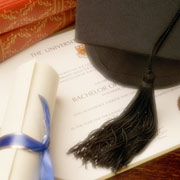 What does it take to be a Minnesota public high school graduate? According to the Minnesota Department of Education (MDE), a student must complete at least 21.5 course credits. Four of the course credits must be in language arts, three in mathematics, four in science, 3.5 in social studies, one in arts, and seven electives. A student must also pass the Graduation-Required Assessments for Diploma (GRAD) tests.

Minnesota’s 2011 four-year high school graduation rate was just shy of 77%, according to MDE.

The NGA’s hope was aimed at curbing inflated graduation rates. Many states, including Minnesota, previously used the more inclusive National Center for Education Statistics (NCES) graduation rate, which only reported students as graduates or dropouts.

While the NGA graduation rate is a more accurate measure of four-year graduates than the old standard, the graduation rate alone still shouldn’t be too heavily relied upon to indicate a school’s success or effectiveness. Looking at graduation rates doesn’t show the astounding leaps that some schools have made in moving non-native English speakers or students with disabilities towards graduating, whom it may take more than four years to graduate, or whom may opt to get their GED instead.

The four-year option is the most cost-effective in most circumstances. However, for some students that simply isn’t realistic. Students with disabilities, students still trying to grasp the English language, and students without any home support may take more than four years to get their diplomas. Over the long-run, it is in the public’s best interest to ensure these students take the time they need to master the material before getting rushed out the door.

Schools helping “continuing” students (those who don’t graduate in four years) receive diplomas shouldn’t be stigmatized. What matters most is making sure that Minnesota high school students graduate with the knowledge they need to be successful after high school.