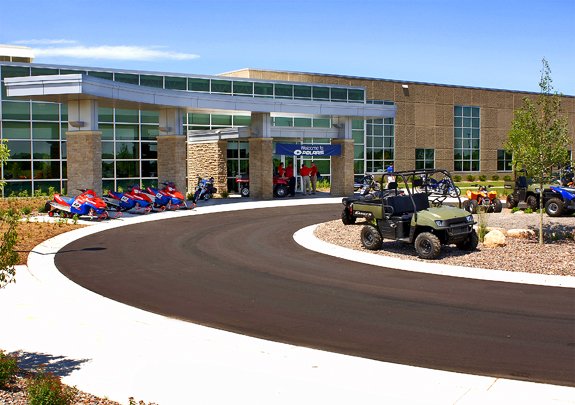 In 2013, Polaris Industries completed a $20 million expansion that doubled the size of its research and development facility in the GPS 45:93 region.

While the Twin Cities and Duluth have historically been the bosses when it comes to Minnesota economic activity, five counties nestled in between are now getting a second look by developers and site selectors for a whole host of reasons.

Over the last two decades, what is called the “GPS 45:93” region of Minnesota—comprised of Chisago, Isanti, Kanabec, Mille Lacs and Pine counties—has enjoyed tremendous population growth.  From 1990 to 2010 the 5-county region welcomed more than 54,600 new people.  The region’s population increased over twice as fast as the state average, jumping nearly 50 percent as compared to 21.2 percent statewide.

With that growth, the Twin Cities pushed a little further into the countryside and Mille Lacs County was added to what is now a 16-county Twin Cities metropolitan statistical area (MSA) because now more than a quarter of its workforce commutes to the core counties of the MSA.   Chisago County was added to the MSA in 1973 and Isanti County in 1983.

As the community development director for the City of Pine City, in Pine County, I have a front-row seat to observe what’s happening. Urban Minnesota is reaching ever more toward us but it is because of what is offered here.  Places like Mille Lacs County, and much of our region, are gateways to Minnesota’s natural amenities.

For example, at the north end of Mille Lacs County is Lake Mille Lacs, a statewide destination for those who love nature, fishing or other forms of outdoor recreation.

Pine County borders the Twin Cities MSA to the south and often people are surprised to learn that Pine City is just six miles from the metro.  Both Pine and Mille Lacs counties are home to a Grand Casino, the largest employer in the region.   Other major employers include Hazelden, and the more recent additions of Polaris Industries and Andersen Windows, in Chisago County.

With the growth has come more opportunity.  The GPS 45:93 region now has more workers for jobs, and a more qualified workforce.

And while much of rural Minnesota is losing jobs, this region—a mix of suburban, exurban and rural—is bucking the trend.   Even the two most rural counties in the region, Pine and Kanabec, gained jobs between November 2012 and November of last year, according to the latest employment figures released by the Bureau of Labor Statistics.

Besides natural amenities, the region has ample transportation amenities.  It is on Interstate Highway 35 and BNSF Railway’s mainlines between Minneapolis and Duluth, and there is high-speed passenger rail as well as commuter rail in the planning stages.

The GPS 45:93 region is a place of promise for companies ready to relocate or expand just north of the Minneapolis-Saint Paul (MSP) urban core.  There is a reason this part of the state keeps growing, due to our highly-regarded small towns, award-winning schools, reasonably-priced houses and ready-access to employment opportunities here and in the Greater MSP region.

This part of the state also has the closest state-certified, shovel ready land to Minneapolis and St. Paul.  There are hundreds of acres available in the region’s industrial parks.

At its most recent executive committee meeting in Cambridge, May 30, members of GPS 45:93 debated the merits of adding more incentives and tools to recruit business, including the possibility of a regional equity fund.

The concern is that while the region may be a good fit for all other reasons, it has the potential to lose businesses because it cannot put in an equity injection into a new business prospect.  No decisions were made at that meeting to establish such a fund but one of GPS 45:93’s partners, the Initiative Foundation, claimed to offer a suitable alternative in the interim.

According to Sandy Voigt, Initiative Foundation’s development officer, the foundation’s financing programs offer a range of options based on the needs of potential businesses.  The foundation offers an array of programs to meet financing needs for an aspiring entrepreneur, nonprofits with great ideas, existing business owners or referrals from commercial lenders.

GPS 45:93 is a multi-county regional economic development consortium whose mission is to better position the region to attract high-wage, technology based jobs; collaborate on business retention and expansion; recruit new businesses; and encourage entrepreneurial activity.