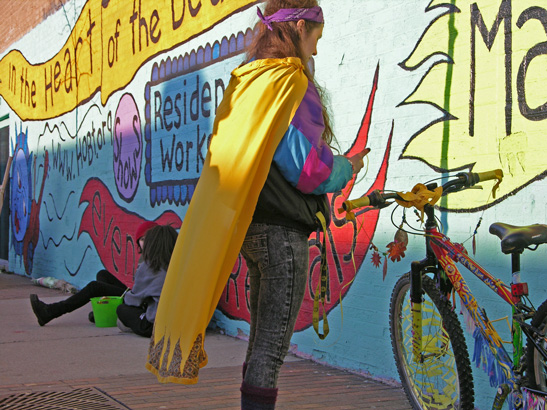 So far this month, there have been three weeks worth of MayDay Public Workshops. The first Sunday in May is this coming weekend. Tradition has held that the MayDay Parade and Ceremony and the MayDay festival is held on the first Sunday of May. Last year the event was delayed a week due to rain fall. MayDay will resume the tradition on this First Sunday of May, May 5 in 2013.

No tradition is sacred when you are constructing MayDay floats and costumes. Tips and tricks of obtaining a theatrical presence and flourish can be gleaned from every corner of the workshop space. How to get good results — quickly and at low cost. Projects spread out in all directions. Ideas flow from all the participants; methods improve with input from, and by observing, others. MayDay is sharing magic. Stencils on t-shirts, and fabric swatches to be pinned on paraders. Activity is MayDay 2013 brisk and swift. Even dogs might display a cape in the MayDay Parade and at the MayDay Festival. That is how We are MayDay.

MayDay Parade starts at 1:00 pm, MayDay Ceremony about 3:00 pm after the Parade concludes.