In an industry beset by unfair credit practices and delays, local roasters Peace Coffee and its parent organization, the Institute for Agriculture and Trade Policy (IATP), are offering an innovative new financing model.The groups are spearheading the Grow Ahead Foundation, an initiative where coffee drinkers can offer guaranteed loans to farmers and be paid back at the end of the season.

While coffee is the second most traded global commodity (after oil), fair trade coffee is a small scale product. According to the Institute for Agriculture and Trade Policy, the farms that provide this product average less than eight acres per farm. Considering the nearly one-year delay between the blossoming of coffee flowers, the ripening, picking, and roasting of the fruit, and ultimately brewing coffee beans in your machine, the business plan for fair trade farmers is a complicated and risky endeavor that relies on loans to cover the start-to-finish process.

Grow Ahead, which was formally launched in September, allows consumers to loan as little as $25 through their website and to later get that money back or reinvest it into the next growing season. If an investor gives $25 today, s/he will receive that money back in the fall of 2013 (without interest).

For the farmers this provides guaranteed funds at the start of the season, rather than waiting nearly one year for a return on investment. With financing through Grow Ahead, the rates are more beneficial to farmers’ needs and a connection is forged between grower and consumer.

“Bridging that gap from production to payday is one of the challenges that small-scale famers face,” explained Lee Wallace, CEO at Peace Coffee. “Pre-harvest financing is an integral aspect of our work.” That work has the primary goal of a new, sustainable model in which coffee drinkers support farmers directly.

Currently in its pilot phase, Grow Ahead is working solely with Apecaform, a Guatemalan coffee coop that has worked with Peace Coffee since 1996. The pairing was chosen in part because of global growing seasons. With the fall launch of the program, Central America was a perfect fit. Apecaform is comprised of 400 farmers in 17 Guatemalan communities and is Peace Coffee’s longest-standing trade partner. 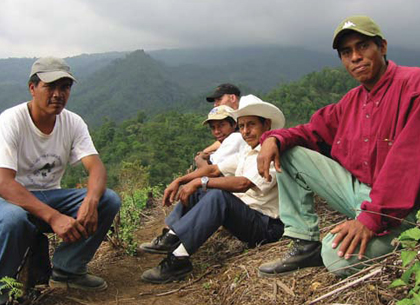 The starting goal, said Andrew Ranallo, communications associate at IATP, is to raise $60,000 to make loans to Apecaform this year, and to see future expansion with farmers from across the world. “This model depends on coffee drinkers to step up and support their farmers,” he summarized. “Since loans are secure, and repaid at the end of the season, the risk is low but the reward is huge.”

The loans are guaranteed by the DOEN Foundation (in the Netherlands) up to $200,000. As extra incentive, Peace Coffee is giving free coffee (12 ounces) to investors for loans of $100 or more.