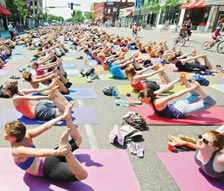 "Gorilla Yogis is a movement, a migration to yoga beyond studio walls. Gorilla Yogis gather to practice urban jungle yoga in unexpected, offbeat places. In parks, on street corners, in museums, art galleries, at cafes, in restaurants, in music venues, on barges on the Mississippi River, on rooftop decks, on farms, in barns, in lofts, abandoned spaces, baseball fields. It's yoga out of captivity. Each month we host donation-based yoga events where we raise money for organizations that are doing hard work to make this jungle an awesome place to live." -from the Gorilla Yogis' website

Respect the unexpected.
Do yoga, do good.
Live in the ohm.
Peace, love and bananas.

As they describe it, how much fun would it be to do yoga in First Avenue to Prince’s “Purple Rain” or at the Minneapolis Farmers Market or to be in the James J. Hill house filled with other yogis?

Two and a half years ago Rosenberg and Arundel realized that besides sharing a passion for teaching yoga, they also thought it would be fun to create an event together. The two planned a yoga session, inviting donations to the Smile Network and put the word out to their friends, families and colleagues. They thought maybe 20 friends would show up, so they were stunned when about 200 people came, raising enough money to repair one child’s cleft palate. The event was so successful that they have staged encore events in different locations for a variety of causes.

In other parts of their lives, Rosenberg works as an industrial designer and Arundel works as a landscaper. They joined with Venticinque, a yoga instructor and photographer. Rosenberg does graphic design and artwork for the group, Arundel coordinates the locations and communications for the events and Venticinque connects with the nonprofit recipients of their fund raisers-all taking a lead in these community yoga sessions.

By design, they aim to run their operation as simply and bare bones as they can. There is no board, no rent, no heating bills, no staff, no studio costs. They dream of unexpected places they would like to do yoga. They consider, as Arundel describes it, “what are the organizations that make this such a cool and great and healthy community to live in? And, what can we do to support that?” They also seek out organizations where a smaller financial contribution will make a big difference, to be more than a “drop in the bureaucratic bucket.”

Over the years they have raised more than $30,000 for causes including Minnesotans United for All Families, Full Cycle and Sisters’ Camelot.

About two weeks before an event the “Troop Leaders” post it on Facebook, Twitter and their website, inviting people to show up at a specific time and place. Participants range in age from grandmothers to little kids and include people with physical disabilities, and people who have practiced yoga for 20 years. They encourage people to show up as they are and be who they are-not worrying if they are wearing the right yoga clothes or have enough yoga experience.

Why do they do this? “The payoff is so huge. When you see the smiles on the ‘gorillas’ faces as they are practicing yoga or whether it is handing over the check … on every level it is fun and exhilarating,” Arundel said.

Where do you see women connecting and making change in your world? Send me your story, magnuson@womens press.com