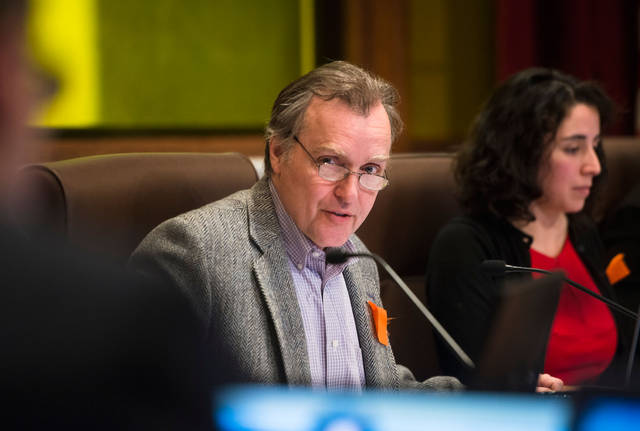 Ward 2 City Councilmember Cam Gordon speaks at a City Council meeting at City Hall on March 20, 2015. At the meeting, Gordon announced his proposal to repeal lurking and spitting on Minneapolis sidewalks as criminal offenses.

The Ward 2 Councilman wants to stop arrests for lower-level offenses like lurking or spitting.

At a City Council meeting Friday, Ward 2 Councilman Cam Gordon announced that he plans to repeal ordinances that made lurking and spitting on sidewalks illegal. Changes would go into effect after next month’s full council meeting if the measure is approved.

Gordon said the need to counter racial profiling in the city is immense, and higher numbers of arrests in certain minority groups can contribute to economic inequality.

“Once you get something on your arrest record, you can end up having a much harder time getting housing and finding work,” he said.

Gordon and Blong Yang, who represents Ward 5, requested stop and arrest statistics from the Minneapolis Police Department in December after a report released last year showed heavy racial inequalities in the realm of low-level offenses, like lurking and spitting on sidewalks.

Between 2009 to 2014, black people accounted for 59 percent of total arrests for lurking in the city, according to an analysis released by MPD earlier this month. The report also shows that blacks are arrested at significantly higher rates for marijuana possession, vagrancy and disorderly conduct.

A similar report by the American Civil Liberties Union  showed that racial inequalities in arrest rates have long plagued Minneapolis.

Gordon said perceived disparities in the city prompted him and Yang to request more detailed statistics from the police department, including who is arrested and stopped, as well as their age, race and location.

“We’re trying to get numbers so we’re not just dealing with anecdotes and stories,” Gordon said.

Understanding the racial dynamics of these crimes also includes more knowledge of who is being convicted after the arrests, Gordon said, adding that he and Yang haven’t yet received this additional data from MPD.

He said city officials can only determine if racial profiling is present if they know cases in which law enforcement officials were called to the scene and those that were initiated by the officers themselves.

Without first differentiating between these types of stops, it could be possible to misdiagnose racial profiling, he said.

Gordon said a deeper understanding of arrests and stops in Minneapolis could reveal whether racial profiling is an issue.

“[Lurking] is something that we use a fair amount,” he said. “We feel it’s been a very effective ordinance for us.”

Because there is no state law against lurking, he said he thinks Minneapolis should keep its lurking ordinance.