Just recently elected Ramsey County Sheriff Matt Bostrom said his office is ending the Gangnet database on Aug 15. This is a victory for transparency and better data.  Better long-term tracking data with more controls is already collected at the state and federal level. And of course, each investigation of actual law breaking has its own files.

The previous Sheriff Fletcher had created a database of gang members, called GangNet, where the criteria is so open, that Sheriff Fletcher’s own name should have been on the database, since he regularly “associates” with known gang members by talking to them and by arresting them, prompting this cartoon from me: 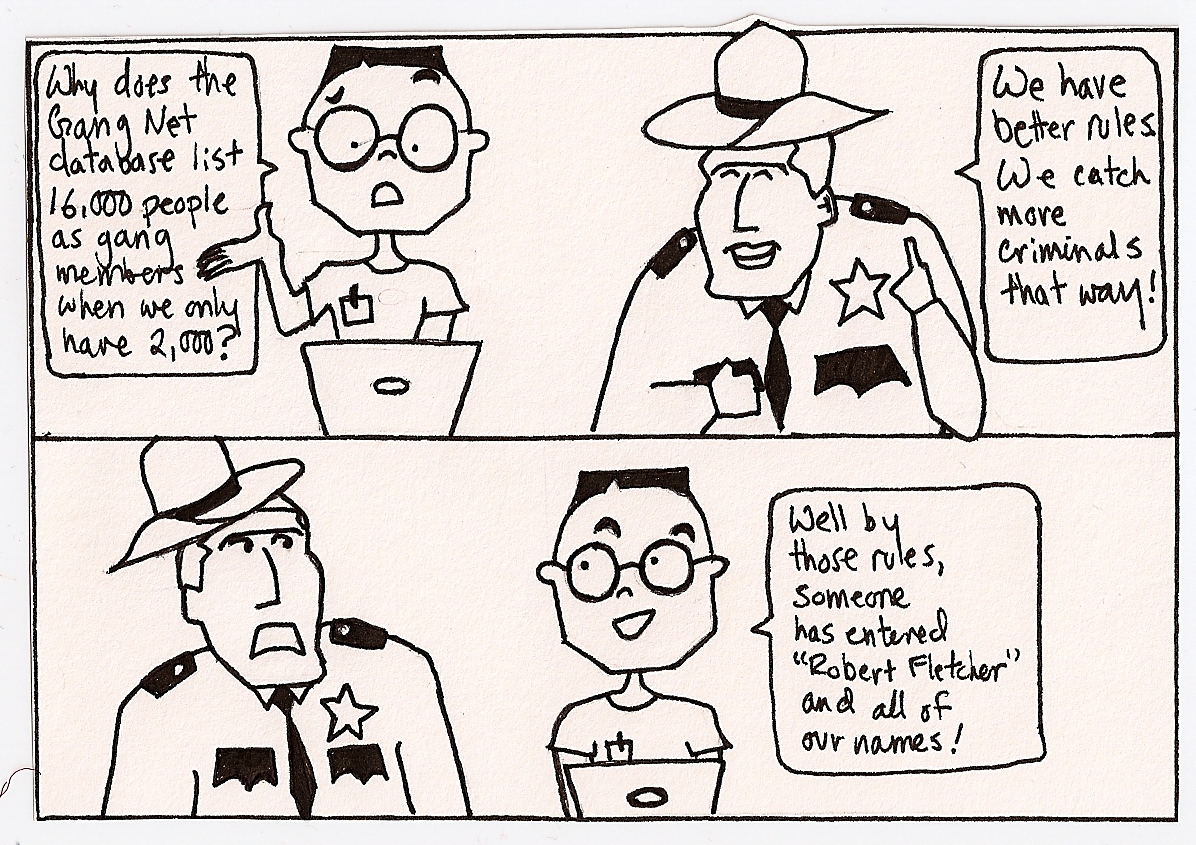 Since the data was kept secret, we will never know how far reaching the effects of that data were. Expensive court trials had shown the bad data in Gangnet was responsible for denying gun permits. More detail here. The Gangnet database ending is good news for creating better government!

Sheriff Matt Bostrom was elected with the promise of putting in best practices which included data transparency. As a candidate, Matt Bostrom promised to audit and review all of the Sheriff’s office practices.

Since Sheriff Bostrom had promised to cooperate and coordinate with other law enforcement agencies, the Sheriff was not going to make the decision about the Gangnet database alone. The decision to end the Gangnet database was decided after 6 months of ongoing discussion with Chiefs, Sheriffs and other key members of law enforcement agencies. Before Sheriff Matt Bostrom had taken office, the Sheriff’s office had ceased entering new data. Controversies about Gangnet database had caused a change in confidence. With each series of communications, it was clear that a consensus was building to end this database. The discussion now evolved to how best to end the Gangnet database, and when to do so. Every agency needs the opportunity to save any key data that they still need before Gangnet ends, if they want to. It was a this point, the someone leaked the plans pre-maturely to the press.

Since the Gangnet database was created, a new state-wide Pointer database was created with better standards, more support and more oversight. So the replacement for the database is already active and in place. Most importantly that type of data is best kept at the state level, since crime does not carefully stay in a county’s borders. The previous sheriff had difficulty in letting anything go, no matter how logical that decision was. With a new sheriff, we are getting better decisions.

In this decision, I think the style of newly elected Sheriff Bostrom is coming through. Even when the decision may seem obvious, Sheriff Bostrom is consulting, cooperating and coordinating with other law enforcement agencies. The communities input on this decision was clear and long standing, so the community was part of this decision as well. Instead of public media fanfare, the decisions are carefully and deliberately made. And here is an example of ending something. Usually, we make jokes that government never ends anything.

I think this is an example of what good government looks like.