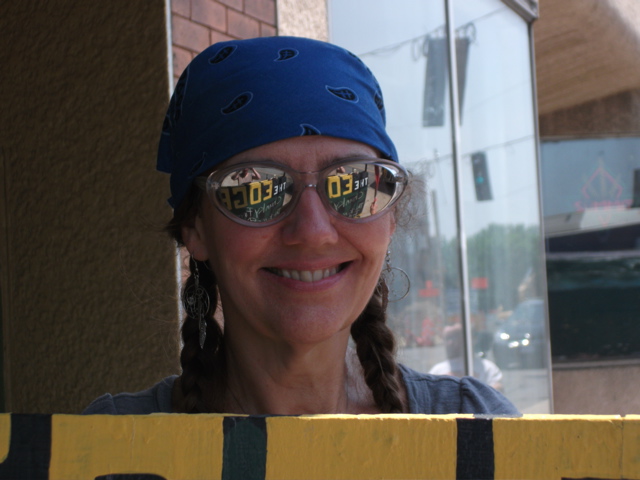 “Good morning is my favorite thing to say,” said Patricia Y, owner of the Edge Coffeehouse on University Avenue.  “And now that I own my own business I get to say it often.”

“My customers are loyal and local.  They live in the area,” said Patricia Y.  “They are artists, lots of nonprofit people, businesses, politicians, and activists.”

She goes by YaYa, a nickname given to her after a long job interview in 2001.  “I was bored and kept saying ya-ya and at the end of interview they wanted to call me YaYa, said Patrica Y.  “The whole time I worked there, people never did know my real name.”

The Edge Coffeehouse was started in February two years ago.  “The coffee shop has been owned by four or five different people,” said Ya Ya.  “At one time it was Susie’s, Prairie Star, and finally The Grind.”  Since 1987, YaYa has lived in Prospect Park and would frequent the coffeehouse. Later she started working at the coffee shop part time and then fulltime.  The previous owners wanted out of the business and YaYa bought it.

YaYa wanted to serve more than a good cup of coffee.  The Edge provides breakfasts and lunches.  Sample soups are potato sausage, chicken tamale, and southwest nacho cheese. Sandwiches and a bakery are offered.  “I make fudge with a secret lethal ingredient,” said YaYa.  “Also people tell me that they dream about my egg salad and it so simple to make.”

Recently, YaYa has been catering boxed breakfasts and lunches; as many as 50 to 75 have been ordered at a time.

“What I like best is working for myself,” said YaYa.  “It is anti-establishment and anti-corporate rat race.” She laughingly says, “I refuse to work seven days a week.”