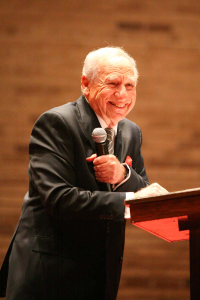 We must start by addressing the most Jewish elephant ever to grace a room ( or in this case, a synagogue) : What the heck was Mel Brooks, iconic comedian, writer, actor, singer, and curmudgeon, doing at the Temple of Aaron in St. Paul, Minnesota?

I really have no idea. Nor did anyone else there. But that hardly mattered.

On Sunday, November 2nd, Temple of Aaron members gathered to honor Martin and Esther Capp, in what was billed as “A Capp-tivating Evening.”* For an outsider, the Capps’ influence on the Jewish community in St. Paul, through their overwhelming generosity, was palpable and duly praised. But I suspect what drew the other 500 attendees to the event was the Special Guest: The 2,000 Year Old Man himself.

Speaking of 2,000 year old men, we should take a moment to appreciate the fact that, at age 88, Brooks should obviously be sitting on a beach in Miami, forgetting whether he was counting his net worth or the surrounding grains of sand. 88 years old! You’d expect most octogenarians, even the most sprightly in their youth, to be pretty tired, somewhat bored, and pre-occupied with the Early-Bird special.

But this was Mel Brooks.

Ever the entertainer, not missing a single beat, Brooks absolutely KILLED IT. With better delivery than most 25-year-olds I know, he landed jokes, issued biting commentary, and, with startling animation, recounted childhood memories in Brooklyn and subsequent sixty some-odd years in show business.

After the third time asking myself that question, I had what I can only describe as a moment of out-of-body self-reflection.

There he stood, this little Jewish man from New York, by his own admission “Jewish in every way besides religion,” cracking jokes to a room of polite Minnesotans.

WAIT A SECOND. What am I even doing here?

Perhaps I’m being a bit self-involved, but for a moment, I saw myself in Mel’s shoes. His momentary stop in Minnesota reflects my own journey here: a stranger in a strange Midwestern land, desperately and sometimes agonizingly trying to convey my worldview. I think some of Mel’s oeuvre might be lost on Minnesotans, by no fault of their own. Some things only we New Yorkers can understand. But it was interesting, and reassuring, watching Mel work the St. Paul crowd.

The funniest line of the night was one that, seemingly, I was the only one to laugh at. Before describing his first foray into show business on a resort in the “Borscht Belt” of the Catskills, Brooks had this preamble: “I want to take you all back…but my car only seats six.” I seriously LOL-ed.

What followed was an extended and hysterical stream of memories. Brooks began with his work at the resort.

“I was in charge of the sour cream.” Hordes of Jews staying at a mountain resort? One can only imagine the great power and responsibility Brooks wielded. “But it wasn’t the sour cream that killed them.” Apparently, it was repeated attempts to hit the high notes of popular show-tunes. Indeed, the not-so-silent killer!**

To Brooks’ chagrin, even Rabbi Jeremy Fine got in on the act with his introduction: “Ladies and gentlemen, there is one man, only one man, who has made so many great films, so many funny moments…one man…who has truly captured the Jewish ethos in America. And that man is…Woody Allen.”

“Alright, that’s enough!” shrieked Brooks as he kvetched his way to the stage.

So what was he even doing there?

For a brief interlude on this Sunday evening, the Temple of Aaron was the Temple of Mel Brooks. It was surreal, for sure, but also seemed so right. It’s a testament to Brooks’ lasting and indelible mark on our society, especially we the Chosen, that he could pop up somewhere, anywhere, and bring down the house.

Walking out, I found myself asking a different question:

Why wouldn’t he be there?

*I kept trying to find synagogue officials and assure them that, in fact, I saw what they did there.

**That’s my joke. Where were you on that one, Mel?

P.S. When asked if there was one movie he could make a sequel to, his answer was “Spaceballs.” OMG.