Are you ready for retirement? While the idea might have its appeal, especially with the winter weather making for long commutes this year, an awful lot of workers are not on a track to be able to retire. That’s according to a survey from the Employee Benefit Research Institute (EBRI), conducted annually. They found that only 18% are “very confident” that they’ll have enough for retirement and a further 37% are “somewhat confident”. That’s up from the 2013 survey, in which only 13% was “very confident”.

The implications go beyond any one family’s ability to retire, however. The decline in workforce participation has been largely due to retirement since the start of 2011, and retirement opens jobs for young people. The wave of retirement that should accelerate after 2017 is one of the main reasons Barataria has hope for the 2020s. But is retirement nothing more than a dream for many workers today?

The survey of 1,501 people, 1,000 workers and 501 retirees, has been performed annually since 1991. By interviewing both current workers and retirees, it contains a complete picture of both expectations of retirement and how retirement was eventually realized over a relatively long period. We can see a lot of where we fit today and how the changing economy influences decisions.

The most prominent feature of the survey this year is that confidence about retirement is a strong function of income, which also correlates with membership in a retirement plan (401k or related). The improvements in confidence over 2013 came almost entirely among people earning $75k per year or more,

The question for macro-economics has always been whether the bad economy would force people to retire early because they could not find jobs or retire later because they did not have enough savings for retirement. The chart below shows the changes over the years: 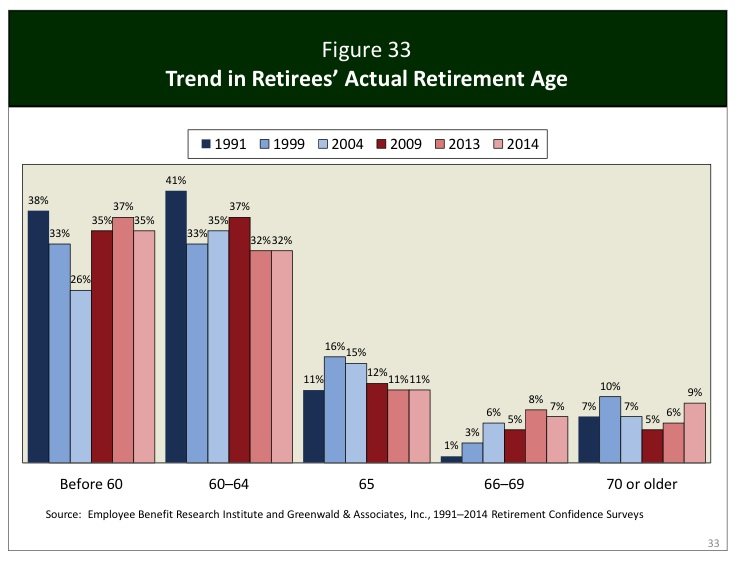 Chart from the EBRI report

In 2004, 61% of all workers retired before they were 65, 15% right at 65, and the remaining 14% later. In 2014, that shifted to 67% early, 11% at 65, and 12% later. There may be a trend towards earlier retirement overall, but it seems to be shifting towards a binomial distribution, or a split between workers who can afford to go early and those who can’t afford to go at all. That may be a reflection of the growing income disparity as much as anything. That’s also shown in the general lack of confidence among those working who aren’t near the top.

Overall the median age at retirement is 63, meaning that if anything the projected retirement of Baby Boomers is going to accelerate even faster than we previously though. By 2020, those retiring will be the heart of the Baby Boom, born in 1957. Workers will be in short supply by then.

But the strain on public assistance will be a great concern if worker’s fears are realized. While 29% are very confident they will be able to pay for daily living expenses (43% somewhat confident), only 17% are very confident that they can pay medical expenses (29% somewhat confident). If workers are right, what will destroy their retirement are medical costs, which a majority figure they won’t be able to pay for on their own.

If these trends continue and today’s employees are right, the net retirement age won’t change much but the social burdens will be much higher. There will be opportunities for young people to enter the workforce and that should result in upward pressure on wages, but taxes are likely to increase to pay for medicare.

Overall, the conclusion is that while confidence in the ability to retire is improving overall, the effects of income inequality will be felt more strongly by those in their golden years. They won’t be as golden as many would like. But there is still reason to believe that the 2020s will be a good era for those looking for work as the retirement wave accelerates.