I spent 20 hours on the boundary between discomfort and pain. I thought of Martin Luther King writing about redemptive suffering and offered my time in the noisy, cold, boring void of the Polk County Jail on behalf of my despondent and discouraged friends in Afghanistan.

I had watched a nearly 4 minute video Hakim had made of my friends Abdulhai, Faiz, and Zekerullah in Kabul before I left for the second day of our drone protest trial. I wept as I heard the despair they experienced in the wake of the recent election run-off and the continued violence and terror in their occupied nation. Listening to and watching them helped me make the decision to take the road less traveled –well, less traveled by most, except the Catholic Workers. Who else would choose 48 hours in jail over paying a $100 fine?

This is part one in a two-part series. Read part two, ‘Doing time in Des Moines.’

I had a premonition of what was to come well before the jury returned with its verdict when the Judge ruled he would not allow a Jury Instruction to include the words “without justification” in the charge of Criminal Trespass, despite the wording of the law as passed by the legislature, before the lunch break on the second day of trial. I took off my wedding band and placed it on the key ring with my car’s remote and my house key. As soon as I was found guilty, I gave Frank Cordaro, my friend from the Des Moines Catholic Worker, my iPad, cell phone, keys, wallet, comb, notebook and pens I had used during the trial so I wouldn’t have to book them into “property” at the jail – after quickly texting my wife that I was headed to jail.

I must admit this wasn’t the first time I’ve chosen jail over paying a fine or doing community service without talking to Christine first. I had at least told her it was a possibility – if the sentence was fewer than 72 hours -because I wanted to be able to continue donating blood platelets every two weeks. Jail time for more than 72 hours would mean I couldn’t donate blood again for a year.

At the last moment before being hustled out of the courtroom I remembered I still was wearing my hearing aids so I handed them to fellow defendant Elliott Adams (who had agreed to pay the fine) to give them to Frank. It is a good thing I kept my Driver’s License since the paperwork generated from the court on my sentencing listed my name as “Douglas Clemens Stephen.” Might be good to have my proper ID to get out of jail on Thursday late afternoon!

We were escorted out of the courtroom by Polk County Sheriff deputies, taken to the lower level of the courthouse, were padded down, surrendered our belts, everything from our pockets (including my “Get out of jail Free” card from the Monopoly Game), handcuffed us, attached a waist chain to the cuffs and added leg shackles on our ankles. We shuffled off to a waiting police transport van with two opposite benches in the rear compartment. The three women had been separated from us in the courtroom so Eddie Bloomer and I ducked and shuffled up and into the van to join two other male inmates who were returning to the jail after court appearances. Noticing my dressier clothes (I had already removed my necktie and given it to Frank), they asked me if I was in for a DWI (Driving while intoxicated). 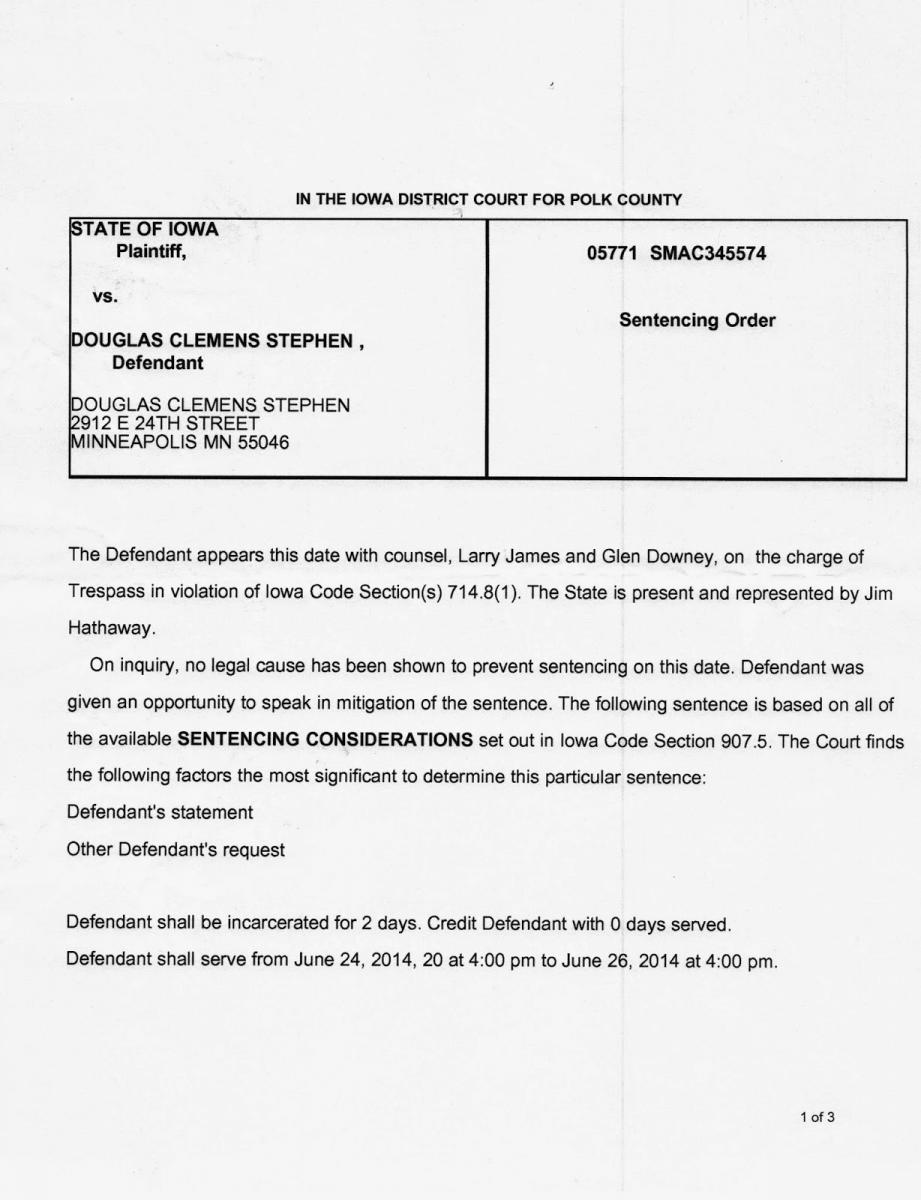 When I told the men I was headed for jail for protesting Drones, the first reaction was “You must be one of the Illuminati!” When I laughed as said I wasn’t sure what that was, the guy said, “Of course you would deny it if you were one of them!” As the conversation continued with what military drones were and that the protest was organized by the Catholic Worker, his face lit up and he told us his brother used to go over to that place. He, too, had eaten meals there. And when Eddie told them he had been living and working at the Des Moines Catholic Worker for more than 20 years, I knew we had just made two allies on the inside.

However, when we arrived at the jail, they had us separated from the other two. They had already received either the two-toned green or the orange-and-white outfits with “Polk County Jail” prominently stenciled on both the pants and shirt. They shuffled into one area while Eddie and I, still in our street clothes –minus our belts – were placed into what felt like a refrigerated holding area after our leg irons were removed. We remained handcuffed to our waist chains for this first stop into the bowels of the belly of the beast. It was a room about 12’ x 20’ with concrete benches attached to the two outside walls which were deep enough to lay down. In the corner was the requisite stainless steel sink/toilet combo. Cement floors, cement block walls on three sides with a large glass window on the fourth, brightly lit – this was where we remained over the next 2 ½ hours as others came and joined us. They removed one handcuff so we could eat our supper of 2 hot dogs with rolls, cooked peas, coffee cake, and milk. We each told a guard if we had any medical issues (and that we weren’t suicidal) and then just waited and waited. Eddie and I made a good team together – he told me what to expect as he’d been locked up here for civil resistance many times – and I helped him pull up his way-oversized jeans that he wore from the Catholic Worker donation box. Without a belt and with such baggy pants, the guard had placed the waist chain through a back belt loop and they constantly made his pants sag in such a way that he’d be welcomed at a hip-hop convention. This for a Veteran in his late 60s!

Next, we were herded into a large area where our cuffs and chains were finally removed, we surrender our street clothes and got orange jumpsuits, brown boxers and a T-shirt, socks, and a 3” toothbrush, toothpaste, soap, and a comb. We had already received bright orange plastic shower shoes at the jail section of the courthouse so at least we were fashionably coordinated!

Eddie and I briefly saw co-defendant Michele Naar Obed across the room in her two-toned green outfit; no sight of the other two women she left the courtroom with. After our photos were taken, Eddie and I were separated for the duration. He told me to try to get a roll of toilet paper to use as a pillow and I was grateful for his advice.

I was placed in a 9×11 cell with a stainless toilet/sink, a 3’ high partial block wall along its side for minimal privacy, and an 8” raised cement “bench” that was 2’x5’ where another inmate was trying to sleep in a fetal position with his blanket. (Each of us was told to grab one blanket as we entered this cell.) Throughout the next 17 ½ hours up to 7 other men came and went with most of the time leaving 4 of us in this cell with no mattresses, a bright florescent light overhead, and our blanket. I claimed the white painted “bench” after the first guy got bonded out and tried to make do with the roll of toilet paper he had been using.

It was cold, noisy, and the bright light was constantly on. One inmate was singing loudly next door; another screaming curses and obscenities at the guard because he claimed he hadn’t gotten his phone call. All night long the heavy metal doors opened and slammed shut, people coming and going, and you could hear the guards chatting away loudly outside the cell door. I was miserable. I was cold, I ached. It was impossible for me to sleep but some of the others were soon snoring loudly.

But I kept thinking of the privations and challenges of my friends in Afghanistan to put my plight into perspective. I had selfishly hogged the toilet paper “pillow” for the night hours. About midnight I was told to see the nurse about my medical history and then back again to my cell. I was disappointed that it was only midnight after seeing a clock en route – I assumed at least several more hours had elapsed. I couldn’t read the clock from the cell as the time crawled on slowly.

While struggling to remain warm, trying to nap on the hard concrete with my aching muscles and bones, I thought of my toilet paper pillow as not much better than the rock the Biblical Jacob used during his vision of the ladder rising to heaven. I didn’t have a dream as vivid or insightful but what went through my mind, over-and-over-again, was the song “By Breath” by the perceptive and passionate Sara Thomsen. “By breath, by blood, by body, by spirit – we are all one …” It connected me to the Afghan Peace Volunteers and my co-defendants – now in other cells. Ruth Cole had so insightfully answered the Prosecutor when asked if she felt in “imminent danger” while standing outside the gate at the Iowa National Guard base. She boldly stated she couldn’t separate her “body” from the bodies of all others around the world who were being threatened by drones.

Breakfast came about 5:30 AM as the cell door opened and we were handed a molded plastic tray with Froot Loops, milk, OJ, two pieces of bread and two tubes of peanut butter. Finally, after lunch, 20 hours after being taken into custody, I was cuffed and chained again and told I was to be taken to “BarneyLand”, my next stop in the belly of the beast we call the Prison-Industrial-Complex.