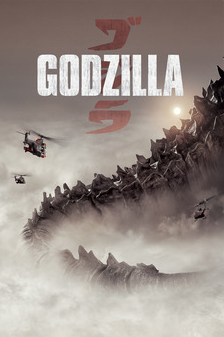 Sometime around 1978 I brought my “Godzilla vs. Amphibion” record to show-and-tell day at Armatage Elementary School. This was by far my favorite record, even surpassing Elvis and disco Star Wars. I was expecting the kids, the teacher, to be won over by how awesome Godzilla was. Godzilla was popular at that time, but still somewhat of a geeky thing. Anyway, they were not won over and they did not respond to the awesome story of Godzilla laying waste to Seattle as he fought Amphibion. On one level I was very disappointed, but an another level it was my first taste of what it meant to like something which was not totally popular and it was delicious.

I enjoyed the 1998 Godzilla, by virtue of it being a daikaiju movie, but I never understood why those people called it a Godzilla movie or wanted to remake Godzilla. They had no respect for the fans and thought they could rework a subculture icon into a mainstream hero. Nothing new there, they’ve been doing that for decades now. In a perverse way, that film was pretty easy to digest, because there weren’t any stakes at all. I knew it wasn’t going to be awesome. Things were quite a bit different for Godzilla (2014).

The initial preview trailers gave me chills, Gareth Edward’s Monsters (2010) was pretty much the sort of monster movie I would make, and if Hollywood has learned anything it is that they really do need to listen to the fans for an established character to work. As the publicity machine moved on, there was less and less to worry about and more to look forward to. Instead of worrying about it sucking, I wondered how I would react if it was totally and completely awesome. Would I be consumed by professional jealousy? Would I feel like my time in this world was done? What work would be left for to do if not a totally awesome daikaiju movie? On another level, I don’t think I can handle a zombie-like Godzilla fad. I just can’t.

Let me say, in the best and most excited way possible, that I do not have to worry about that, yet. Godzilla (2014) is very much a traditional Godzilla movie and one that honors the character and the fans. This will excite the loyalists, attract a new generation and happily alienate all the right people. This is not, of course, much like the first Godzilla (1954) movie, this is much closer to the Heisei and Millennium series of films. “King of the Monsters or saviour of our city?” asks a news crawl in the final scenes of the film, and that ambiguity sums up exactly what this iteration of Godzilla is all about.
So, this puts this film in line with the majority of Godzilla films, sadly apart from the original, but happily immune to the silliness of the lowest points of the Showa era.

I can’t think of a single Godzilla movie in which I think fondly of the human characters. Aside from Dr. Serizawa and Dr. Yamane, none of those actors can really compare with Gojira. The Showa era has a series of forgettable heroes, heroines, and children which always felt more like a way to fill time and save money simultaneously. I suppose, by contrast, it made the actual daikaiju scenes more exciting. Likewise, most of the anti-Godzilla JSDF were just plain annoying. I wanted any and all kaiju to smash those cretins. I hope I was supposed to feel that way.

So, Godzilla (2014) honors this “tradition” as well. Bryan Cranston (Joe Brody) is awesome, but sadly he disappears too soon. (Though as a matter of narrative logic, he had to be removed when he did, what else was a paranoid going to do when all of his conspiracies become mundane?) Juliette Binoche’s (Sandra Brody) loss was tangible as well, she brought a lot of charisma that Elizabeth Olsen (Elle Brody) doesn’t command yet. I guess we need to keep these things on the young side, though. Aaron Taylor-Johnson (Ford Brody) spends most of the film being a slightly clueless hero. You can connect this back to the comic antics of Showa heroes, but I don’t think it was quite that intentional. If the film’s goal was to really highlight the “folly of man”, Ford Brody was a great vehicle for that. Ken Watanabe (Dr. Ichiro Serizawa) gives one of the better performances, doing the lion’s share of the Godzilla backstory. Unfortunately, I say this as constructive criticism, many aspects of his character come uncomfortable close to the “magical negro” trope. His character could have brought even more to the story.

As I said earlier, if you are disappointed by the human performances and you think that affects the quality of the film, you did not go to this expecting a Godzilla movie. You expected a Steven Spielberg movie or a Joss Whedon movie. I’m not saying this a hollow or soulless movie, by any means, Gareth Edward’s talent is to infuse genre with humanity and subtle overtones, and this is in full effect in Godzilla (2014). There are moments of pure cinema genius in this film. There are visions that surpass anything done in a previous Godzilla film. When Godzilla emerges from the smoke and haze, towering over Ford Brody, the soundtrack drops to near silence and this epic portrait is unrivaled. This is the creature I could worship.

There is plenty of other imagery to get really excited about. The opening scenes are filled with homage to Godzilla and his universe. The opening title sequence is a delicious fever dream of paranoia which is pulled directly from Joe Brody’s imagination. The fight scenes are delightfully cinematic and have a dynamism that is natural to the tradition of Godzilla, but also advances the visual language into the modern era. Moments such Godzilla slapping M.U.T.O. mid-flight into a building were amazing and didn’t make me miss the suits at all. Made all the better because lizards actually do that. Trust me, I know.

This is certainly the super-sized version of Godzilla. Everything about it is gigantic (except for his spikes, which was disappointing), and while this has attracted some criticism, to me it feels more faithful to the original than anything else. When I say original I mean the Godzilla that lived on the page before any rubber was stitched together. Gojira, the Japanese name, is a combination of either “Gorilla” or “Monster” and “Whale” (I’ve seen both). Yet, this is the first time, aside from Showa human-like antics, where Godzilla has actually shown primate behavior. His expressions and fighting are distinctly gorilla-like, and I think this sort of attention to detail is what makes Godzilla (2014) something to celebrate.

The M.U.T.O. are a worthy set of adversaries. There aren’t enough insect daikaiju in the canon, so these 8-legged beasties are welcome. Like the best of the enemies, they do actually threaten and overpower Godzilla. One high point of all Godzilla films are when the alien daikaiju have sympathetic moments. Mothra, King Ghidorah, and Hedorah are not completely inhuman creatures. The M.U.T.O. are following nature’s course, eating and breeding as they should, but it just so happens they are millions of years out of place and a threat to everything else on the planet. Like Godzilla, they are not evil, but they will do what they will in order to survive. When M.O.T.U. howl in anguish at the loss of their eggs, it is hard to not feel sympathy.

Honestly, though I was rooting for a final showdown between Godzilla and the remaining military, I was relieved when it took a nap and went for a swim after the climactic battle with M.U.T.O. Godzilla has been through so much, all of us fans have, and it was so nice to just say “so long” to it. We all know you can’t keep Godzilla down, so there was no point putting us through the emotional stress of killing him off pointlessly.

As a point of art, this choice resonates on a much broader frequency, too. The fact that humanity is facing very hard choices in our relationship to nature is no longer a matter of science-fiction films. That moment has passed. While we may not face Hedorah, Destroyah or M.U.T.O. anytime soon, the threats are just as large and just as powerful. I would be happy to have Godzilla around to keep us in our place or to unleash the blue fire of a thousand suns when we really need it most.