I believe my neighbors are trying to poison me. The incidents have been gong on for years. Again three plates of Christmas cookies have been dropped off, and I have no will power. Sugar surges through my veins and prompts me to reach for another bar or cookie, and of course chocolate is a key poison enticer.

Two brothers are part of the plot too. Their method is based on beer, brandy, cashews and peanuts. I am fortunately far more inoculated against those bane medicines, but just as likely to overindulge.

Add to that list of holiday excesses, another neighbor delivered a six pack of mixed beer selections and a bag of carmel corn, and nuts. It was as if trail mix went decadent. The popcorn had a light glaze of caramel and then almonds formed layers of interwoven inducements as they were variously covered with honey or chocolate or simply toasted. And the chocolate covering the almonds was not the ordinary milk chocolate, but the bitter sweet tang of real chocolate goodness. And of course the blend included peanuts.

Now I would not say I eat well, but normally I do not eat as egregiously bad as during these holiday times. I do not expect to gain the will power to regulate my ingestion of the sweets, so I just need to work on the old sour puss facade to counter the jolliness of the feast.

OK now how to work off some of those calories? Coming up is Lake Harriet Winter Kite Festival. The 2010 event is scheduled for Saturday January 9th, with a backup date the following week on the 16th.  http://www.minneapolisparks.org/default.asp?PageID=760 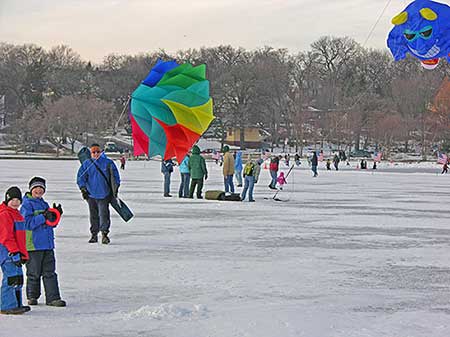