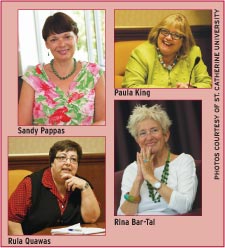 The seeds for the first Global Women’s Leadership Convening, held July 13-21, 2011, at St. Catherine University, were planted a decade ago. While visiting her daughters in Israel, Minnesota State Sen. Sandy Pappas became friends with Rina Bar-Tal, chair of the Israel Women’s Network, a nonpartisan organization that promotes the status of women in Israel.

The Global Women’s Leadership Convening “is such a women’s story about relationships,” Pappas said. Over the past decade, Pappas and Bar-Tal organized groups of women to travel between Minnesota and Israel to share ideas with each other about getting women elected and about programs serving women.

During a 2009 trip to Israel by Minnesota women, led by Pappas, another 35 miles was added when they traveled to Jordan. There they met Rula Quawas, an English professor at the University of Jordan and founder of the gender studies program and the Jordanian Women’s Commission.

Pappas approached both Bar-Tal and Quawas about bringing a group of Israeli and Jordanian women leaders to Minnesota for a leadership training program, with the intent of elevating the level of involvement and setting goals around global women’s leadership. The idea of meeting in a location free of the political and social pressures in the Middle East was of interest to both women.

In Minnesota, Pappas spoke with Andrea Lee, IHM, president of St. Catherine University and Dr. Paula King, dean of the School of Business and Leadership. The idea of a Catholic women’s college bringing over Jewish and Muslim women to exchange ideas … “this is too good to be true,” Pappas said. “Everything fell into place so incredibly, amazingly.”

“We took an emergent design perspective,” King said of the convening planning. “We were here in St. Paul, Rula was in Jordan, Rina was in Israel … there needed to be freedom to move to where the energy and the interest of the group was to create something meaningful.”

“We had an agreement from the beginning,” Pappas said. “All of the women coming had to be pro-peace and they had to agree to set aside their own national or political agendas and focus just on how we learn from each other as women.”

Six women came-three from Israel and three from Jordan-for six days to convene with women’s groups from Minnesota. Sessions were designed around leadership questions to begin the conversation, rather than around a desired outcome. On the final evening, a world café brought together about 125 people to process and create new ideas.

“The bold question [for the café conversation] was ‘how do we prepare and propel more women into leadership roles in public life and civil society?'” King said.

An outcome from the convening process was the acknowledgement that its relationships will serve as the building blocks of the future. Bar-Tal and Quawas are committed to working together on the United Nations Security Council Resolution #1325 that calls for all countries to allow increased representation for women at all levels of government.

While at St. Kate’s, Bar-Tal said the convening experience was remarkable. “The ability for us to meet at a neutral place like St. Kate’s, a place where we have total security, where we can be seen together, we can talk together, laugh together, be angry together, share together, makes this convening different and very special to me.”

“The relationships are there now,” Pappas said. “[We] are talking about how we might support each other, mentor each other, work on other projects together. We think that this has a great potential as a future model for emerging women leaders.”

Planning is under way for the next convening process in the summer of 2012. To join the conversation go to http://globalwomensleadershipconvening.org FFI: email leadandinfluence@stkate.edu or sandypappas@visi.com