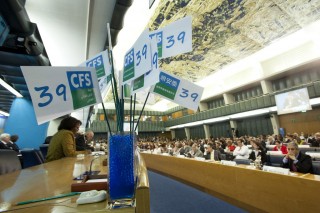 Last week in Rome, the United Nations’ Committee on World Food Security (CFS) agreed on key principles on how governments must address the massive food security challenge that climate change brings. The big news: Governments at the CFS recognized that policies addressing climate change must also support the Right to Food—an important step forward that if taken seriously by governments could result in a major shift in the way agriculture and land use are considered at the global climate talks.

The CFS is a pioneering, and perhaps unique, forum where governments and civil society organizations can work together to define coherent policies to meet the world’s food and agriculture challenges and reduce global hunger. Global warming has been considered the negotiating territory of the UN Framework Convention on Climate Change (UNFCCC). Agriculture has been a controversial, albeit minor, subset of those extremely contentious negotiations since 2008.Those talks have focused primarily on how to legitimize carbon accounting schemes to “offset” the climate footprint of the biggest polluters; rather than how to create a “sea change” in the way industrial agriculture is practiced and how to enable the agriculture sector to adapt to climate change. Though the UNFCCC acknowledged the effects global warming would have on food production, and the global imperative to avoid disruption of food systems from climate change, the negotiations have done little to assess governments’ proposals in the talks and their real impact on the Right to Food for millions of people. In fact, when it comes to agriculture, the proposals in the UNFCCC have been heading in the wrong direction.

Thus, when the CFS asked its High Level Panel of Experts (HLPto undertake a report on Food Security and Climate Change outlining key actions that governments should take at both global and national levels, IATP as well as numerous other organizations saw it as a critical opportunity to set things right on the climate and food front. We expressed our concerns through a letter to the HLPE in the drafting process, as well as in depth comments on the essential elements that should go into the report.

Informed by the report, governments came together last week at the CFS to agree on the decisions they would take on climate change to “promote greater convergence and coordination of policies on key issues that affect food security and nutrition.” Unlike the climate negotiations, civil society organizations (as well as a representative from agribusiness) were in the room to negotiate this “Decision Box.” Though the Decision Box is not “hard law,” or mandated obligations, adopted by member states of the CFS, it does add to the body of “soft” law that provides guidance and directives to member states and intergovernmental organizations to follow. Given that these same member states who agreed to the decision box then negotiate in other foras, the set of decisions is a reminder of what they agreed to with regards to food security. The strength of its application lies in how seriously governments and intergovernmental bodies take the CFS, the need for coherence in the global governance of agriculture and their commitment to food security.

Over three full days of statements and negotiations, including a 14 hour-day, governments and CSOs haggled over language on what governments would ask the CFS and its member governments to do (the final documents will be posted on the CFS website in the next few days). Those of us fighting to get the Right to Food acknowledged and accepted as a key principle for addressing climate change were triumphant. The decision box accepted by the CFS included the following guiding principles in the decision:

The Committee reiterates the role of the CFS in promoting greater policy convergence and coordination with regards to food security, and recognizes that the adverse effects of climate change can pose serious threats to food security especially to small scale food producers’ lives and livelihoods, and to the progressive realization of the right to food in the context of national food security, and urges action.

The Committee recognizes the responsibility of member states to ensure that their policies, programs, actions and strategies are fully consistent with existing international obligations [such as the Right to Food], including food security related commitments.

It is critical that governments begin to own the Right to Food and ensure that proposals to address climate change truly allow “human beings to feed themselves with dignity.” If governments negotiating at the UNFCCC follow through on their CFS commitments on climate change, it could create new urgency to prevent the collapse of food systems and prioritize agriculture adaptation for small scale food producers that are so essential to global food security. It would also ensure that proposals to address land use change in no way undermine peoples’ rights to access, availability and affordability of food. The agreement therefore was a major victory given that the politics of the climate talks threatened to jettison a decision at the CFS altogether.

The U.S. and Brazil were locked in a stalemate for many of those hours because the U.S. government perceived that its negotiating position at the UNFCCC was being compromised by a reference to the UNFCCC principle of “common but differentiated responsibility” (CBDR). This famous CBDR principle is enshrined in the UNFCCC convention which entered into force 18 years ago in 1994. It is the principle which acknowledges “equity” and asks developed countries to “take the lead in combating climate change and the adverse effects thereof.” In the current context, the U.S. sees CBDR as a threat to the new treaty they want at the UNFCCC which would put developing and developed countries on the same footing. At the same time, they do not want the CFS to put more responsibility on developed countries for addressing adaptation needs of developing countries.

The U.S. claimed that CBDR is no longer an accepted position, while Brazil upheld the UNFCCC convention which is international law. Canada supported the U.S. position, while Argentina, India, Philippines and China supported Brazil. Civil society organizations including IATP pushed hard for the CFS to assert its primacy and leadership regarding actions needed to ensure food security in the face of climate change and to provide guidance to the climate talks and other fora on this issue. And this was achieved after protracted negotiations between Brazil and the U.S. that ended up side-stepping the CBDR issue by removing all references to it and any “principles” of the UNFCCC. We also succeeded in ensuring that the major and misguided propaganda of the World Bank on “climate smart” agriculture and carbon offset schemes that include soil carbon sequestration did not find its way in the CFS decision box.

This is the first time governments party to the climate talks and the CFS are acknowledging their responsibility to “integrate climate change concerns in food security policies and programs and to increase resilience of vulnerable groups and food systems to climate change, emphasizing adaptation to climate change as a major concern.” They are acknowledging that they must act on the adaptation concerns of food producers, “especially small-scale producers.” Considering that the agriculture talks at the UNFCCC have thus far been busy shifting the burden of greenhouse gas reductions onto small producers who have least contributed to climate change, this step by the CFS is definitely in the right direction.

We, CSOs and governments alike, must now build on this success and ensure that the CFS continues to assert its competence in the realm of food security and climate change—not least because it is the most inclusive and transparent forum to date on both of these issues. We hope this first step is followed by others to push international fora such as the UNFCCC and intergovernmental organizations such as the World Bank and the FAO towards “convergence” that ensures the right to food in all climate change proposals, and particularly in those that address agriculture.