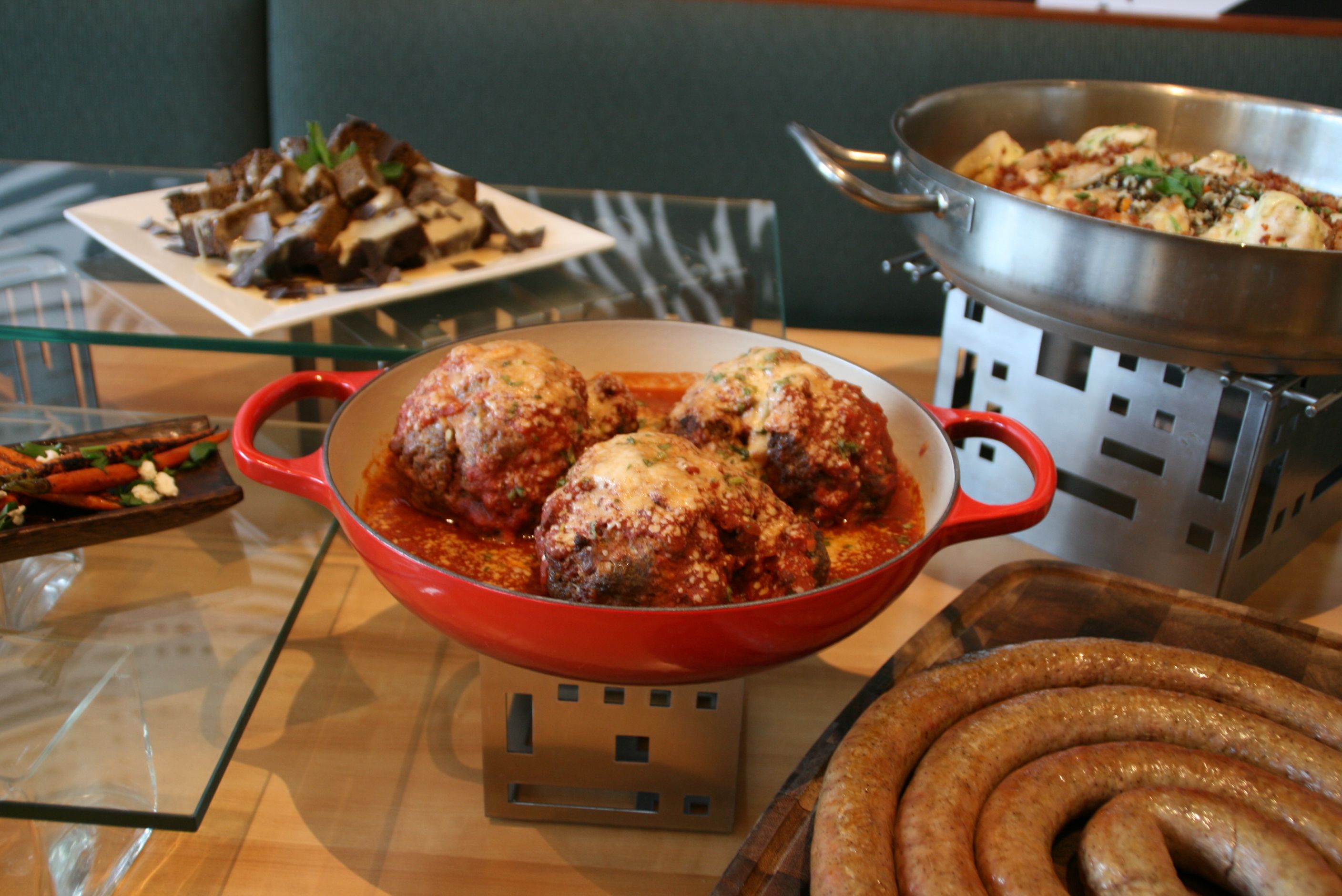 I got the Call of the Wild late last month. The Minnesota Wild invited journalists and local VIPs to the “See the Big Picture” event, to show off new digital renovations at the Xcel Energy Center. Of course, when new fancy technology isn’t enough to bring in the curious, just add free food and drink and a connection to St. Paul city pride.

For the Wild staff and for a lot of politicians and city boosters, the highlight of the day was the first demonstration of a glitzy, high tech and mostly Minnesota-made high def LED scoreboard. You could even selfie yourself on the big screen.

Of course, I was there for the food. There’s a new menu with a lot of whiskey based dishes thanks to the Wild’s new business partnership with Jack Daniel’s. While journalists – mostly broadcast sports reporters – interviewed the chefs and members of the Wild’s PR staff, the VIPs crowded around the bar to sample the Jack Daniel’s Minnesota Wild cocktails, and have some fun.

The new club restaurant has been renamed ‘Old No. 7 Club.’ It’s just one of a number of other ‘Old No. 7’ clubs at arenas around the country that are named after Jack Daniel’s original whiskey, and each with it’s own special chef-driven menu.

There have been a lot of culinary changes since last year when the arena hired Chef Jason Steidle to draw food fans along with sports fans with walleye BLTs, a pork torta, and what he described as a Germanic nachos. But those are gone now, replaced by an entirely new menu.

“We’ve been working on the new menu since the last season ended in June,” said Steidle. “We start writing down ideas and then tried them. If we love it, we hope the fans will, too.”

My favorite was the not-too-sweet whiskey cake served with a buttery whiskey sauce. There are crunchy whiskey glazed carrots, too. Or you can order comfort food, like a 15-hour smoked brisket, mac and cheese, smoked turkey, and dry-rubbed pork butt with your choice of three BBQ sauces. And of course, there’s walleye – a seared fillet with hollandaise, bacon and tomato. “ It’s a little sweet and a little sour, so it hit hits all over your tongue,” said Senior Sous Chef Mike Rewak.

“I think the meatball sandwich will be a hit,” he said. “They’re made with ground beef, ground pork, bread crumbs, oregano, eggs and basil with a marinara sauce. We think the pizza on lavash cracker will be a favorite, too.”

At the general concession stands, hungry hockey fans can find three kinds of tacos – BBQ Pork, fried fish and a ground beef taco melt. There are new sandwiches too, including one featuring the afore mentioned meatballs, a spicy Italian rope sausage sandwich and of course, walleye.

Jack Daniel’s sent two representatives – Donald Friedrick and Emily Nelson – who brought s selection of about a dozen of their whiskeys for tasting. The company has been expanding rapidly, partnering with other sports organizations (the Texas Rangers, Major League Soccer, Professional Bull Riders, Singapore’s Indoor Stadium) as well as music and arts events. They’re also seeking a special commemorative stamp from the U.S. Post Office (which, ironically, will not allow sending liquor through the mail,) for the company’s 150th anniversary.

I tried a thimble-sized sip of the 90 proof Sinatra Select which sells for up to $200 a bottle in some stores. American whiskeys are the new hipster drink, I’ve been told.

ESPN The Magazine had ranked Xcel Energy Center as the best fan experience in the NHL and fourth best in all of professional sports. St. Paul Mayor Chris Coleman, who helped bring the fancy upgrades to the arena, said he believes that the renovations (new arena seats will be installed next year) will “bring in even more major events continuing the vitality and growth of this city.”

So will food bring the people to St. Paul? Will a winning team? Who knows? The season is just beginning but the crowds are already coming. Here, have a whiskey and a good meal and, maybe, watch some guys skate around on ice. It’s how they do it in St. Paul.