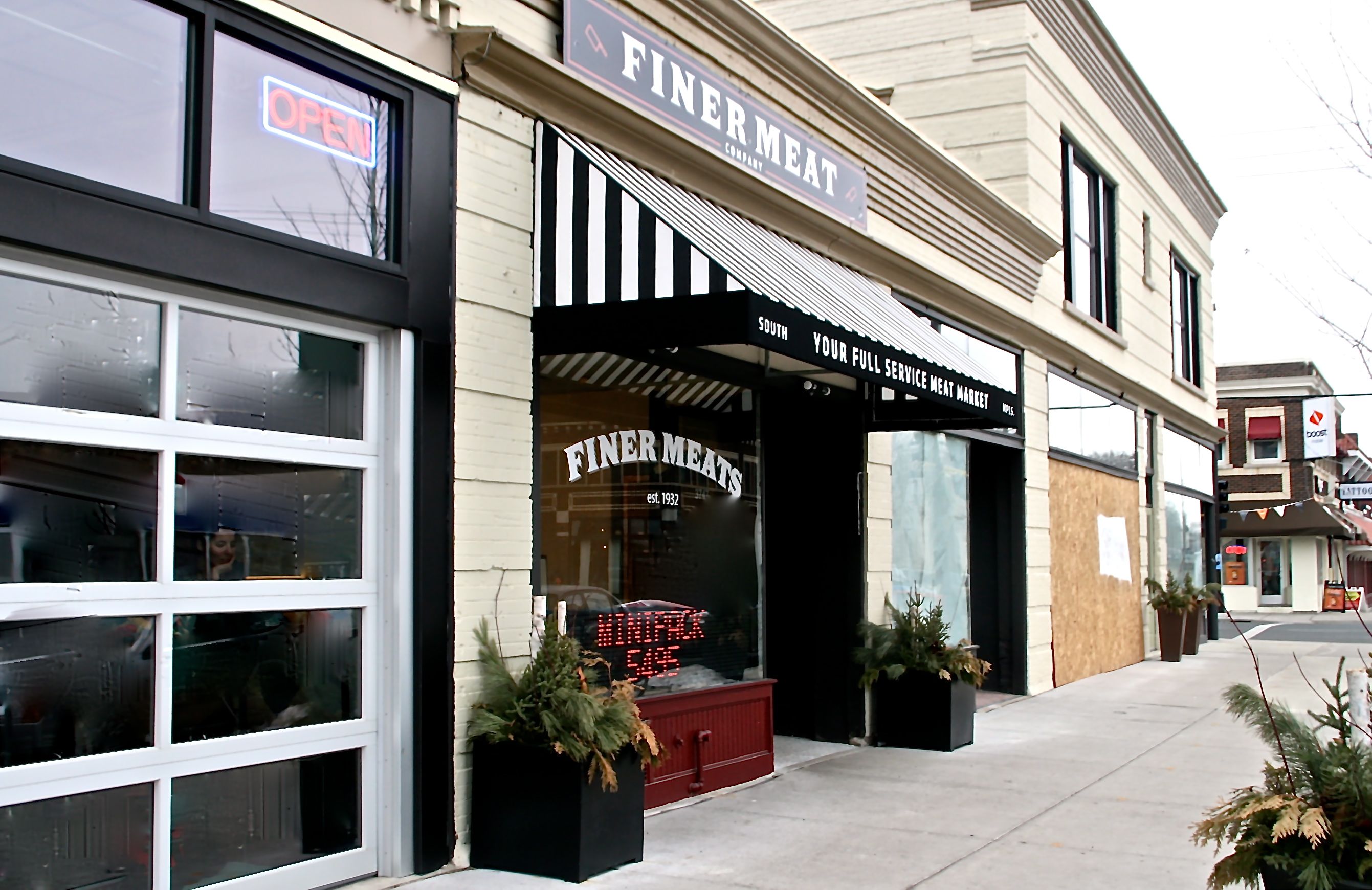 The Finer Meat Company, the tiny butcher shop near the corner of Nicollet and 38th, has been providing the best in meat to South Minneapolis since the depth of the Great Depression. First opened in 1932 at 36th and Bryant (now Gigi’s,) the shop moved to its current location and was then sold to Aaron Knopik in 1963. It hasn’t changed very much since then.

Many customers have been coming to Finer Meats for years, even before a very young Brian Knopik stood on a milk crate helping stock the shelves for the family business. “My grandfather bought it on Saturday and opened it again on Monday,” said Knopik, who now runs the place. Knopik works with his fiancé, Stacy Tollefson who met Knopik five years ago and signed on as a rookie butcher the same night.

The shop’s customer demographic is mostly the same as it was 50 years ago – African-American soul food cooks from the local neighborhood. They still come to buy fixings and exchange recipes. But recently, a new customer base is discovering Finer Meats.

Last year, the store received its first upgrade in years. There’s a new logo on the door and an up-to-the-minute look to the outside. The curb appeal helps to attract the hip cats from Five Watt coffee next door and the trendy restaurants sharing the same block. (Restaurant Nighthawks will soon open where the fondly remembered Shorty & Wags Original Chicken Wings used to be.)

Walk in, though and you’ll find the place decidedly old school. The floor is linoleum and the fluorescent lights are industrial. The tape machine for wrapping the meat in white butcher paper is from 1932, from the old location. But, that just speaks to the store’s authenticity. This is a non-apologetic butcher shop.

Unlike most supermarket butcher shops, you can order meat cut the way you want. Choose the thickness of your steak, ask one of the butchers to cut up a duck for duck etoufee, or bring in your own fish for a stint in the smoker. “Most places get their meat pre-cut, in boxes. They don’t have to equipment to cut meat. We can cut to order,” Knopik said, as he put turkey through the store’s the large electric saw.

Knopik recently invested in an all-digital scale and the smokehouse in the back got an upgrade four years ago, after a fire. “It happened on my birthday and we were home celebrating,” said Tollefson. “By the time we got back here, the fire fighters had it mostly out, but the back room had already collapsed. We spent $50,000 on a new smoke house. It’s all computerized. You can control it from your cell phone.”

“The hipsters are buying houses in the neighborhood and coming in to shop. They buy some of the same things as our mainstay customers, but they go on the Internet and find new recipes. They’re looking for hickory smoked pork belly or they’re part of the new bacon scene. They’re looking for things that most grocery stores don’t carry. They come here and buy our beef sticks to eat as they drink coffee at Five Watt next door. ” And, he said, the old customers are still faithful.

Curtis Lee, who lives in Southwest Minneapolis, is one of those old customers. He came to buy some of the smoked chicken, smoked pork and some of the store’s cut-to-order oxtails. “I boil the oxtails with onions until they’re fall off the bone,” he said.

Knopik make a lot of what he sells from scratch, many recipes handed down from his grandfather. He makes breakfast sausages, your choice of pork or beef and Finer Meat’s own recipe hot dogs, Polish and in the summer, brats. They sell a variety of jerky flavors and fresh meat and poultry as well. “I’ve added hot jerky,” said Knopik. “My grandfather didn’t like hot.”

The lamb bacon was inspired by Sami Wadi, chef at Saffron, who told Brian’s father, “You have to come up with a lamb bacon. If you can’t do it, no one can.”

You can get fish – catfish, buffalo, perch, tilapia and walleye. There’s lamb at a reasonable price and thick cut lamb steaks. And they’ve just begun to carry organic cheese for their hipster customers.

The store is doing well, selling up to 3,500 lb. of meat, poultry and fish every week. Every Tuesday, the staff puts together an order for cold cuts, enough for 500 sandwiches for the Basilica of St. Mary’s sandwich program, free to all who are hungry.

The Finer Meat Company is located at 3747 Nicollet Ave. S. in Minneapolis. They’re open until 6:00 pm and are closed Sunday and Monday.

The Finer Meat Company has been in the same family since 1963 as the neighborhood has changed around them(Credit: Stephanie Fox)