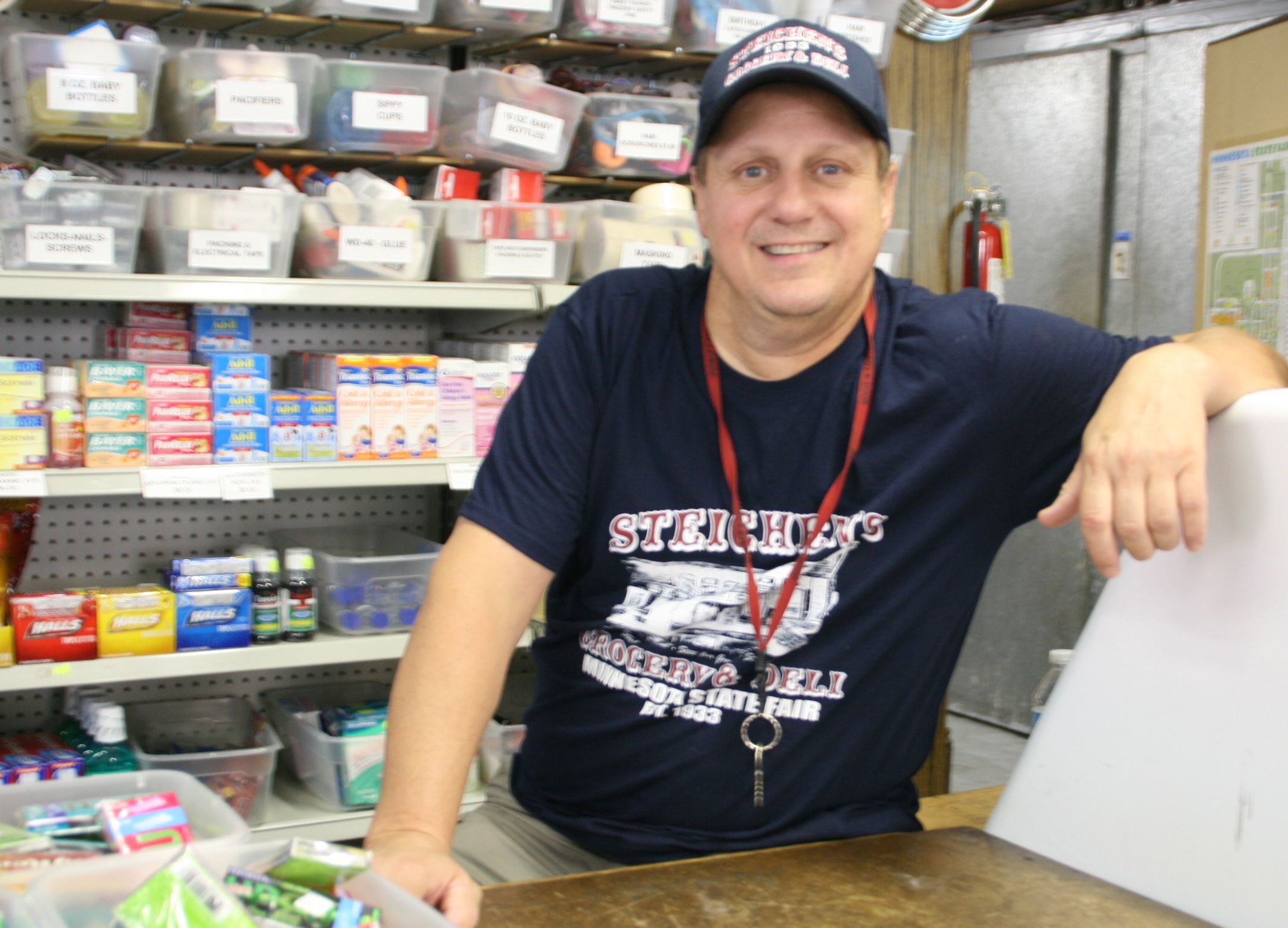 If you’re looking for something on a stick, Steichen’s Market and Deli at the Minnesota State Fair is not for you. The store’s motto is “Cease the grease. Nothing on a stick since 1933.” But for anyone looking for diapers or allergy medicine, this market might be your best friend.

Those who actually stay full-time at the Great Minnesota Get Together – people who run the Midway rides or operate a food booth or who brought a four legged 4-H project to show – already know about Steichen’s Market and Deli. It’s the only place to go when you need cleaning supplies, diapers, cereal, aspirin, antihistamine, shampoo, deodorant, bandages, sunscreen, canned tuna, and even dental floss.

But, even if you don’t work at the fair, if you’re one of the nearly two million people who attend only as a visitor, you’ve probably seen the signs for the store. You may have thought the place was off limits to sightseers. It’s not. Everyone is welcome at Steichen’s.

For three generations, since the store opened in 1933, the Steichen family has been operating Steichen’s little convenience store and deli in what legend says was an old bi-plane hanger. That was the same year when the big event at the Fair was the collision of two locomotives at the Grandstand. It was the same year the steel arch, now re-installed at the new transit station, was first erected. It was the height of the Great Depression, the same year Prohibition ended. It was a long time ago. 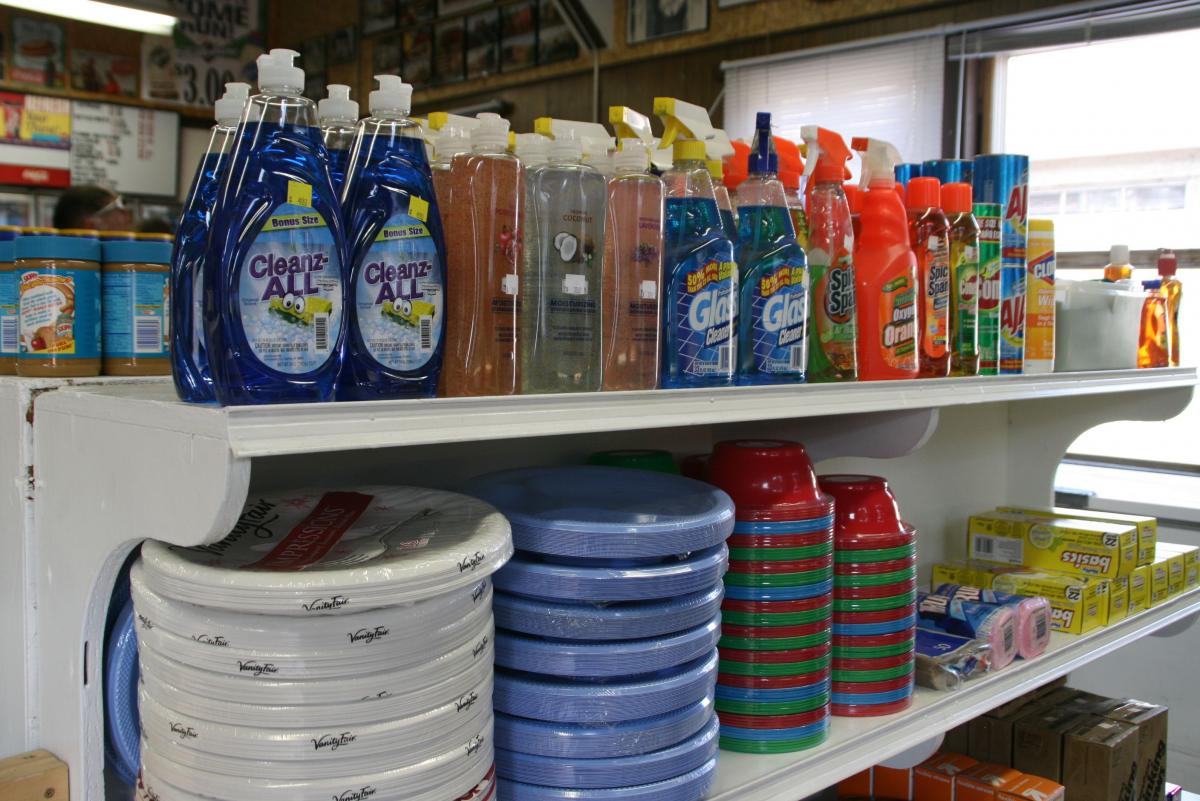 The store is open fewer than two weeks each year, during the State Fair at the end of summer and for three days in June, for the Back to the ‘50s Minnesota Car Show. Owner Jimmy Steichen, arrives as early as March, to begin maintenance, repairs, and to order and stock products.

Steichen has worked at what was his grandfather’s store for 44 years, beginning when he was eight years old, assigned to pull gizzards out of chickens. His father, Ted Jr., took over from his grandfather and when he retired, he passed the crown on to Jimmy.

Steichen said he has no idea how new visitors find the store, but more and more find it every day.

While most customers are fair workers, people like Bob LaBore from Woodbury said he saw a sign for the store and came in to check the place out. “Now I can say I’ve been everywhere at the Fair,” he said.

Steichen said he loves meeting new customers but he especially loves seeing old friends. “I have a lot of friends who work the carnival,” he said. “Some have been coming for years.”

Hunter Bowlin begins his first year of college at Stout in a few days and said he’s been working at the store since he was seven years old and comes in to help Steichen.

But the biggest seller are the deli sandwiches, he said, which are freshly made and cut right there in the store.

“We have the carnies and the French fry people as regulars,” Bowlin said. “They come in every day and it gets so I know what sandwich they want before they order it.”

At first, cashier Lisa Eckma is too busy with customers to answer questions. She’s fast, efficient and calls everyone ‘Hon.’ “What do you need, Hon?” “Here’s your change Hon.” She knows the price of every product and smiles constantly. When not at the fair, she works as a massage therapist.

“The Market is a great thing, tucked behind here,” Eckma said. “I love working here. I like all the people. I like the regulars from the Midway. They come every year and they’re loyal.”

Despite being one of the oldest establishments at the fair, Eckma said, they don’t get much promotion or press. “The new ones get all the press coverage,” she said. “People don’t even know that we’re in the coupon book.”

Steichen’s is open from 7 a.m. until after the Grandstand and fireworks shows every night. It’s located at 1778 Commissary Loop, north of the Coliseum, in the alley shortcut between the Horse barn and the DNR, behind the Poultry Building. Look for the signs pointing down the alley and the sign on above the door, ‘Established 1933. Celebrating over 80 year, Minnesota State Fair.’