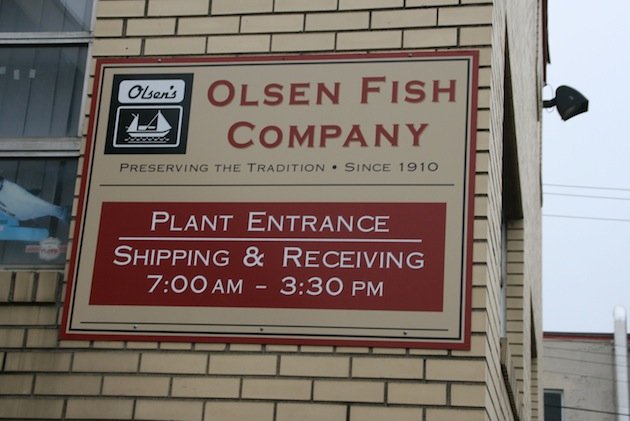 It’s Christmas, the season of lutefisk. For thousands of Minnesotans of Scandinavian ancestry, eating lutefisk – at least a bite of two – is a tradition, perhaps even an obligation. But without Chris Dorff and the 104-year old Olsen Fish Company, scores of Yuletide lutefisk dinners and thousands of families might have to do without their yearly ritual.

This article is first in a two-part series. Read part two, Duluth Lutherans miss out on 550 pounds of lutefisk.

December is the heart of the busy season at Olsen’s, during which company President Chris Dorff and his employees produce up to 500,000 pounds of lutefisk for the holidays. “My father always said we were the largest supplier of lutefisk in the world,” said Dorff. “I’m a little uncomfortable about that. Just say we’re the largest in the Western Hemisphere.”

The recipe for the fish was handed down from the Vikings. High-grade ling cod fillets are line-caught off the seas of Norway during the spring spawning season. The fillets, many up to three feet long, are arranged on wooden racks to dry in the constant Nordic sea breezes when, said Dorff, “It’s not too cold and not too hot and the sun is shining for nearly 24 hours a day.” From there, the now rock-hard dried planks of cod are sent to the Olsen Fish Company in North Minneapolis, ready to become lutefisk.

Beginning in September and working through May, 18 year-round veteran lutefisk makers and a seasonal production crew begin to turn the hard boards of fish into a holiday delicacy.

“The first step is to reconstitute the dried fish in repeated washes in fresh water over two weeks, then in a cold water and sodium hydroxide (lye) solution for a couple more days,” said Dorff. (Point of information; Food grade lye is also used to process green olives, hominy, masa harina for cornbread and tortillas, soft German pretzels, corn nuts, yellow colored Chinese noodles and some cocoas and chocolates, to name just a few.)

“After we drain them, we add fresh water to take down the ph level, then hand pack them. Some fillets get done earlier and some later. You have to pay attention to keep up the quality,” he said.

Dorff thinks that some of lutefisk’s bad reputation probably started when it was processed in home kitchens. “It goes back to when our grandparents soaked it themselves. There was the smell when they hung the fish out to dry. There wasn’t a lot of quality control. Now, it’s a refined process. We can control the air temperature and humidity.”

The core market for lutefisk is the five-state area, but Olsen will ship to Canada, Washington state, California and “all the snowbirds down in Arizona and Florida,” Dorff said. “It’s funny. We do a lot of business with the Hy-Vee in Iowa. Everyone in the northern third of Iowa knows about lutefisk, but south of there, they’ve never heard of it.”

Dorff admits that the popularity of lutefisk is falling. “Sales drop every year. It used to be, at a family get-together, they’d order 25 or 30 pounds. Now, it’s three to five pounds. People say they don’t like it, but that’s probably because what they’ve eaten wasn’t cooked right. People in the Midwest like to overcook their fish, but when you overcook lutefisk, it gets mushy. When it’s cooked right, I’ve had people say that it tastes like lobster.”

Char Juntunen, a Lutheran lutefisk expert, runs an annual lutefisk fundraiser in Duluth. She has a more succinct description of how to tell when lutefisk is cooked right: “The hard part is you have to watch it. After about 10 minutes, I stick my fork in the pieces and if it feels like it’s going to flake, it’s done. If it looks like snot, don’t eat it.”

While Dorff’s lutefisk sales are declining, his pickled herring sales are rising. “Herring sales grow every year,” he said. “Our biggest growth in on the East Coast, with the kosher-keeping population. We sell two million pounds of kosher herring every year. It’s loaded with omega 3s. It’s better than fish pills. Only two ounces of pickled herring has 500 mg of omega threes.”

Dorff insists on high quality control in his herring processing. “We give it an extra rinse and an extra brining process. We put the labels on by hand. When our bottles leave here, we want them to look clean.”

No glamour, but a living wage

The Olsen Fish Co. doesn’t have a lot of employee turnover. “This is a union shop, Teamsters Local 698. We have one employee who has been here 30 years, another 20 years and another for 18 years,” said Dorff. “Everyone deserves a living wage, health and dental insurance.”

Processing fish is not glamorous. It’s chilly on the factory floor and even in the offices far from the processing area, the smell of lutefisk and herring permeate everything.

During the busy season, Dorff puts in 60 hours a week, spending at least two hours a day on the floor of the factory. “When I leave here, my clothes go in the garbage,” he joked.

After leaving Olsen’s, I stopped by a quick stop for a tank of gasoline. As I paid my bill, the woman behind the cash register said, “I thought our fish salesman was here, but it’s you. You sure do smell like fish.” I’d been on the factory floor less than an hour.

Chris Dorff holds a plank of dried ling cod before it begins the process that turns it into lutefisk. (Photos by Stephanie Fox)

Cod fillets after a several-day soaking in fresh water. (Photos by Stephanie Fox)

Each barrel of pickled herring holds 225 lbs. of the fish. (Photos by Stephanie Fox)

It takes a sharp knife to cut up a lutefisk fillet. (Photos by Stephanie Fox)

Lutefisk fillets are ready to be cut into pieces, packed and shipped. (Photos by Stephanie Fox)