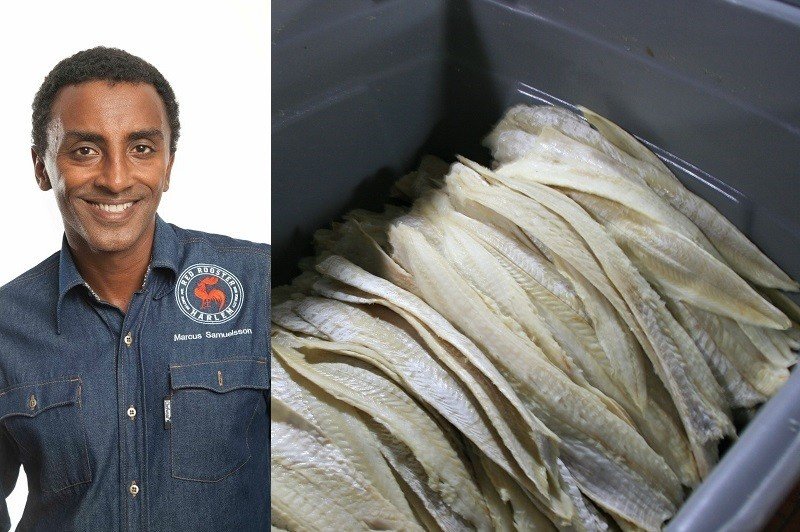 (Photo by Stephanie Fox) Left; photo of Marcus Samuelsson courtesy of himself. Right; lutefisk in all its glory.

The obligatory bite of lutefisk at a Winter Solstice/Christmas celebration is one of two yearly traditions for thousands of Scandinavian Americans. The other is to complain about having to eat it. Fish jello. Stinky. Slimy. It’s the same thing every year. People hate their lutefisk. But that’s like saying you hate vegetables when all you’ve had is heated-up canned spinach.

Properly prepared, I was convinced lutefisk could be good. To prove it, I tracked down two internationally known lutefisk experts – chef Marcus Samuelsson and Minnesota’s own Char Juntunen, the woman in charge of one of the bigger lutefisk dinners served anywhere. The two approach lutefisk very differently.

Samuelsson is an internationally known chef, restaurateur and media star. Born in Ethiopia, adopted by a Swedish family, Samuelsson grew up in Göteborg, learning to cook Scandinavian food at the knee of his grandmother, professional chef Helga Jonsson. He founded a number of restaurants including Aquavit in Minneapolis in 1999, now regrettably closed.

His latest cookbook, “Marcus Off Duty: The Recipes I Cook at Home,” does not contain a recipe for lutefisk. So, I called him to get one.

“Lutefisk is from a generation you don’t see anymore, from a time we had to preserve things,” Samuelsson said. “It’s part of the heritage. If you see it, you’ll see it around Christmas. The textural component to lutefisk in Scandinavian was poor because you had to over cure the fish. It was the only way to keep it from going bad.”

“We are now doing things to change that tradition,” he said. “When we serve it now, we serve cod fresh, in a white mustard sauce. You change up because the products are better,” he said.

While lutefisk may no longer be part of the holiday feast in Scandinavia, another traditional food remains popular. “Pickled herring didn’t go away,” Samuelsson said. “There are at least five herrings on every Scandinavian Christmas table.”

Samuelsson pickles his own herring and gave me a quick and basic recipe – “You make a pickling solution, called a 1•2•3 solution, made with sugar, water and ättika (a 24-percent acetic vinegar from Sweden, available at Ingerbretsen’s for $6.99 a quart.) Bring it to a boil, cool it completely and add salted herring.” (Remember to soak the herring first to remove the excess salt.) Recipes can contain carrots, onions, herbs and spices, depending on they type of pickled herring you want to make.

Samuelsson was also happy to share his recipe for traditional lutefisk but says he does not plan to eat any of the fish this year. (See recipe below.)

Char Juntunen is in charge of the kitchen at First Lutheran Church of Duluth’s annual lutefisk feed and fundraiser, an event raising $10,000 for the church’s charities. The day before the feast, a dedicated truck from the Olson Fish Company in north Minneapolis, one of the world’s largest lutefisk and herring plants, arrives with 500+ lb. of lutefisk for Juntunen and her crew of volunteers. This season’s event brought in more than 900 people from three states. (That’s a half-pound of fish per person.)

While Samuelsson poaches his fish and serves it with a mustard cream sauce, Juntunen prefers to bake hers. Juntunen said that the worst mistake people make with lutefisk is overcooking. “You have to watch it,” she said in an interview last lutefisk season. “After about 10 minutes, I stick my fork in the pieces and if it feels like it’s going to flake, it’s done. If it looks like snot, don’t eat it.”

Do you want to try these yourself? Neither recipe is difficult, but, as Char Juntunen insists, check the fish frequently so you don’t end up with stinky, slimy fish jello. I tried both recipes and liked them. Remember to soak the lutefisk for an hour or more before cooking, changing the water a couple of times.

Bring the liquid to a boil, lower the heat and add the 1 lb. soaked lutefisk cut into individual servings. Simmer on low for 15 to 20 minutes, checking often to make sure the fish is not overcooked. The fish should be slightly flakey. Don’t worry if the milk solids separate in the cooking liquid.

For the mustard gravy:

In a saucepan, mix together 1-tablespoon grain mustard, 1-cup heavy cream and ½ cup whole milk. On low heat, bring the mixture to a near-boil, whisking continually. Do not let it come to a hard boil. When there are slight bubbles, sprinkle in 1-teaspoon quick-mixing all-purpose flour a little at a time. Continue to whisk. The sauce will thicken. If it becomes too thick, thin with a little milk. Plate the fish, serve covered with the mustard gravy and sprinkled with chopped fresh dill. Serve with boiled potatoes.

Preheat the oven to 400º. Spray a cookie sheet (with sides, to hold any liquid that comes from the fish) with PAM or lightly grease it. Lay the pieces of soaked lutefisk in the pan and brush with butter. Sprinkle with Lawry’s Seasoned Salt or other herb mixture. Put the pan in the oven. Check the fish for doneness after about 10 minutes. Test with a fork and if the pieces are beginning to flake, the fish is done. Pour melted butter over the lutefisk.  Serve with boiled potatoes.