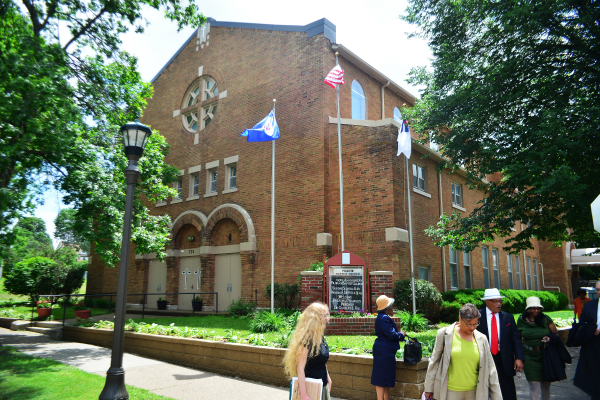 Sesquicentennial is a difficult word to say, but likely even more difficult for the founders of the Pilgrim Baptist Church to imagine back in 1863.  That’s when a group of slaves escaped from Boone County, Missouri, and headed North, traveling in the middle of the Civil War, from the heart of an area often called Little Dixie. What faced the fleeing slaves was complete uncertainty. They could not be sure of where they would end up, or what sort of welcome they might receive. In the face of this uncertainty, they called themselves pilgrims, searching for a new land.

On June 22-23, the spiritual descendants of those pilgrims celebrated 150 years as a congregation in Pilgrim Baptist Church in St. Paul.

Among the pilgrims who found a home in St. Paul in 1863 was Reverend Robert Hickman. He had preached to the slaves in Missouri, and wished to continue now that they had found their freedom. The pilgrims continued to move from holding services in the houses of members of the congregation, to a room in the Concert Hall Building, to an annex that was under construction in the First Baptist Church. Eventually they found their own church on Sibley Avenue.

Pilgrim Baptist Church wears its history on its walls. On the left side of the altar a stained glass window of Reverend Hickman looks down on the service, along with other figures important to the history of the church and the Reverend Martin Luther King, Junior.

As the oldest black church in Minnesota, Pilgrim Baptist Church has taken its role in the African-American community seriously. From its foundation the church has taken on the issues of civil rights and education in the African-American community, including participation in the civil rights movement and the founding of one of the first black newspapers in the state.

Despite its age, Pilgrim Baptist Church is full of energy. On Sunday June 23rd, the sesquicentennial event seemed to erupt and flow with the energy of people joyously saying, “We have been here for 150 years and we plan to being around for a long, long time more.”

As we drove into the parking lot, several members welcomed us. As a retired pastor, I was glad to see the people taking the initiative to extend the welcome to our family. Many times throughout the day we were greeted warmly and made to feel as if this was a place we could find our rest. A nice touch was during the official welcome, visitors were not singled out or asked to introduce themselves.

When the praise time began, waving arms, a swaying choir and a liturgical dance team invited us to soak in the spirit and join in with the congregation. After a few songs, the church youth came out, smartly dressed in white shirts, black pants and wearing the mime’s mask. The youth spoke to us in movement and dance as they shared their message of praise and faith.

Next in the service came a recognition of 50 year members, a presentation of church history and a gift from First Baptist Church of St Paul, which was a book detailing the early history of Pilgrim and their shared connections.

Soon came the scripture, which was 1 Peter 5. 5-11. The message, happily shared by visiting Pastor Dr. George Waddles, President of the NBC Congress of Christian Education, centered on the scripture theme of  “Give Grace to the Humble.”

Dr. Waddles connected the message to the history of Pilgrim Baptist Church, saying that in being a slave for Christ, we become the servant-leader. He made a point using humor about how as a kid he lived in a tough neighborhood and would be chased home by gangs of kids wanting to give him a beating. He said, “You don’t look too manly when you are running as fast as you can yelling ‘Mama, Mama!’” Dr. Waddles said that he usually made it to his front yard, where his mama came out…all 350 pounds of her, and she would stare down those boys chasing him, and call out their names, since she knew them all. As they slunk away, Dr Waddles said he would poke his face around her skirt and stick out his tongue at them.

His point: he had sought the protection of his mom…and when you submit yourself to Jesus, you are safe. The pilgrims who founded Pilgrim Church submitted themselves to God because they were on a perilous journey and they only way to safety was in the hands of the Lord.

After the message was given, as in many churches, the ladies went down to prepare the food for the hungry members who had been spiritually nourished but were now physically famished. A nice reception was put on for members and guests.