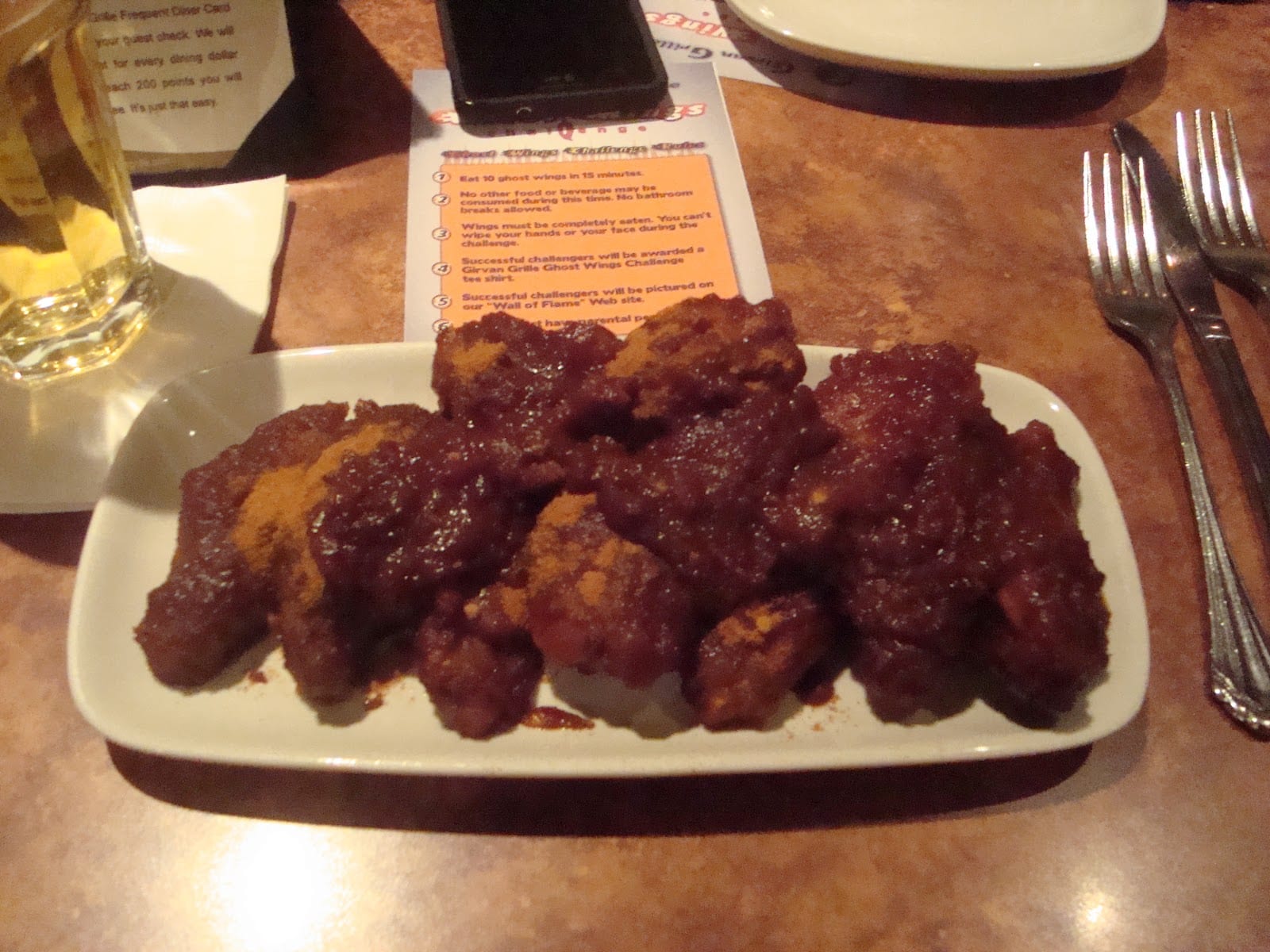 Eating ghost peppers can be a new and exciting experience, but it is not for everyone. For example, it is not for sane people. But up until Saturday night, I’ve never had a hot pepper I didn’t like, or a hot pepper I couldn’t eventually handle. I’ve been the Will Rogers and Rocky Balboa of peppers and spices. That is, until I tried the ghost pepper challenge at Girvan’s Grille. Here’s how it works: if you eat ten ghost pepper chicken wings in 15 minutes or less, without eating or drinking anything, or wiping your face or hands, you get a commemorative t-shirt and your name immortalized on their website. The last time I ate ghost pepper wings (at a different place), I finished a dozen in eight minutes. And the time before that, I actually sent them back to the kitchen because they weren’t hot enough. So this challenge should have been easy. Boy, was I wrong.

First off, they do make you sign a waiver. I’ve never had that happen before, and that should have been a warning. But the other ghost pepper chicken wings I’ve eaten come with a buffalo-style glaze and little flecks of pepper on them. Here, the wings are covered in a thick ghost pepper goo, with concentrated ghost pepper extract powder on top. You almost can’t tell there are chicken wings under the pile of insane spiciness. 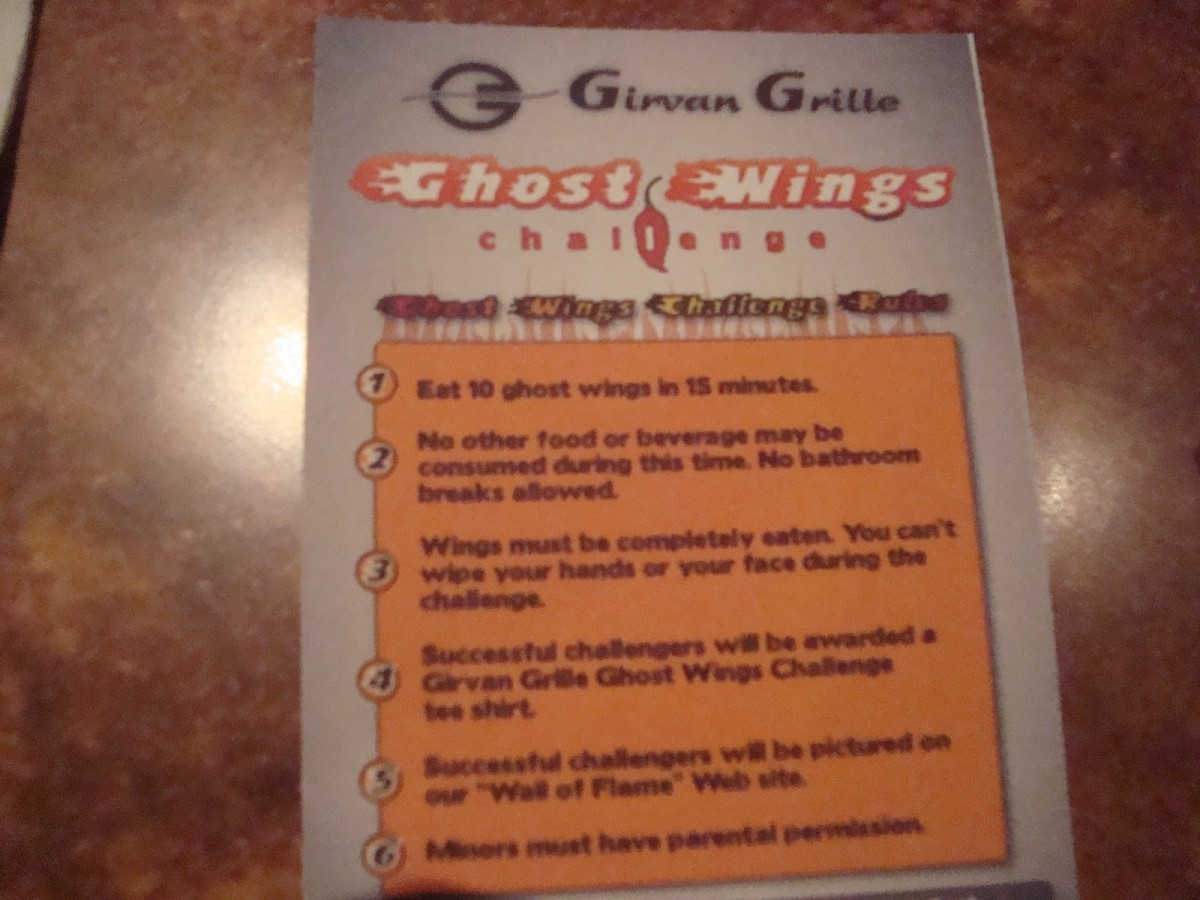 My companions and I each had our own equally meaningless strategies for how we were going to approach this. Mine was “slow and steady wins the race. Don’t eat the wings too quickly or the spice will build up too fast and overtake you.” Another strategy was to finish the wings as fast as possible before realizing how hot they truly were. The third approach was, “I’m probably just going to wind up crying like a little girl.” It turns out that was the only plan that was remotely true to what followed.

The plates came out, the timer started, and a waitress agreed to film our exploits for posterity. We each took our first bite, and all three of us immediately started hiccuping. I’ve never had that quick of a reaction to a pepper. I made it through the first wing, grabbed the second and took that apart. My mouth started to feel like I had taken a bite of concentrated tear gas, and I said, “You know guys, I don’t think I’m going to make it.” I finished the third wing by the time two and a half minutes transpired. In terms of time, I was well on my way. I decided to pause for just a moment to catch my breath.

One friend was muttering about how insane this was, and the other said he couldn’t feel his hands. He wasn’t crying like a little girl yet, but he was shocked that his fingers were going numb. We had consumed eight wings between the three of us, and less than four minutes in we realized we were done for. After collectively throwing in the towel, we downed a pint of milk each, and were still reeling.

“The spice is in my EARS! I can feel it in my ear canals. Seriously, what the hell?”

“My fingers are numb. I mean I just can’t feel anything.” said the other.

I thought maybe I was going to emerge, if not victorious, then at least unscathed. This was my second mistake of the evening. I had been preparing myself by eating Hmong and Lao food such as laab meat and papaya salad for the past few days. More likely I had just lowered the amount of capsaicin that my body could tolerate at one time.

I felt like I had just swallowed molten lead that was sitting in a ball in my stomach. I ran to the bathroom, not knowing if I was going to vomit. But the stuff was so blazing hot going down, I did NOT want to find out what it would be like on the way back up. I held it in, but then needed to go lay down somewhere. I found an empty booth in the restaurant and holed up for a bit. But this pit of fire wouldn’t let me stretch out fully. I tried curling into a fetal position and that didn’t help either. I grew up on a farm and played high school football, so I employed the “walk it off” technique, but to no avail.

Finally, my body essentially said to me, “Jeff, you are not allowed to keep this much spice inside of you. It’s not going down or coming out, so I guess it will have to leave the body through every pore in your skin.” Later, when I could think coherently, I was reminded of the classic X-Men storyline of Magneto vs. Wolverine. 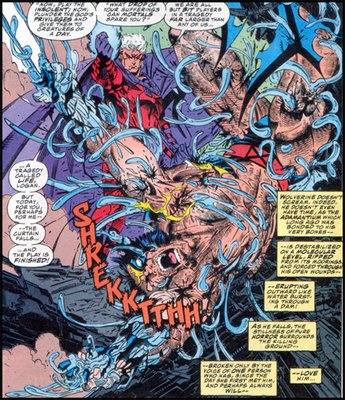 I was sweating everywhere. My face, my arms, my legs, my head and torso, were all drenched. Even my hair was sweating. No, I don’t mean that my hair was sweat-y, I mean that it honestly felt like my actual hair was really emitting its own sweat. I realize this is physically impossible, and I’m telling you the ghost pepper does not care. My hair was sweating. I went to my table and told my buddies the following important development: “Hahhdonfeelswill. Sneverhappened…donowatshppen…thinineedoutsidefshair.”

At least that’s what I was able to articulate. In my mind I had carefully informed them: “I don’t feel so well. This has never happened before, I…I don’t know what’s happening. I think I need to go outside for some fresh air.”

On my way outside, I passed a guy who was getting his photo taken with the commemorative t-shirt. I found a cozy place on the grass that wasn’t covered in dirty snow, and laid down for a few minutes as the cool air finally gave me some relief. Mr. T-shirt-winning ghost pepper challenge guy didn’t even make it to the car before I heard a rather distinct sound that could only be described as “an extended hornk.” Who’s smarter now, huh? The guy who ate ten wings and “hornked,” the guy laying on the ground who ate three and stopped, or the dude who only had two wings before crying like a little girl?

I know what you’re thinking, and you’re probably right. The smartest person is the one who didn’t try this challenge in the first place.