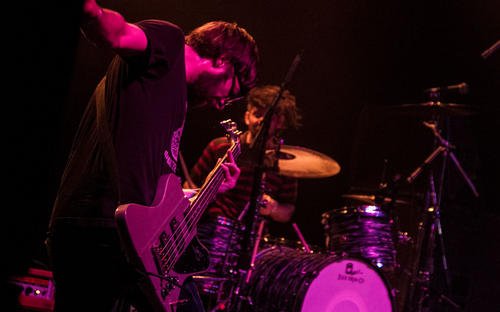 Freelance writers Sally Hedberg and Dana Raidt started Girl Germs after “Stevie Nicks came to them in a dream.” The message delivered by the liminal Nicks was that they should do more to promote the presence and history of women in rock music. Shortly afterwards, they began the website girlgerms.com and organized the First Annual Girl Germs concert at First Ave on Friday May 30, 2014.

The idea for the show was that local artists, not necessarily all women or women-fronted, would pick and pay tribute to notable female artists in rock history. Because of this, the show had a very eclectic selection of musical styles and moods. CRYSTAL, a new band that boasts two members of noise rock masters Brute Heart, kicked things off by playing a few of Sade’s hit songs. Rather than staying too loyal to the original, they broadened the songs just a bit to make it closer to their own style. In general, I enjoyed their approach as they turned Sade’s smooth sexy jams into something just a little bit alien. Their cover of “Smooth Operator “was the highlight of their set and they managed to get some of the early show crowd to stay inside and sing along.

Lydia Liza, of Bomba De Luz, performed Dusty Springfield songs. She’s still in her teens, so it was interesting to hear her interpretation of these classic pieces. Appearing in an evening dress, flanked by a single guitarist, she brought a little bit of torch song to the show. She covered the hit songs well, getting the broad strokes of Dusty’s music but occasionally missing a moment of subtlety here and there. Liza saved the best for last, delivering a soulful version of “You Don’t Have to Love Me” to a very supportive and cheering crowd.

The all-male band Fury Things played next and kicked the tempo up a few notches. They got the growing audience dancing and moving to their slightly de-grunged versions of Hole songs. The MC for the evening was rock matriarch Lori Barbero, and she shared some of her own personal history with Courtney Love prior to their set. This was a fun addition and added a reminder of how close rock history is to the venue it was hosted by. Surprisingly, the best part of their set wasn’t a Hole song, but a cover of “Say My Name” by Destiny’s Child. They made it into a thundering bit of angst with a nuclear guitar meltdown. Nicely done.

Psychobilly all-stars L’Assassins brought their edgy neo-retro rock to the raw indie sounds of Thee Headcoatees. This was a high-energy set, possibly much more energetic then the originals, and singer Tea Ann Simpson worked the stage and crowd like a rock icon. They broke the rules, too, playing “Batteries” by Trashwomen to bring a bit of punk back into the room. By this point, the crowd was filling the Mainroom and appreciated the back-to-back high power sets.

Neo-New Wave duo Strange Names took on the task of bringing the B-52’s to Girl Germs. This was no small task, given the B-52’s unique sound and presentation. Strange Names avoided much of the B-52s theatricality and focused on reworking the classics. At some points they played it too close to the original and as a result sounded a bit too much like a cover band. Their cover of “Deadbeat Club” was inspired, a hit with the crowd and the highlight of their set. They brought a bit of melancholy and dark London out from the classic anthem. Strange Names also had a set of glowing plastic boxes on the stage with them, this added an entertaining touch but I am not enough of a fan to know if it was a reference to something in particular.

Local alt-country space cadets Night Moves covered The Cranberries. I had no idea how this was going to go, but they did a nice job keeping the spirit of the originals while bringing the hits around to their aesthetic. They closed with “Zombies” and that brought the 18+ crowd to a full rocked-out frenzy. Night Moves replaced the burning delicacy of The Cranberries with something raw and frank. It worked.

Pink Mink are something of local super group themselves, and some of the band member’s history goes back far enough to connect with a few of the artists being covered. They selected Bikini Kill, the riot grrls from the great Northwest, for their music. Pink Mink has a big loud sound that is somewhat more expansive than Bikini Kill’s raw indie tone, and it was cool to hear how that difference played out in their cover tunes. Their covers certainly had the original spirit intact, but warped it into something for a larger venue like First Avenue. The evening ended perfectly with a crowd-rousing version of “Rebel Girl” that everyone, including the organizers, could sing along with.

Unless you are a really, really, good cover band, attempting to mimic the original artist is mostly a futile effort. The best part of tribute shows like Girl Germs is the vibe of experimentation, of creativity and celebration. Local bands don’t usually have these songs in their catalog, so they have to be learned quickly and often come out pretty raw. More than a few lyrics were forgotten during the show, but that was all in good fun. Throughout the mini-festival it was clear that the bands loved what they were doing and having as much fun as the crowd. The organizers said they wanted a celebration, and that is exactly what happened.