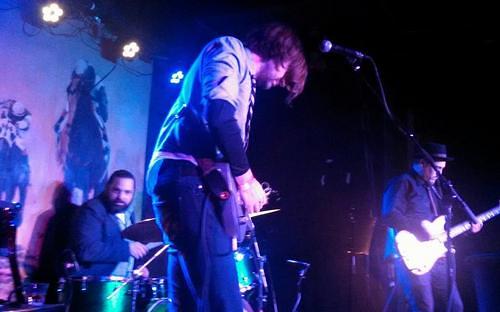 Saturday night the Turf Club welcomed the second infestation of local Girl Germs. Like lots of good ideas, it’s a simple theme – local musicians paying homage to women in rock. That might mean Kitten Forever taking a pop icon like Beyoncé and making it their own. It might mean Aby Wolf striking perfect pitch of Kate Bush. There’s something for everyone, which makes the case that women can’t be pigeon-holed – they can rock any genre, any era, any taste.

Also worth noting – casting for the event is gender-blind. (Which led to the most amazing performance last time around with Night Moves singing the Cranberries. I get goose bumps remembering it!)

This time around Aby Wolf headlined with a spot-on interpretation of Kate Bush. It was impressive! Bush has that falsetto-esque voice that’s so high and warbly and Wolf nailed it. I could have closed my eyes and told you exactly what I was doing the first time I heard Kate Bush sing Babooshka. And you could see the rest of the audience having the same experience – looking kind of wistful and dreaming. The rest of the band played along – supporting the high quality rendering and bringing us all back to our own Kate Bush memories.

Alpha Consumer celebrated Aretha Franklin. They have a musical style that can be all over the map, often hovering around new wave, so I was very curious about this representation. They cheated in the best way; they brought blues and jazz front woman Debbie Duncan in to channel Ms. Franklin. Duncan noted that it was her first time in the Turf Club. And if the only thing that happened Saturday was that a new audience finds her work, well, the night was a success. The musicians on stage seemed to lift each other up while playing the blues. The addition of keyboards and a trombone added to the celebratory feel and showcased the core member drums, bass and guitar. In a strange twist of fate that makes Girl Germs so much fun – Aretha followed Beyoncé, in front of a crowd who for the most part was better acquainted with Beyoncé. In fact the young guy next to me said oh I wish we could hear Beyoncé all night – but Duncan and Alpha Consumer got the crowd to shift gears and RESPECT in short time. (Although ironically they got respect without singing it!)

Kitten Forever made me like Beyoncé. Wow! They took her music and punked it right up. Each song was played in about half the time. I recognized All the Single Ladies. That’s the only song I can name – but if Beyoncé would take a few fast lessons from these women I might learn more names. They are fun to watch and hear. There’s a little musical chairs going on with band members changing roles every other song – very egalitarian.

K.Raydio represented for Erykah Badu. We learned that K.Raydio chose Badu based on a concert in Chicago seen at a crossroads. They connection was clear. She also allowed that group participation was welcome especially since K.Raydio was under the weather. For someone under the weather she can certain hit and hold some notes in ranges up and down the scales!

Saturday night started with Yoni Yum taking on Marianne Faithfull, an example of a band taking the original and making it their own. There were three keyboards of different ilk on the stage. Singer Jessica Buns brought a 80s pop-punk sound to the earlier tunes of Marianne Faithfull and accompanying the 80s punk were sound effects from 80s video games. Once I realized it wasn’t an alarm, it took me back to Rockafella’s (a St Paul video arcade of yesteryear). A fun band I hope to see again soon.