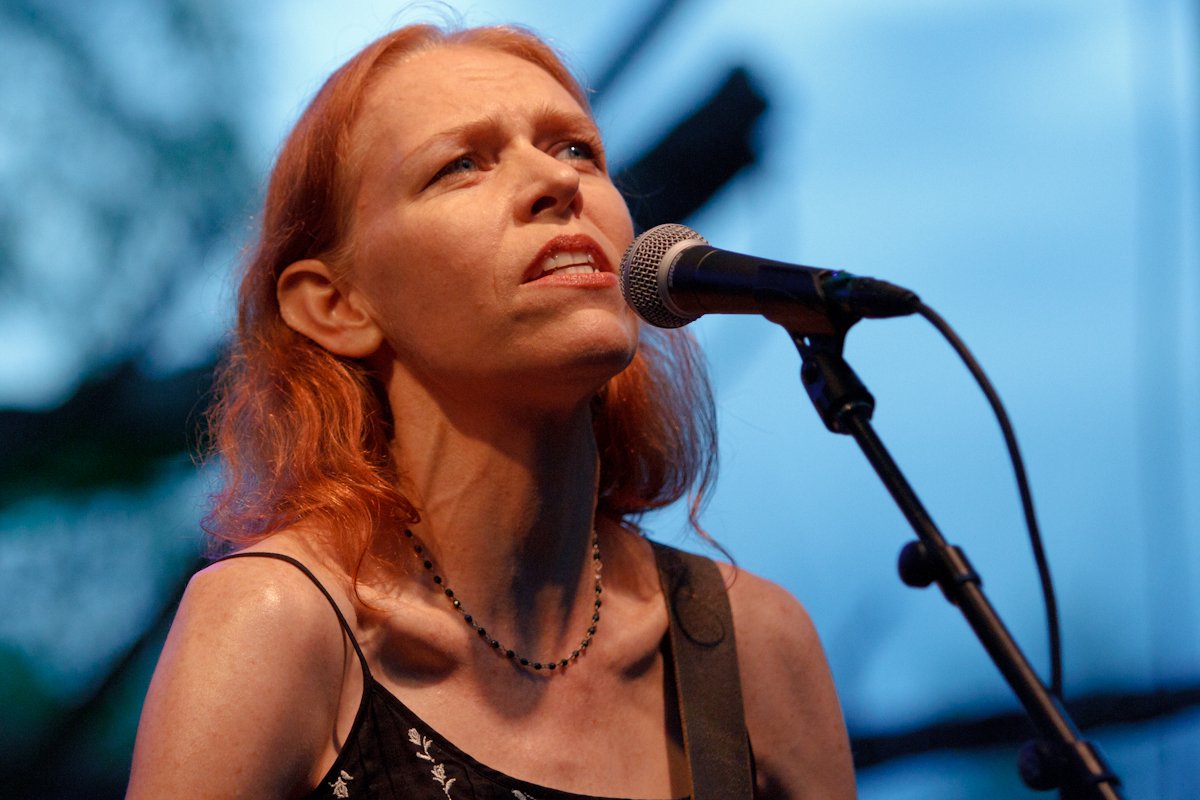 The Minnesota Zoo boasts loudly that their annual Music at the Zoo concert series happens rain or shine. Attendees of the Gillian Welch show last night on July 7 were treated to a test of that weather hubris. While my friend and I ran through a downpour and ankle deep water across the parking lot, wondering seriously if a horrible crash was a lightning strike somewhere on the same pavement, I had my doubts that the show could go on. But we found a bench to sit and watch the penguins do what penguins do until it was time to get our tickets. I’ll give the Zoo the benefit of the doubt and assume that the extra 30-minute wait for will call without any explanation, watching ticketed attendees walk past us, had something to do with the weather. It seemed like an especially disorganized, uncommunicative night in general on the front end. But when all was said and done, tickets were exchanged, ponchos were purchased, and the clouds miraculously broke up while we had brats for dinner by the animal fountain in the main plaza.

The standing room only crowd was so relieved the show was happening and such devoted fans that Gillian’s banjo got its own welcoming applause when a crew member brought it out onto the stage. Naturally, the crowd was more than welcoming when Welch herself appeared, along with David Rawlings, her longtime musical collaborator and between song banter partner. The setlist included songs from more than a decade of albums: “Caleb Meyer,” “Elvis Presley Blues,” “My First Lover,” “Miss Ohio,” “Annabelle,” “Tennessee,” “Orphan Girl,” and the breathtaking “Time (The Revelator),” which earned Rawlings a mid-set standing ovation for his voodoo-like guitar work. Welch fought back with her own stand out moments, introducing recent song “Six White Horses” by saying, “We tried all kinds of arrangements for this, guitar, banjo—in the end we just decided to have Dave play everything.” The crowd got the joke (they got all the jokes) and whooped appreciatively while Welch supplied knee slap and clap percussion for the song, complete with a drum solo/clog dance.

It’s hard to classify exactly what it is that Welch sings—it’s not country and it’s not folk, per se. Those are small words for what feels more like an Americana time capsule. It’s folk of course, but it’s a heady, individual stew of bluegrass, Appalachia and a truly timeless dedication to the people who began those musical traditions. They themselves seem like they’ve been plucked out of some depression-era Kentucky concert hall, with Welch’s unhurried accent, comfortable cowgirl boots and Rawlings’ surprisingly soft speaking voice for such a tall guy in such a John Wayne hat. Add to that the fact that they’ve been playing together so long it feels like watching one person with four arms. They trade a sparse set of banjos, guitars and a harmonica with no other accompaniment. And yet their performance never felt like just two people playing music. They are two people, who make self-depreciating and self-aware jokes easily (Welch introduced “Caleb Meyer” by saying “You all have been so nice we’re gonna play you a killin’ song.”) and frequently, not reveling in the attention of the stage but comfortably used to it. And whether its that comfort and banter, the remarkable skill with which they play, or the many vibrant characters in their songs, they are two people who feel like a multitude when they sing.

In “Tennessee,” another song from Welch’s most recent album, The Harrow & The Harvest, she huskily croons “It’s beefsteak when I’m workin, whiskey when I’m dry, sweet heaven when I die.” It’s a pretty good summary of their performance—the meat of legitimate musical expertise, the whiskey joy and sorrow in what they play and the grateful altered state the audience finds themselves in. That otherworldly feeling kicked in completely during their duo’s second set, when it was finally dark in the small outdoor amphitheater on the edge of the lake. They closed out the show with a truly Dave and Gillian rendition of the famous Johnny and June song “Jackson.” Just a little bit slower than you remember it but four times as full.