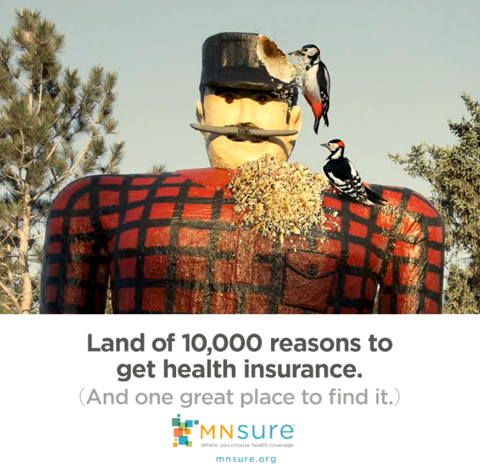 Norwegian-American author Ole Edvart Rølvaag–oh, let’s call him what he was, a St. Olaf professor–set Giants in the Earth on the windswept Dakota prairies, but the book resonates for Minnesotans too.

These days there are giants in the news, a fact that may perplex some Minnesotans who took issue with the state’s pop icons in 2010.

Paul Bunyan and Hermann the German have dominated the North Star state’s gargantuan feed. A marketing campaign for MnSure, the state’s health insurance exchange mandated by the Affordable Care Act (aka Obamacare) trotted out Bunyan and Babe the Blue Ox as accident-prone mascots.

Should Bunyan get the axe?

As a means of raising awareness among uninsured 11-year-old boys who own boats, homes and gym memberships, the new campaign is brilliant marketing, but some in Northern Minnesota, which so had the giant lumberjack first, have launched spirited opposition to the use of the axe-swinging avatar. The Brainerd Dispatch reports that state senator Carrie Ruud (R-Breezy Point) is the latest conscientious objector in the marketing war to insure all Minnesotans.

In Ruud wants Bunyan removed from MNSure ads, Associate Editor Mike O’Rourke reports that Ruud has shared her objections in a letter to Governor Dayton:

. . . “The advertising campaign portrays Paul Bunyan as an accident-prone insurance nightmare and not the symbol of strength he has come to represent for Greater Minnesota,” she said in the letter. “This portrayal does not reflect kindly on our communities who respect this treasured symbol as part of our great tradition and heritage.”

She wrote that MNsure advertising decisions have already been made and money has been allocated and it may be too late to correct these mistakes. She noted that Dayton has admitted to other mistakes during the legislative session that he was looking to rectify.

“This is an opportunity for you to show leadership by remedying this mistake as well,” she wrote. “Paul Bunyan is a Minnesota icon and should not be used as an actor to sell insurance by the government. He’s a symbol of pride for Greater Minnesota residents and I fear he has been made into a punch line.” . . .

. . .In addition to her letter to the governor, she released a similar letter published in today’s Brainerd Dispatch (Page 6A), and called both the governor and April Todd-Malmlov, executive director of MNsure. Ruud said Thursday she had not received any response from the governor’s office and received a message from Todd-Malmlov’s office that she was out of the office on a school shopping excursion with her daughter. “They don’t think it’s an important issue,” Ruud said. “I think, for greater Minnesota it’s a big issue.”

She’s not alone in thinking it’s a big deal. More on that in a bit. 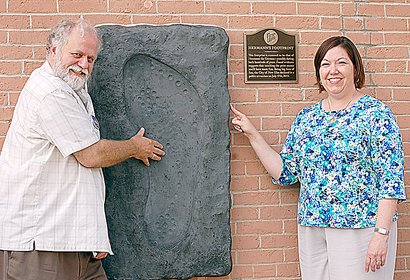 The statute of Hermann the German on top of the Minnesota River Valley wall in New Ulm was also at the center of a marketing plan under siege. Kevin Sweeney reports in the New Ulm Journal article, Hermann footprint ‘legend’ gets stubbed toe:

Creating a legend can be a lot harder to do than it first appears.

The New Ulm Convention-Visitors Bureau found that out this week with the legend of the giant Hermann’s footprint now hanging on the side of the Chamber of Commerce. . . .

To drum up interest, the marketing firm came up with the story that the footprint was an artifact discovered in a dusty corner of the Chamber of Commerce’s basement, with an old handwritten note that said “all who touched the footprint would have more fun for a day,” and intimating the artifact might have been made in Germany. The CVB has been asking people to submit their ideas about how the footprint came to be. . . .

To drum up interest, the marketing firm came up with the story that the footprint was an artifact discovered in a dusty corner of the Chamber of Commerce’s basement, with an old handwritten note that said “all who touched the footprint would have more fun for a day,” and intimating the artifact might have been made in Germany. The CVB has been asking people to submit their ideas about how the footprint came to be. . . .

Giants and other Defilements in the Land

Part of Minnesota’s iron ore range in the north eastern part of the state is called the Mesabi Range which includes Giants Ridge. The Ojibway Indians called Mesabi, the sleeping giant. . . . Copper was also mined from the North Shore and Great Lakes area. According to the International World History Project, Ancient Phoenicians (descendants from the Canaanites) used copper from this area of Minnesota in the building of Solomon’s Temple. It is believed that the giants in this land came over with these Phoenician traders and miners.

Perhaps that’s something Mining Truth could touch on. But we digress. There’s more:

Minnesota holds the legends of Paul Bunyan and Babe the Blue Oxand also The Jolly Green Giant, both products of advertising campaigns. Other ‘giant’ legends are Big Ole, St. Urho, The Giant Voyageur and Hermann the German.

Paul Bunyan is a mythological lumber jack who is said to have dug the Grand Canyon by dragging his axe behind him. The legend claimed Paul Bunyan made Mt. Hood by piling rocks on top of his campfire to put it out. Part of the myth told how the Great Lakes were formed to be used as a watering hole for his giant blue ox, Babe. Another story said that when a tank of water Babe was hauling broke open, it formed the Mississippi River. “We declare that Paul Bunyan is not the Creator!”

If only those who object to Obamacare knew that Paul Bunyan wasn’t sacred, perhaps his assist to MnSure wouldn’t be so scary. As for Hermann, those wishing have more fun for a day should watch it:

Hermann the German is a 27′ statue of a German warrior with his sword raised and stands on a hill in New Ulm. The statue is made of iron covered with copper standing on a 70′ column of iron and supported by 16 columns of iron. This statue is said to be the symbol of all citizens of German heritage, the main immigrant people group in Minnesota. It was given to the city of New Ulm in 1897 and paid for by the Sons of Hermann, a fraternal organization formed in New York City in 1840 for the protection of German immigrants. The Sons of Hermann are an offshoot of the Odd Fellows and German Jews participated fully in the Sons of Hermann. There is a matching statue in North Rhine Westphalia in Germany. “We declare that Hermann the German is not our defender!”

That should settle it. No Paul Bunyan or Hermann the German worship allowed. It’s okay–nah, a matter of the soul’s survival–to take them off their pedestals, even to promote Obamacare.

Photo: Giants just don’t get worshipped like they once did, so those 2010 prayers must have worked. A screenshot from a MnSure (above); A phony footprint, photo by Josh Moniz (below).