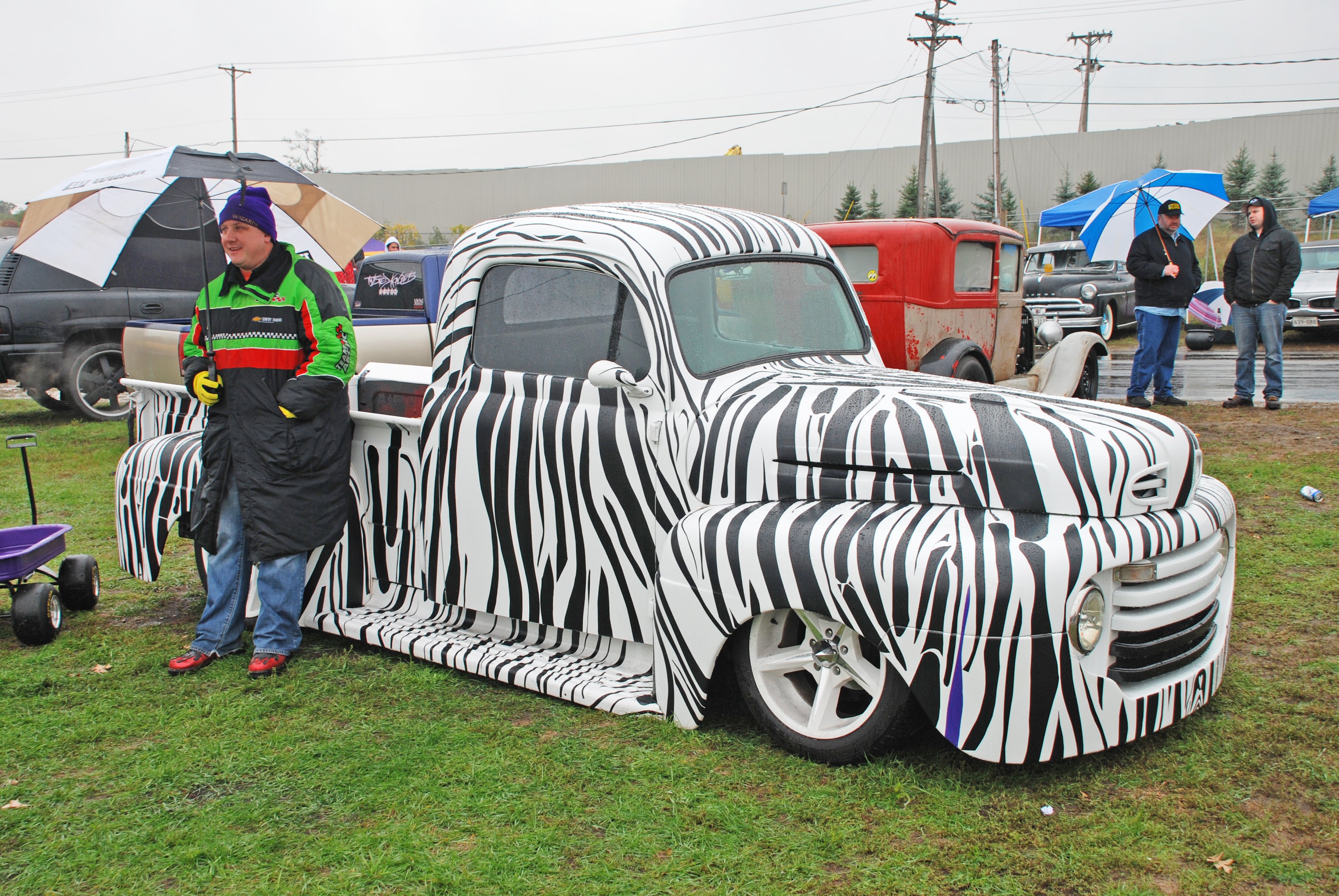 Marc Lawrence created a zebra effect by gluing black paper on his white 1948 Ford pickup. (All photos by Bill Huntzicker)

Cross a Halloween party with a car show and you get the annual Frankensteiners Ball. (See lots of photos at end of article.)

The annual event includes contests for best Halloween costumes for adults and children, the best flame-throwing car, the car with loudest pipes, and a limbo contest for the car that can go the lowest.

Last year on a sunny day, the show attracted 1,156 cars and perhaps hundreds of children who walked from car to car picking up trick-or-treat candy from buckets club members displayed with their the cars.

On October 20, the number of children was noticeably smaller but no less enthusiastic about picking up candy from car owners offering it.

Within a day, the Frankensteiners Car Club had posted an event picture of club members at the event with a note thanking “the brave spectators,” vendors, and participants who helped make “another great show, smaller but no less great.”

The Frankensteiners Ball started in 2006 in the parking lot of a Coon Rapids bar and moved in 2009 to the Anoka County Fairgrounds and in 2012 the club began talking about looking for an even larger venue.

Ed Reinke, whose project is restoring a 1939 Plymouth sedan, said he was not worried about getting his car wet. “I’m quite certain it’s seen rain before,” he said about the car he purchased from someone who had stored it on a farm.

Reinke was more concerned about making sure that children got the Tootsie Pops he was handing out without getting the candy wet.

Walt LaRoche used his classic 1955 Ford Crown Victoria as a place to keep warm with the engine idling and the heater running.

LaRoche said he’s a member of the Minnesota Street Rod Association, a much larger and older group than Frankensteiners. Although this was his first Ball, he has regularly attended MSRA’s Back to the 50s, which held its 40th annual show in June at the Minnesota State Fairgrounds.

Many participants see the Frankensteiners Ball and Back to the ‘50s as Minnesota’s two biggest car events of the year.

[FULL DISCLOSURE: The writer’s adult son is a member of Frankensteiners.] 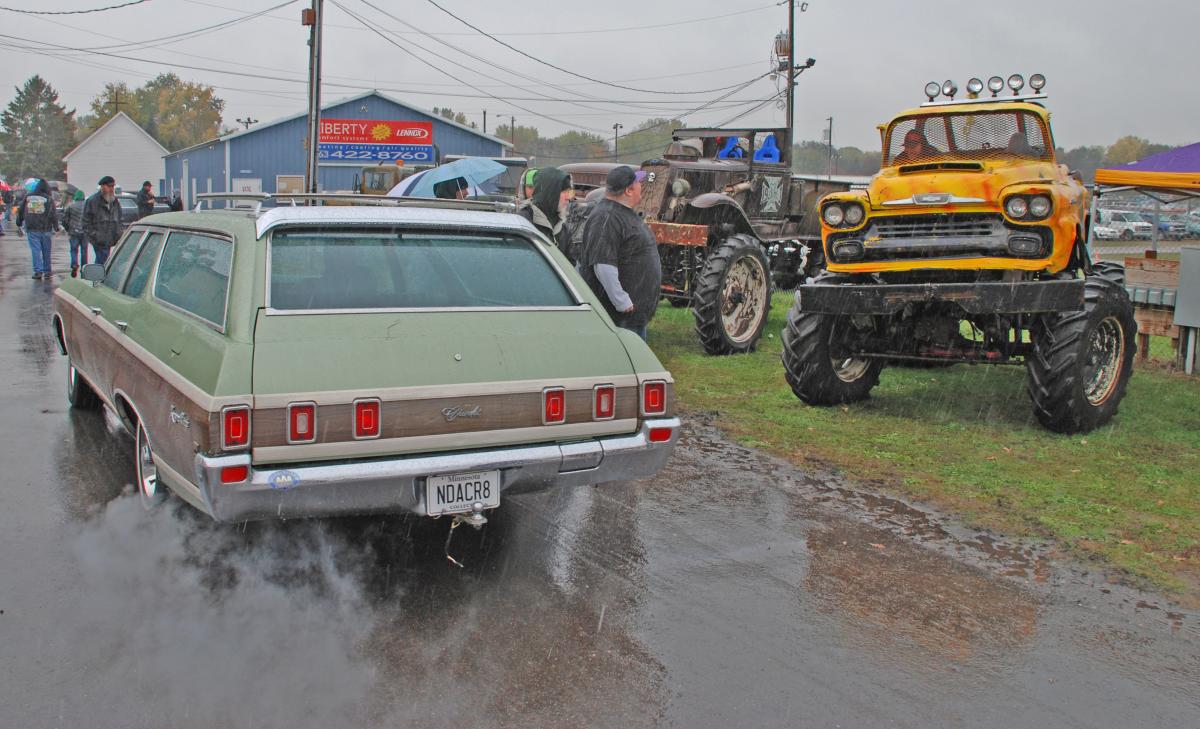 Well-preserved old cars and creations made from car, truck and tractor parts shared the field at the Frankensteiners Ball at the Anoka County Fairgrounds. 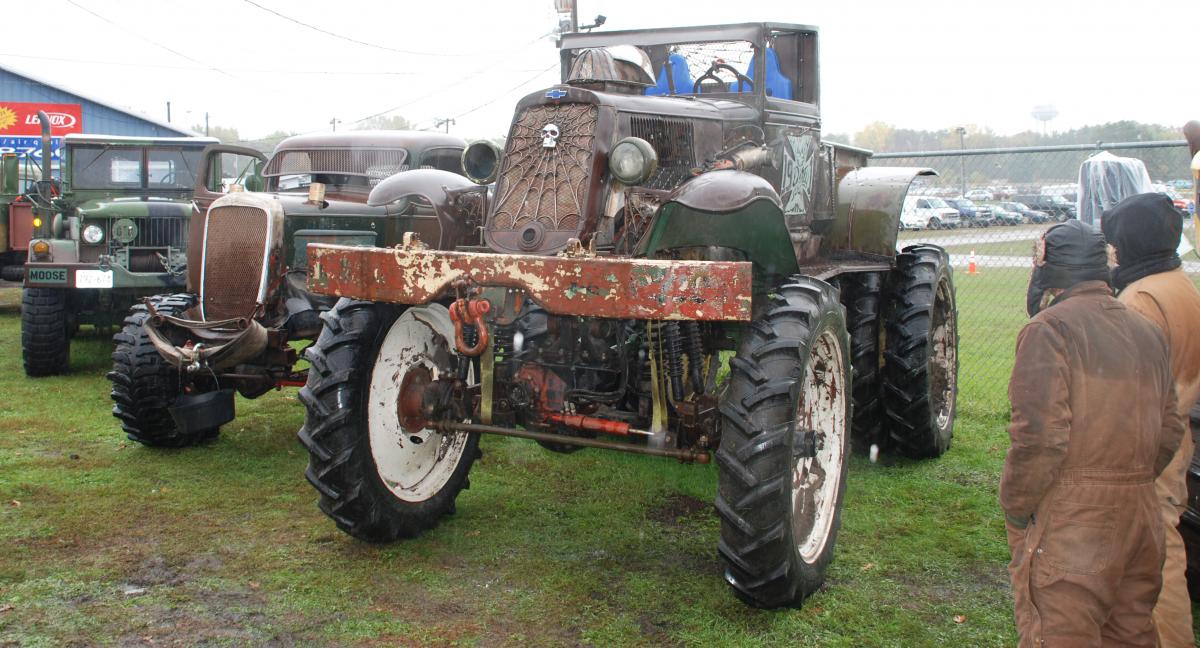 Some vehicles at the Ball are hard to classify: Is this a tractor, pickup or hot rod car? 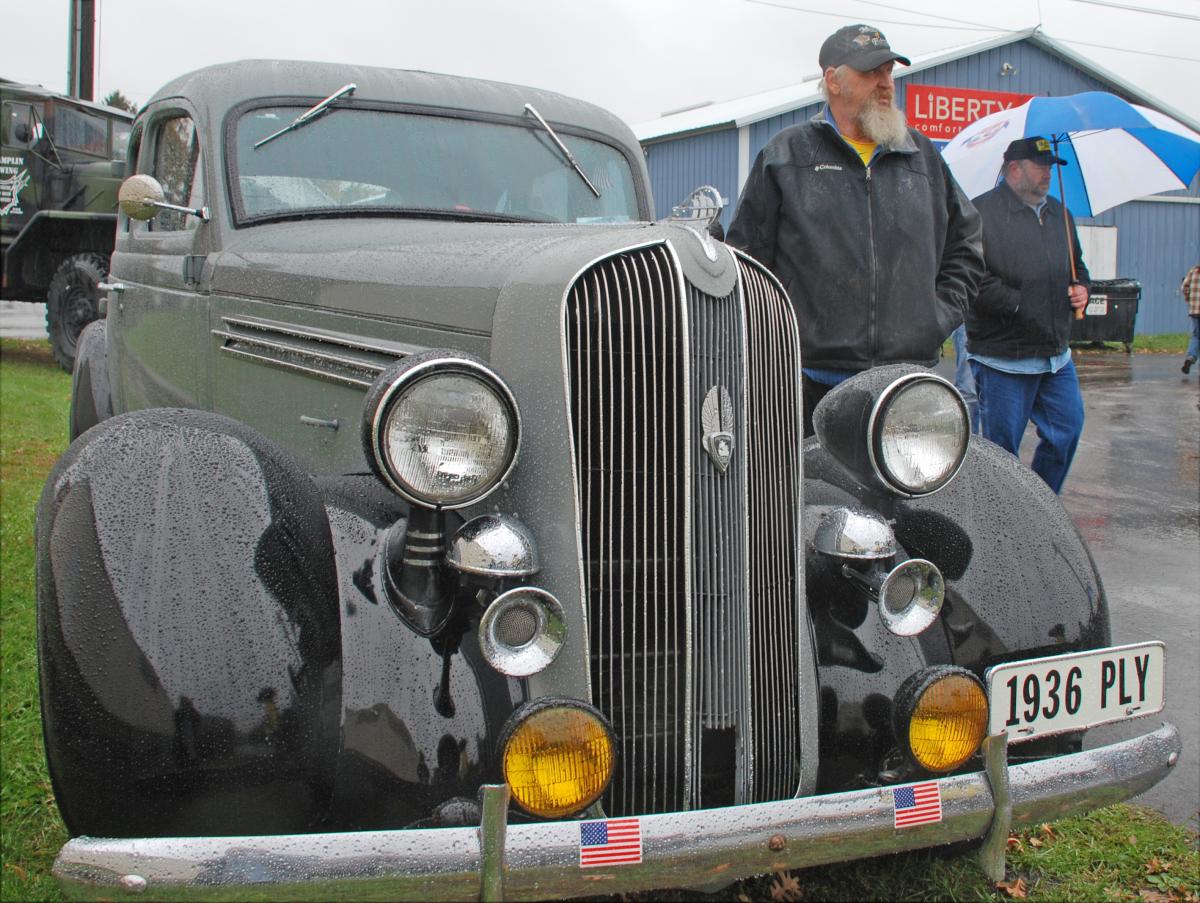 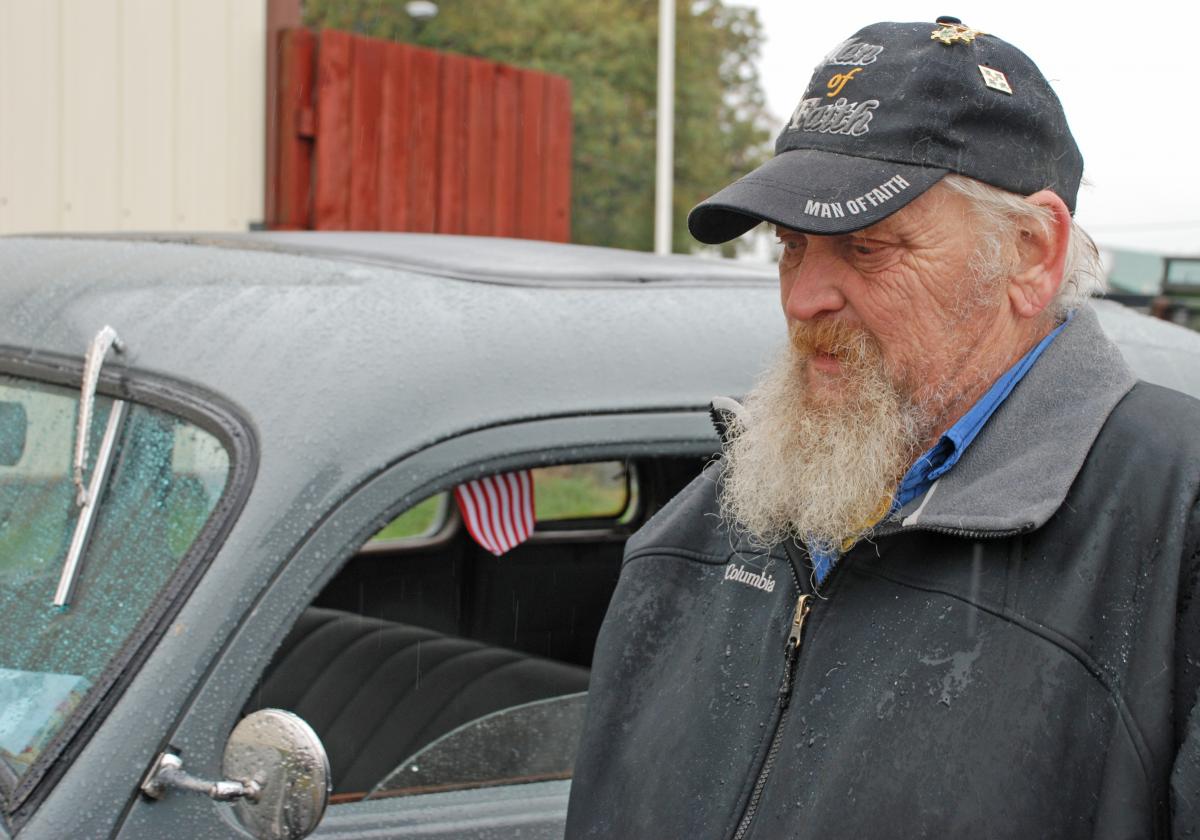 “I’m quite certain it’s seen rain before,” said Ed Reinke about his decision to take his 1936 Plymouth to the Frankensteiners Ball in the drizzly morning. Reinke has restored this car himself. He purchased the car from a farmer who told him about it at the Back to the ‘50s car show. 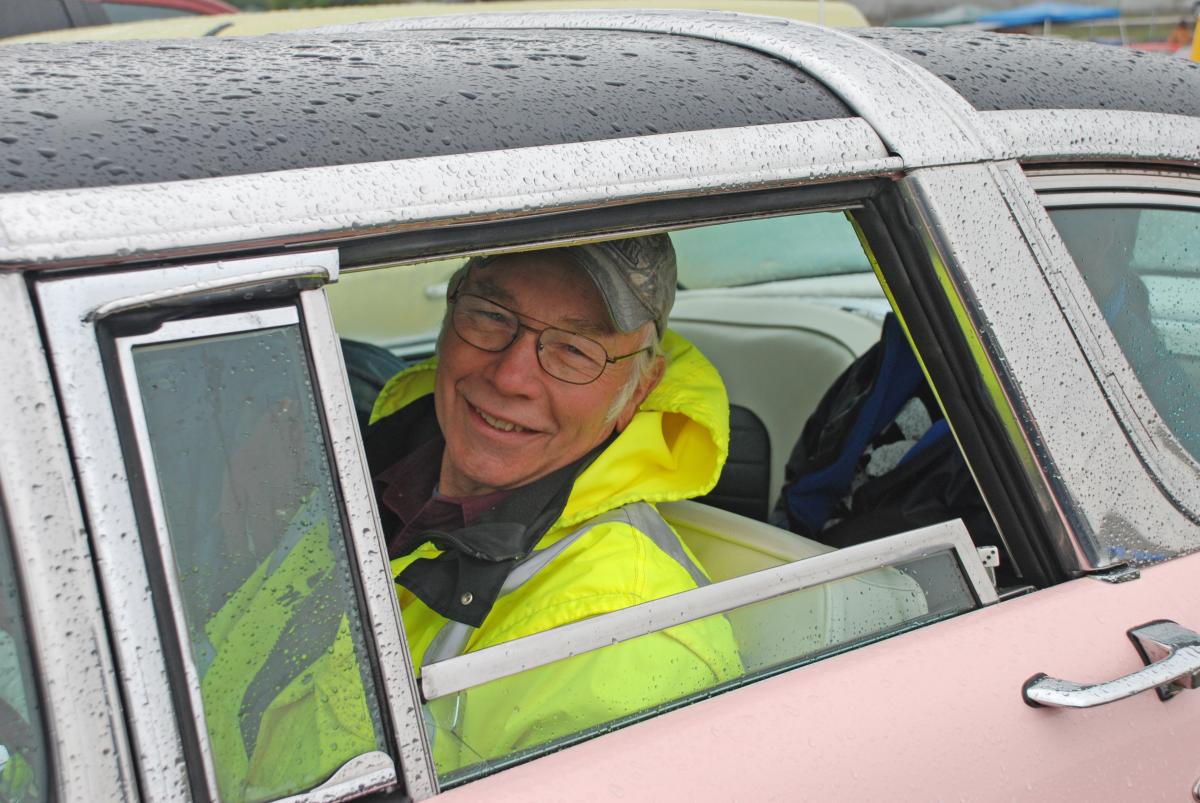 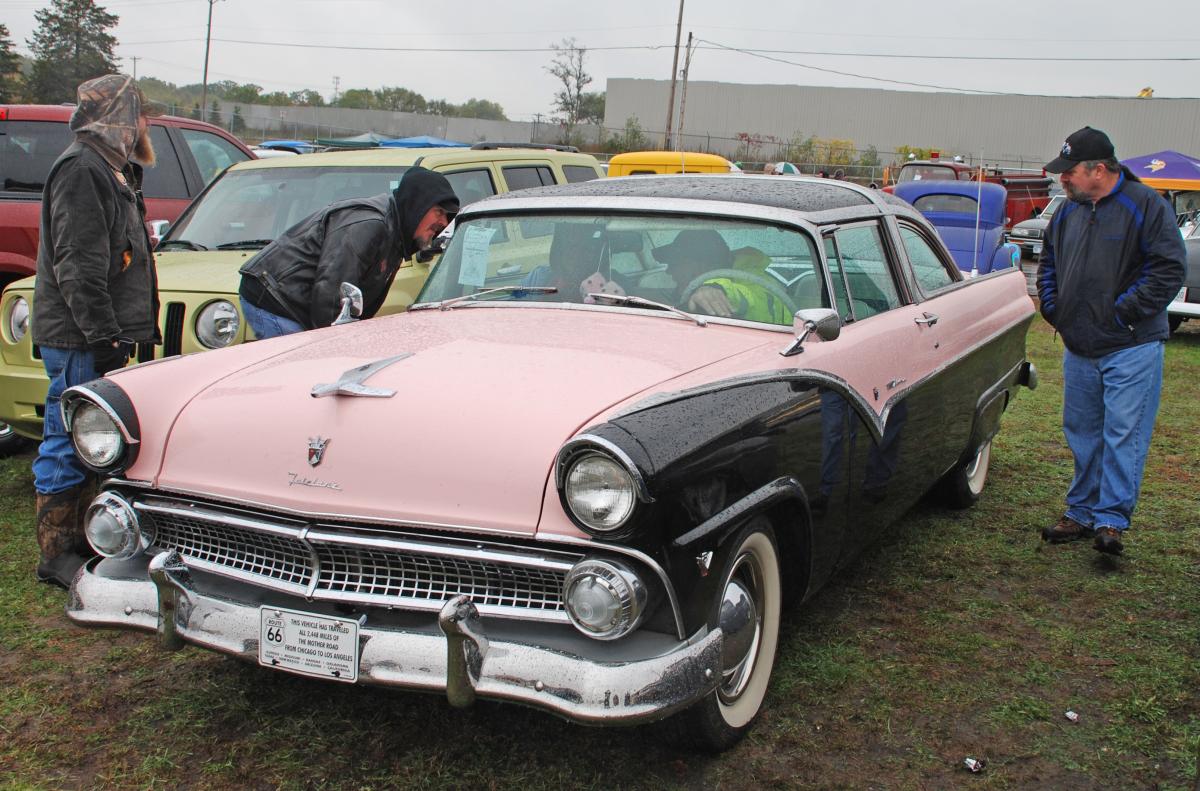 Walt LaRoche has driven his classic 1955 Ford the entire 2,448-mile length of Route 66 from Chicago to Los Angeles, as stated on his license plate. The metal band across the top marks it as one of the original cars called Crown Victoria. He invited friends to sit in the car to keep warm. LaRoche takes his car to the Back to the ‘50s show every June. 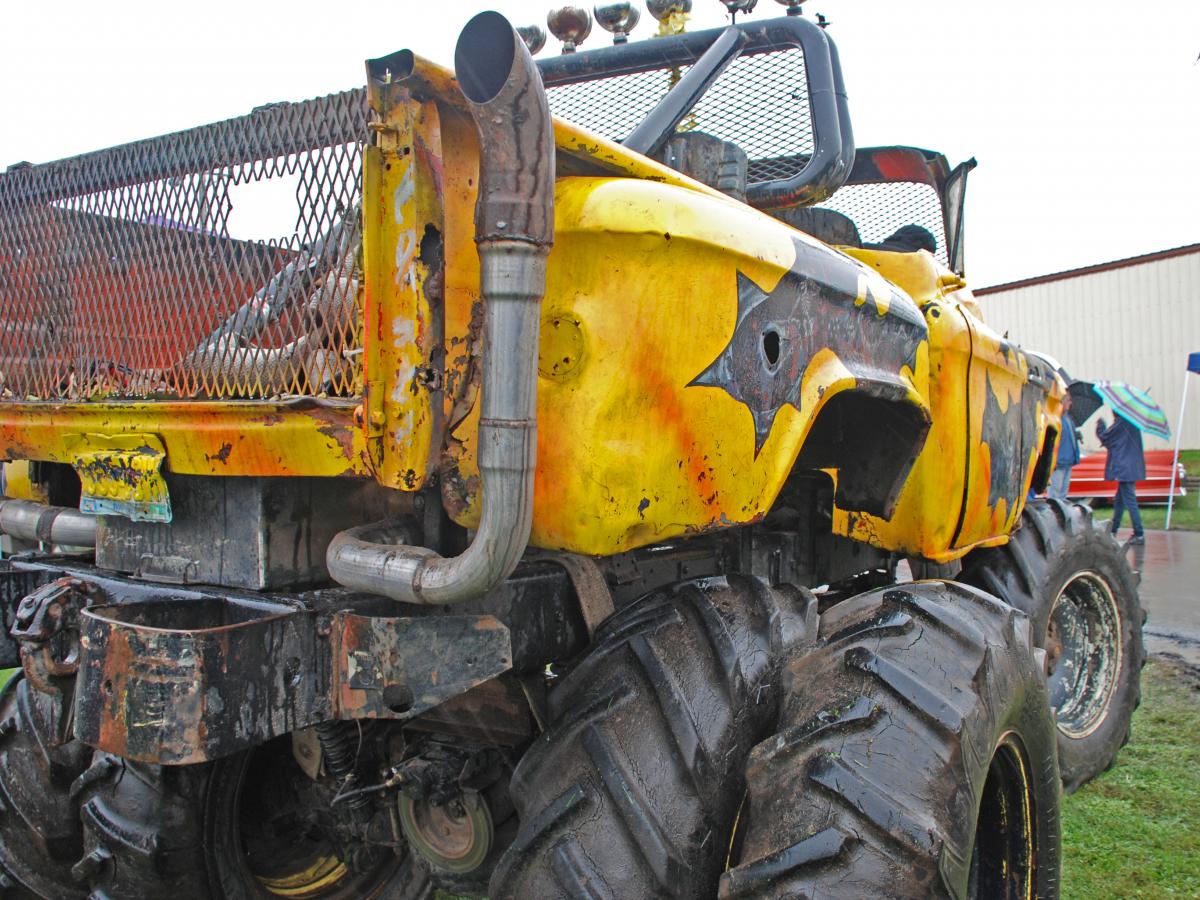 At least part of this vehicle began life as a 1958 Chevrolet pickup truck. 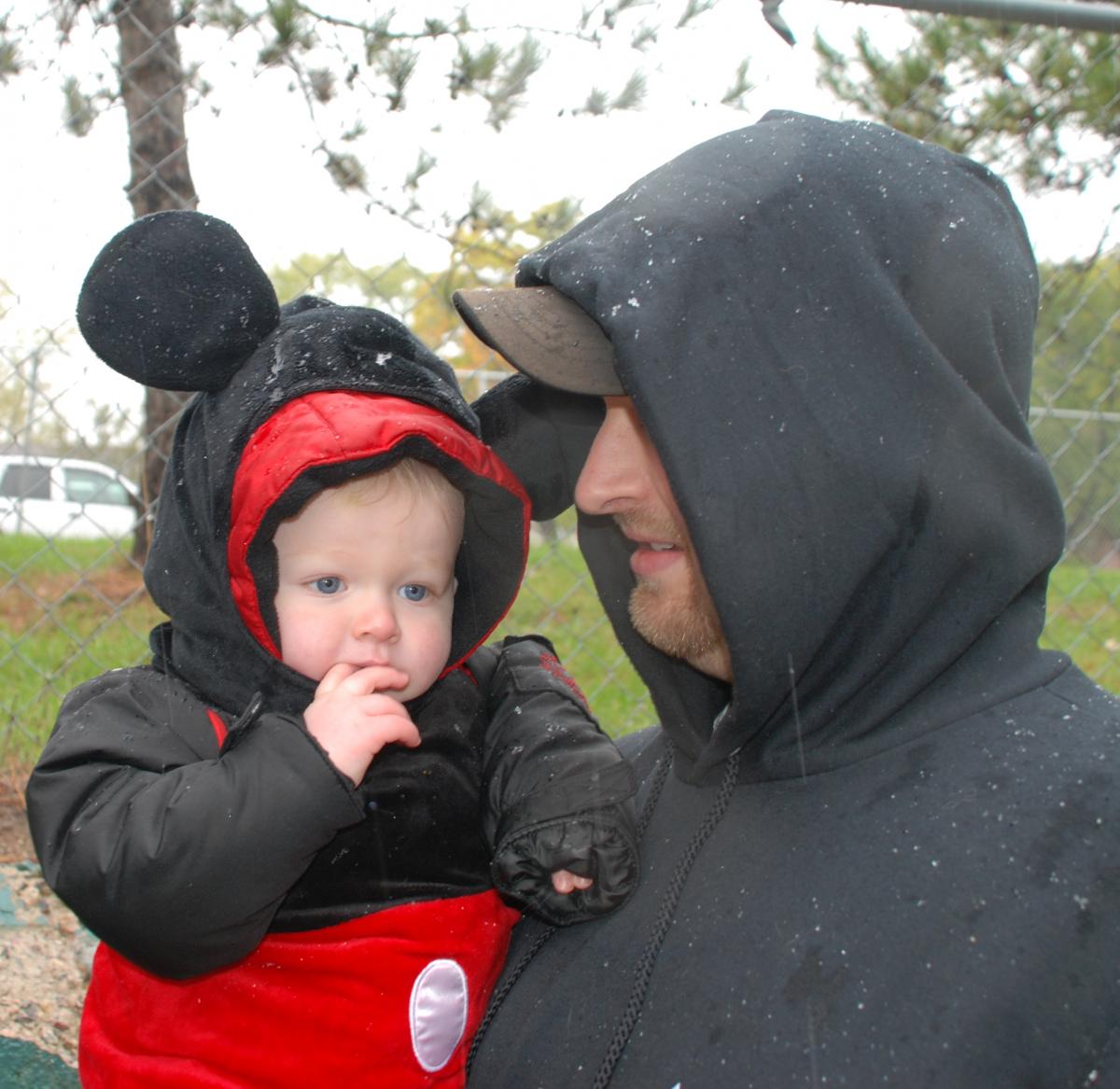 Mickey Mouse seems a bit apprehensive as he and his father prepare for the costume contest. Snowflakes mixed with raindrops on their coats. 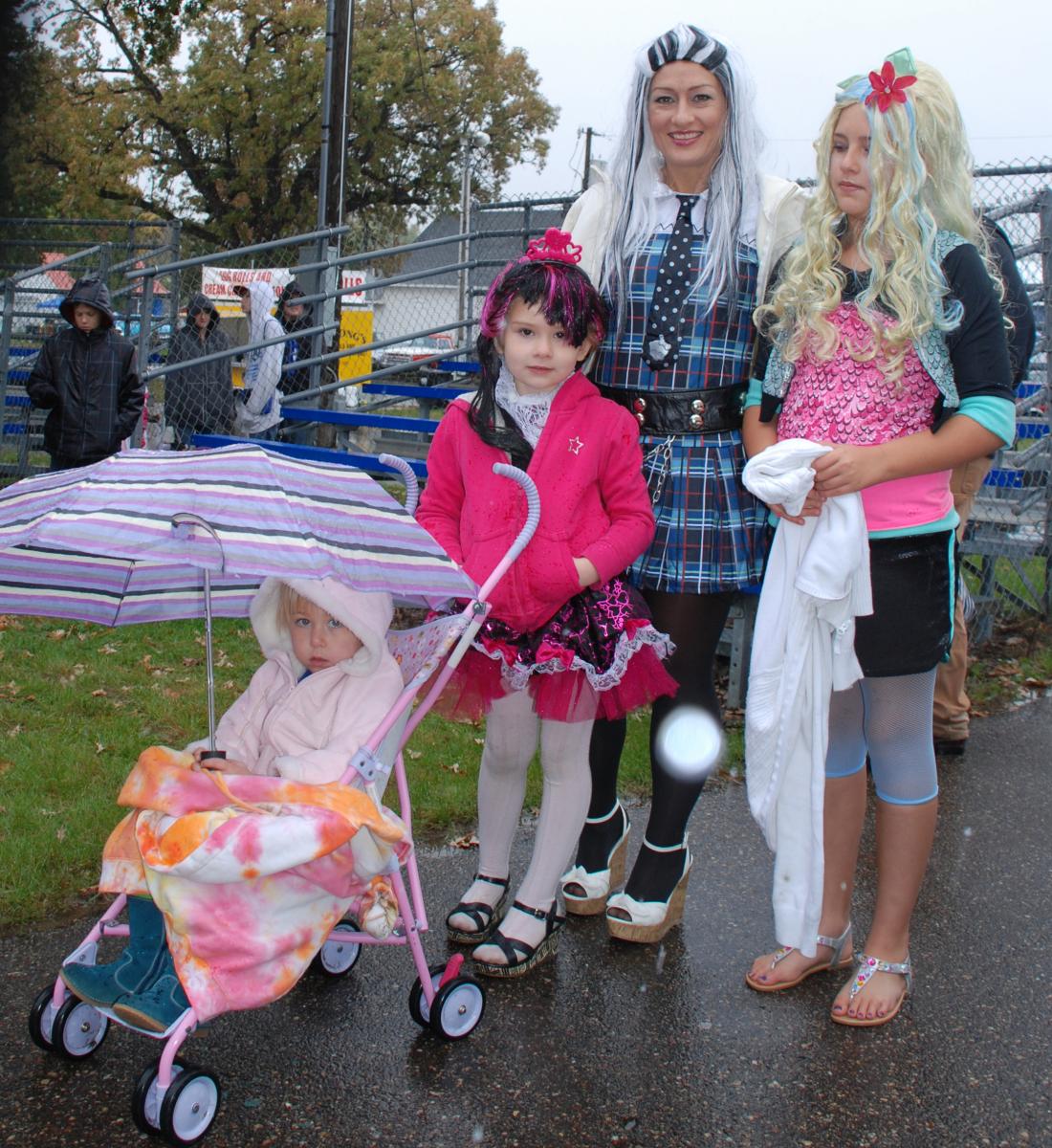 The female members of the Niederstadt family – (left to right) Hazel, Emmy, mother Lauri, and Amilia – came dressed as Monster High Dolls for the costume contest. 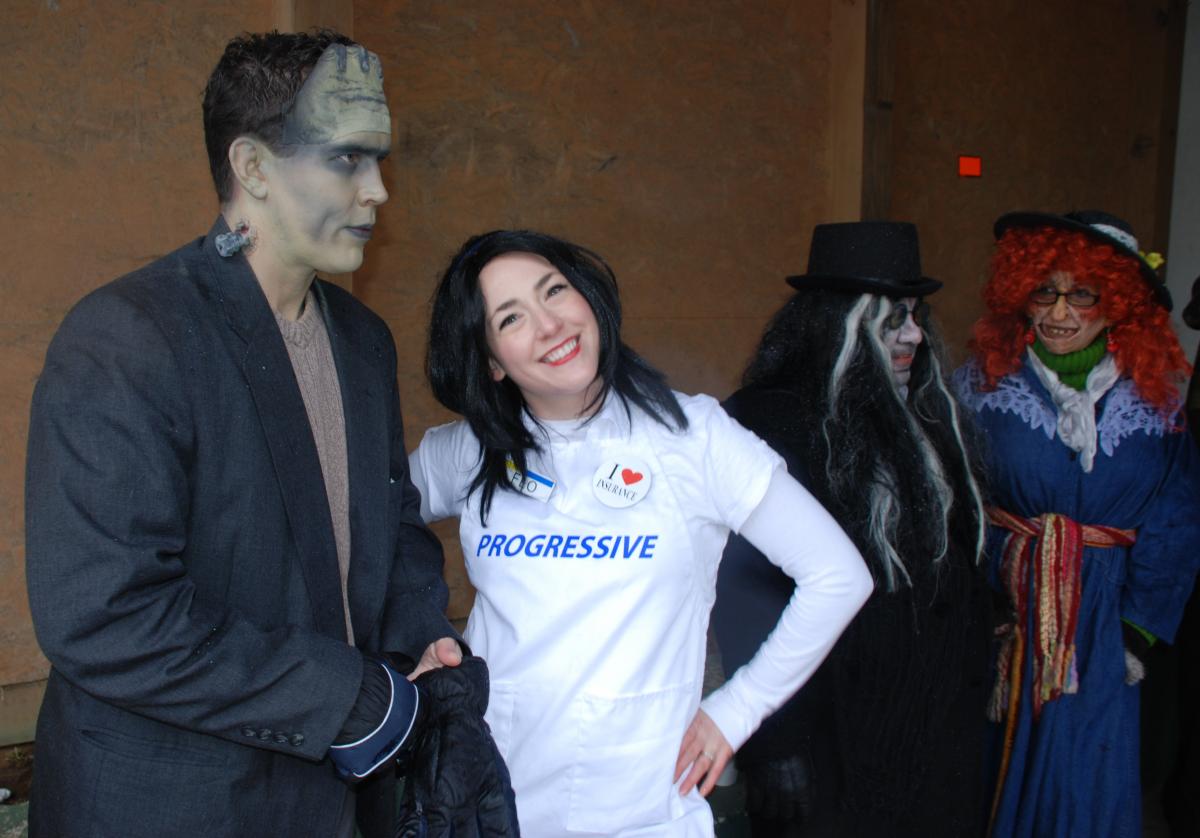 Adults got into the costume contest as much as the children. Brian and Molly Paulson came as Frankenstein and Flo, who sells car insurance. They agreed her insurance would cover damage her monster does but with a high deductible. Behind them is a zombie couple. 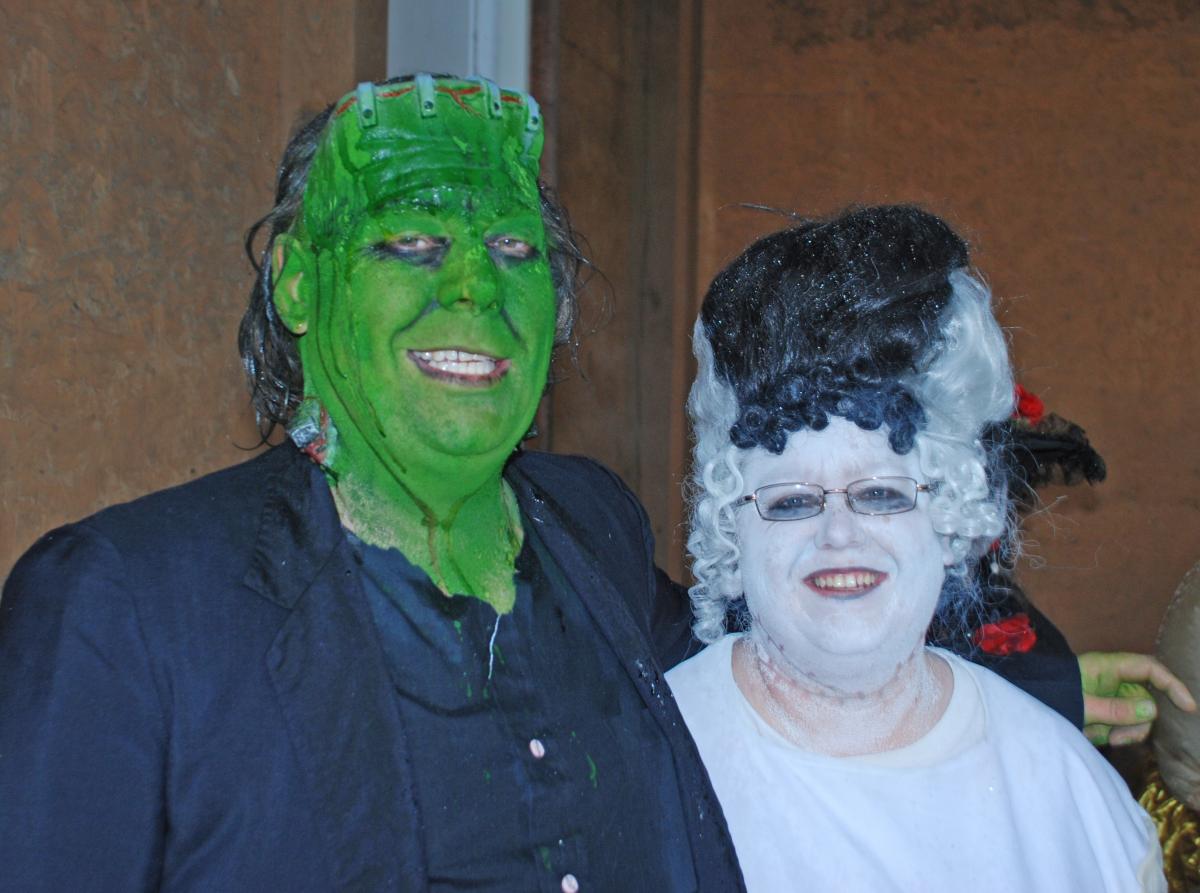 Josh and Dawn Brekke dressed as Frankenstein and his bride. 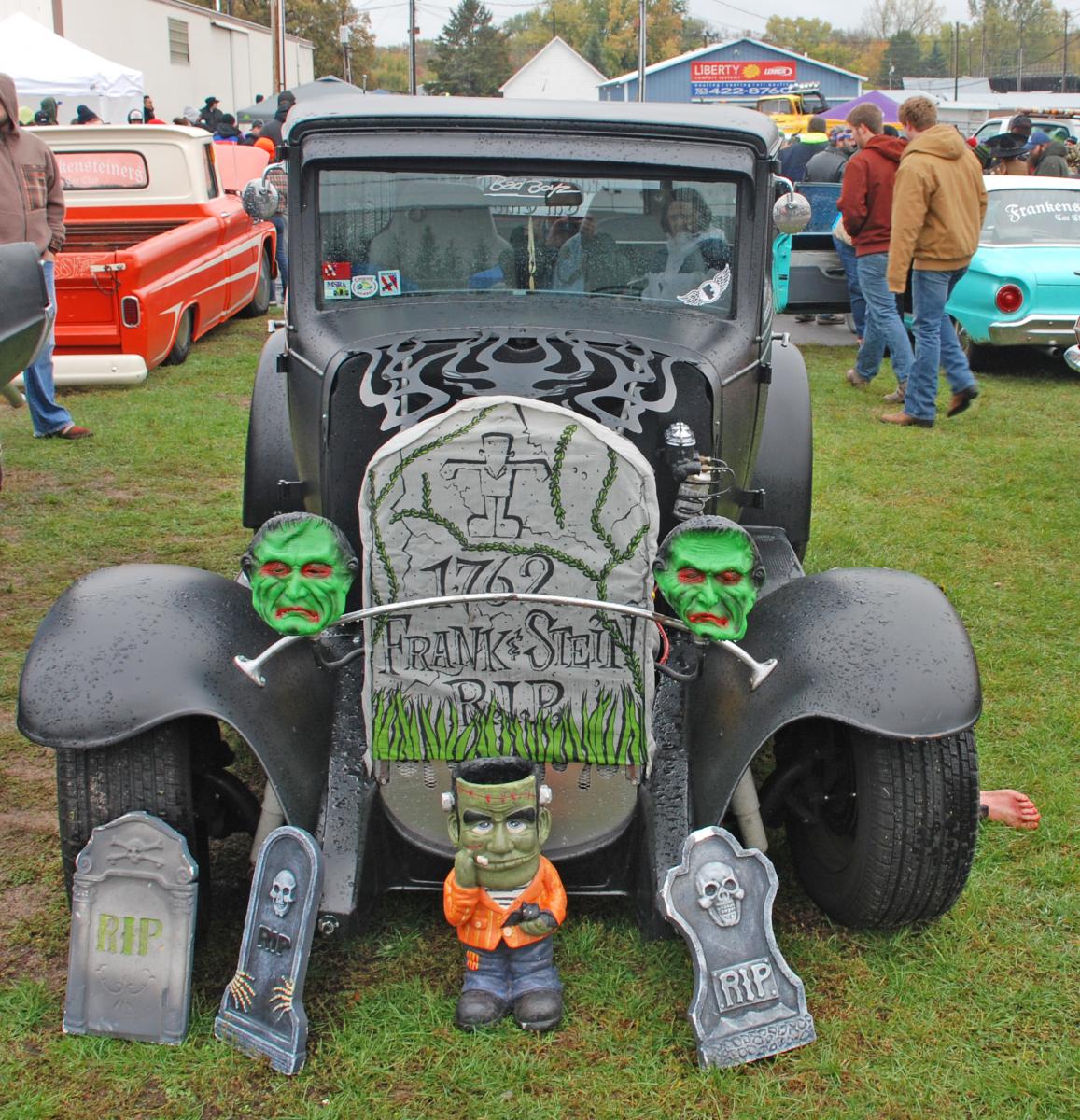 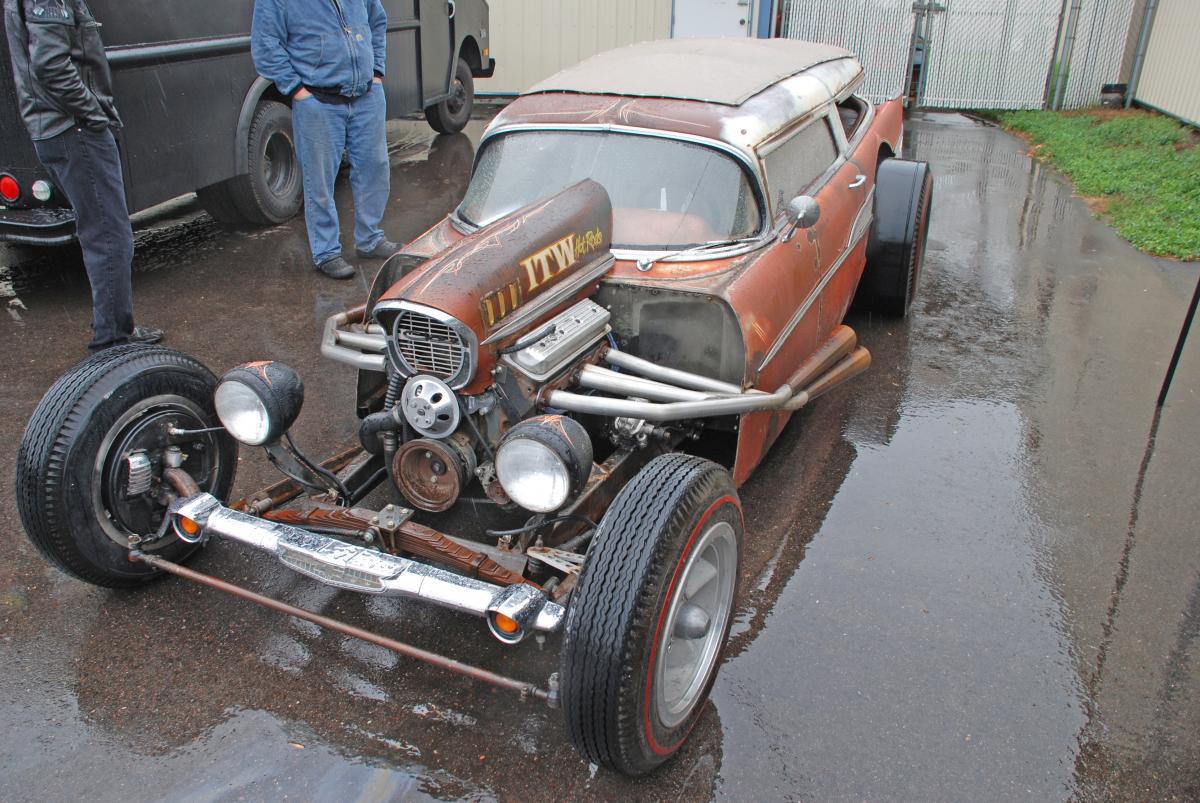 This engine looks big on this small rat rod that holds pieces from a 1957 Chevy Nomad wagon. 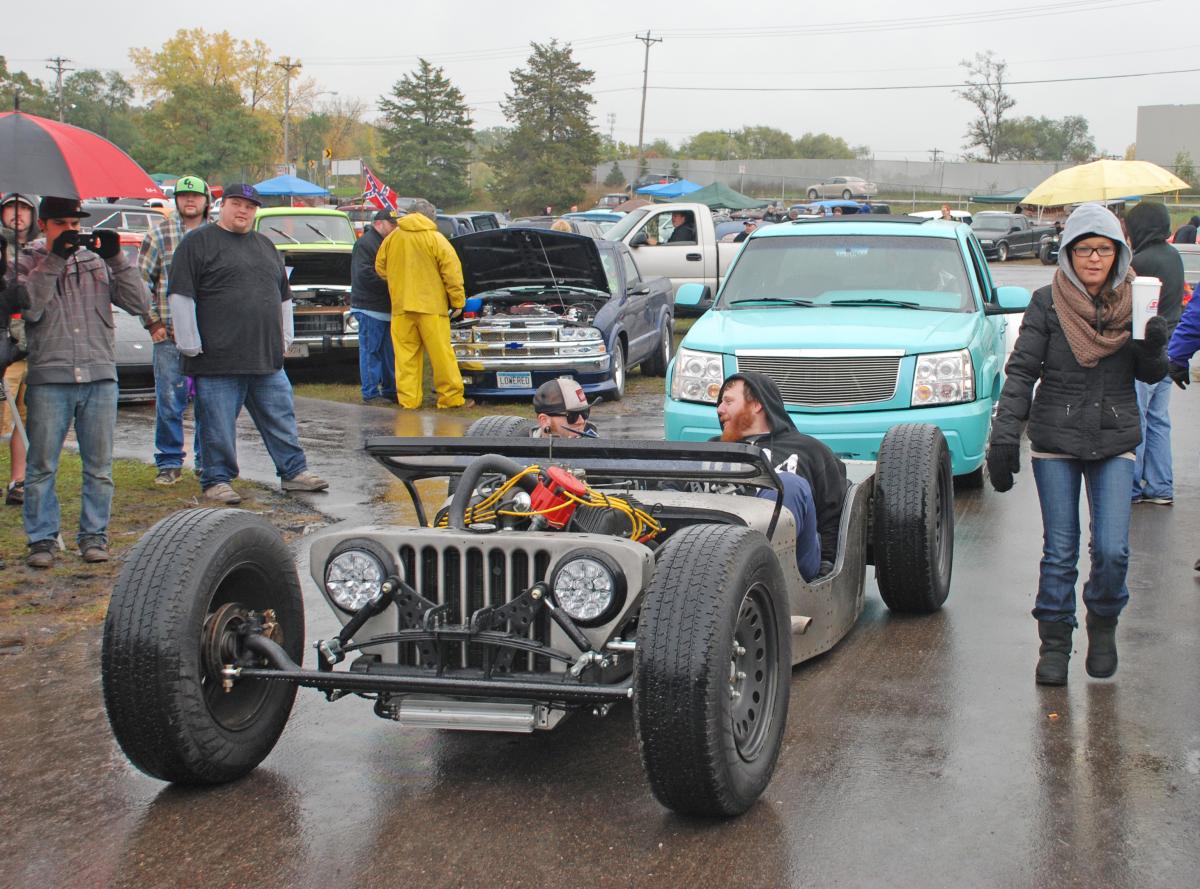 Cars and pickups line up for a limbo competition for low rider vehicles. Odds are very good that the Willys in the foreground will pass under a lower bar than the blue 21st century Chevrolet with a Cadillac front end. 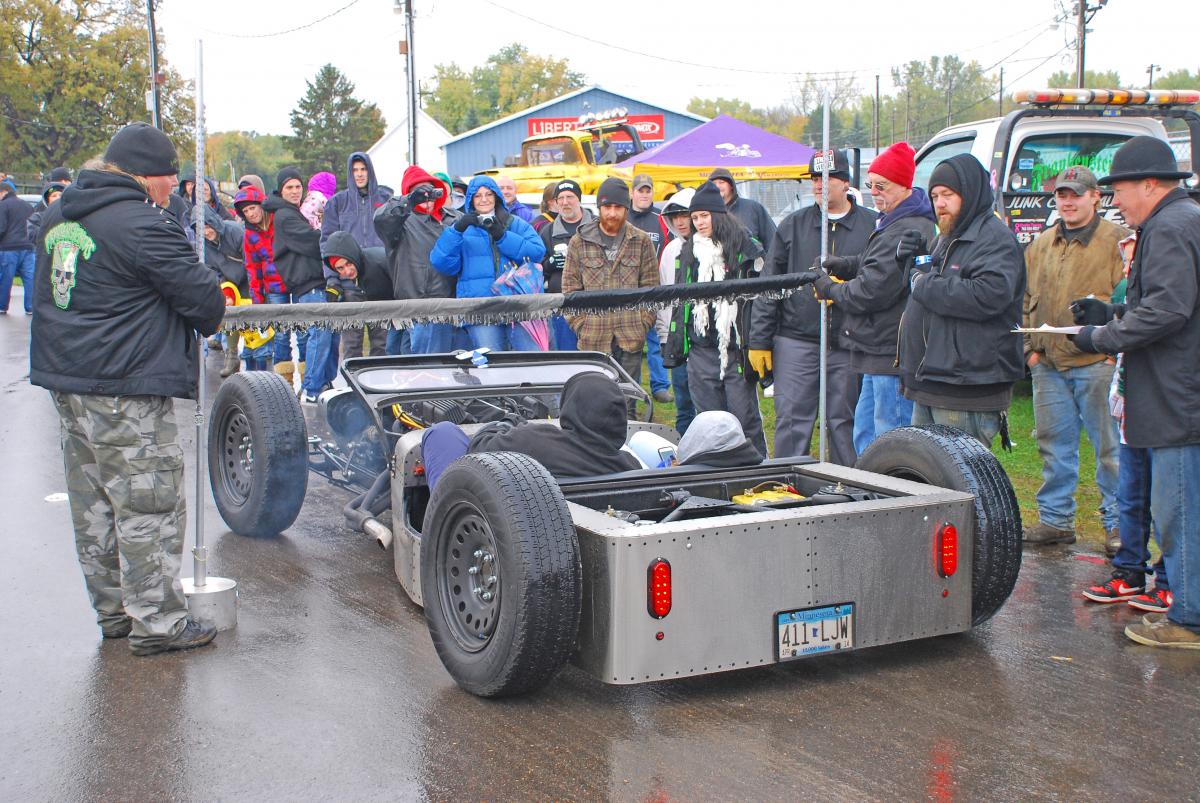 The rear view mirror on the fold-down windshield was the highest point on this customized Willys vehicle that won the limbo competition. 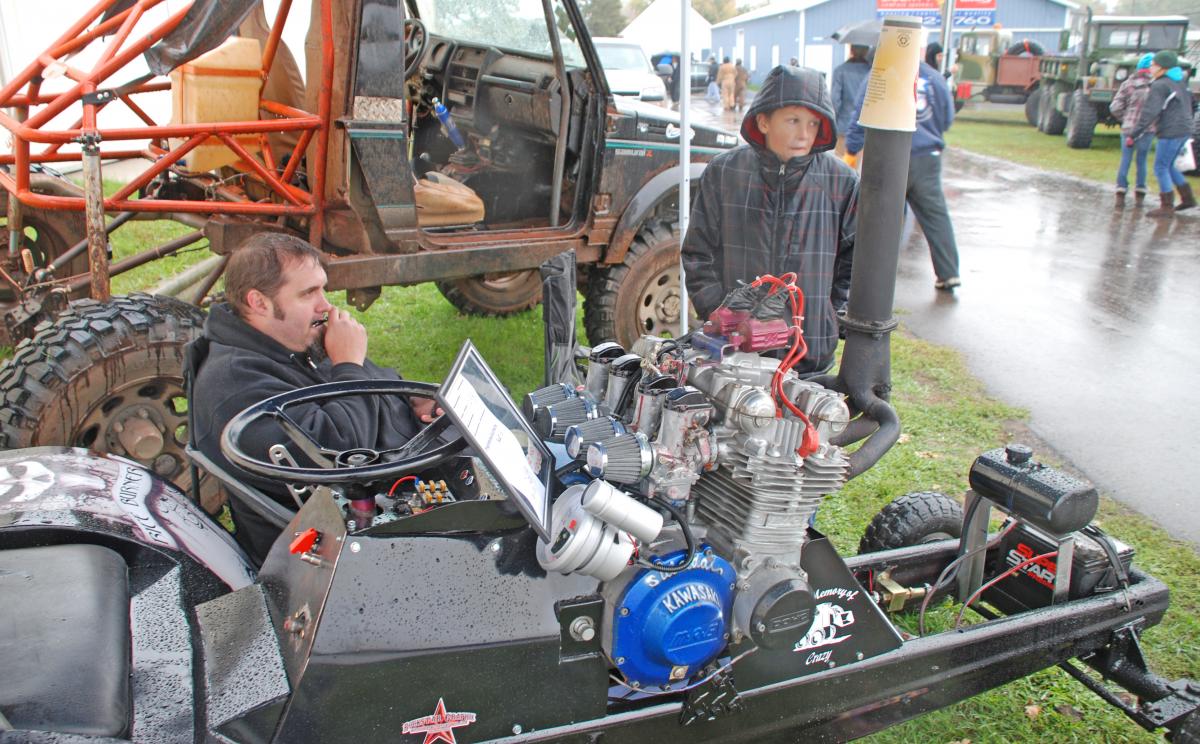 Casey Cowden (left) and Tyler Cowden with their motorcycle converted to a tractor for use in motorcycle tractor-pulling competitions. 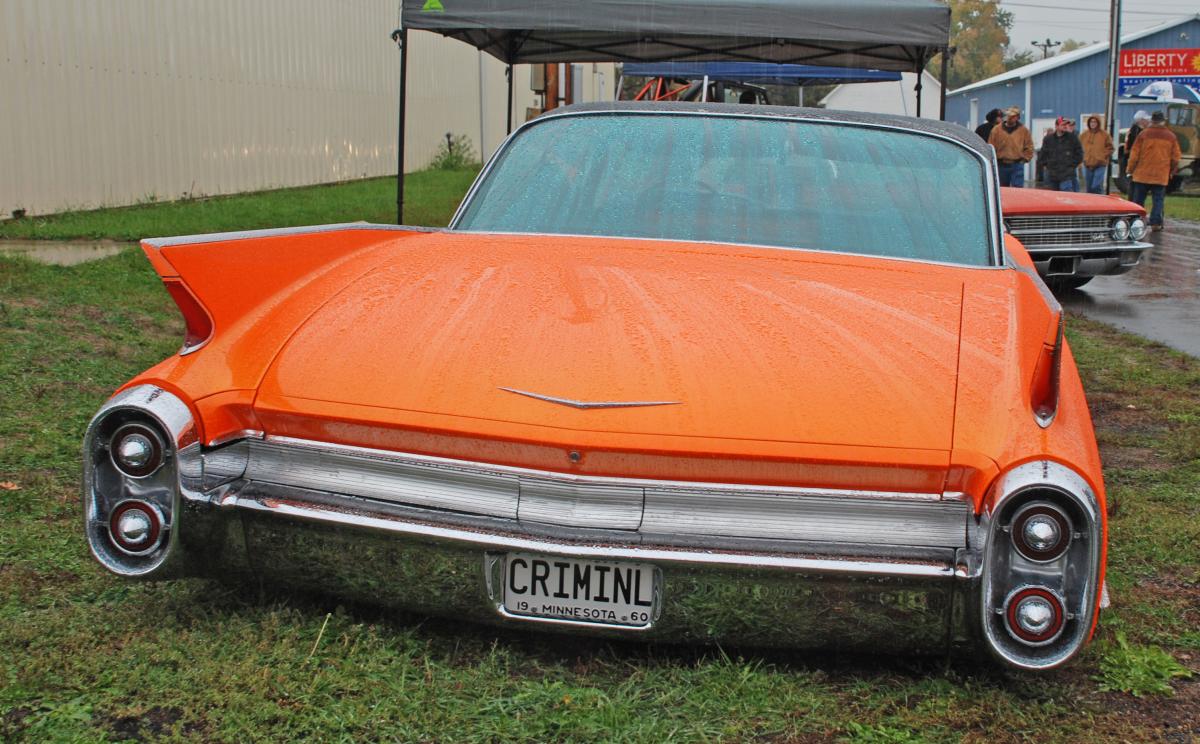 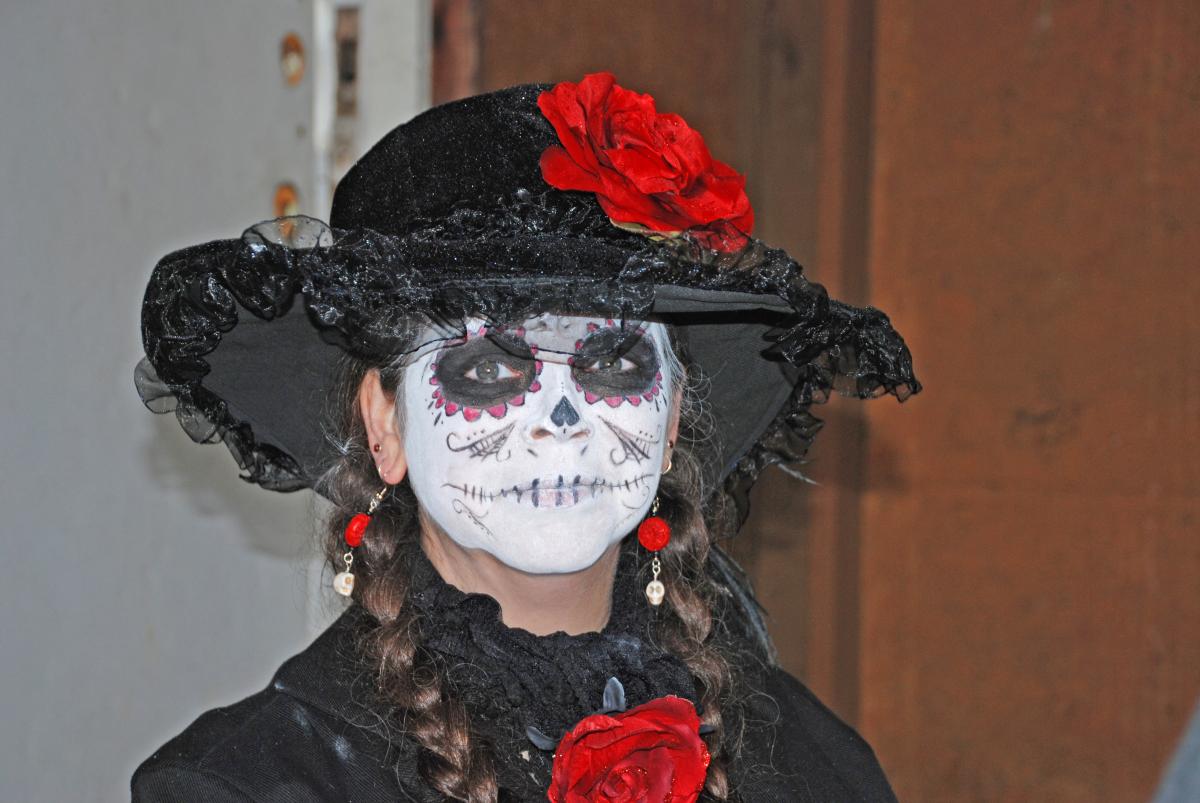 This woman illustrated how effective some adult disguises were.