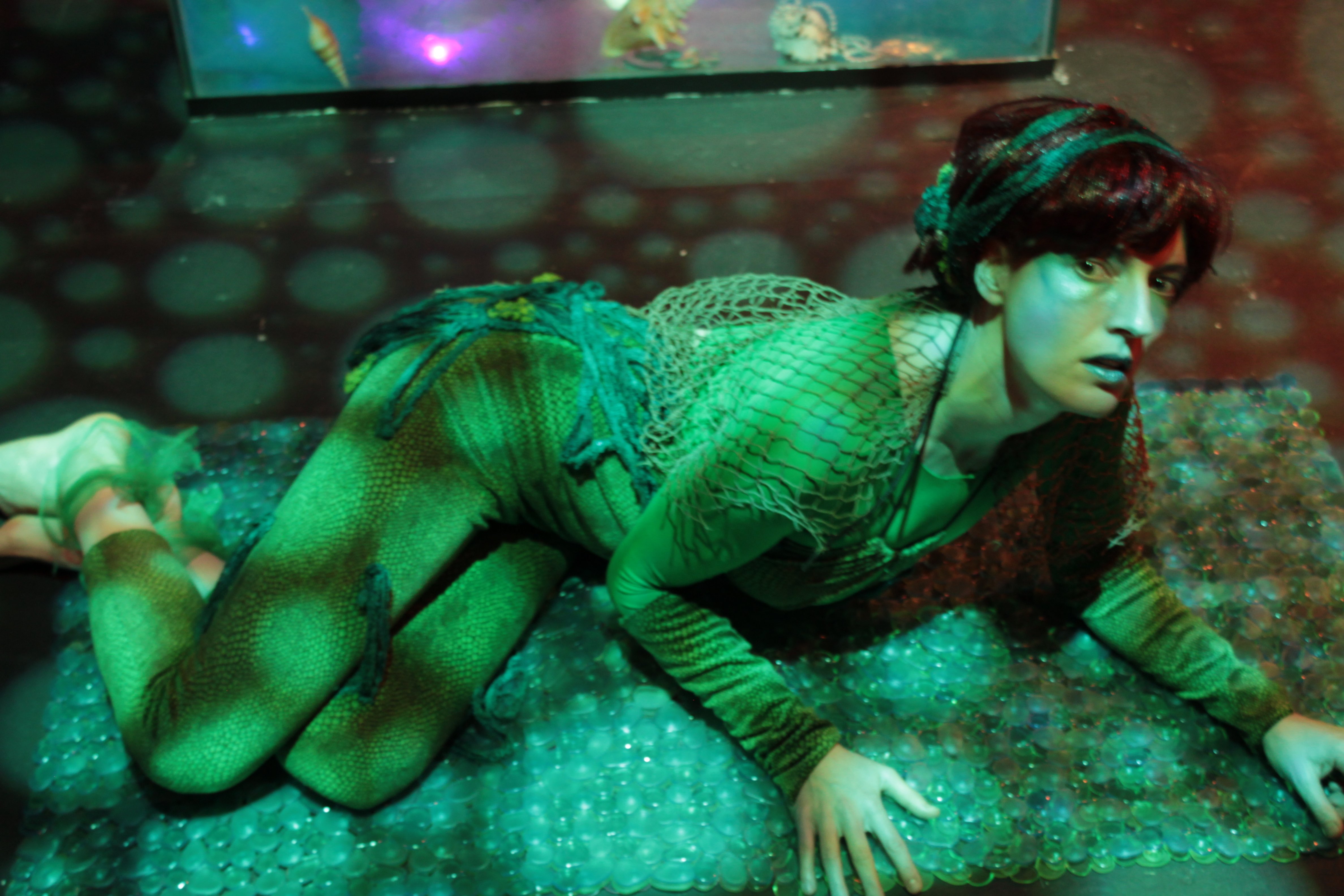 Sheila Regan as Janelle in Drowning

The Twin Cities is full of little theater companies run by people committed to their concept and the chance to produce their work. Despite general interest and my diligence following theater here, I am still amazed at the new companies I continue to discover. This week I found a sweetly experimental “dedicated to the performance-of-original-work” theater company Ghostbridge Theatre performing Jeff Nichols Drowning at the Cedar Riverside People’s Center Theater. The show was originally developed at Southern Illinois University in Carbondale and later performed at the Kennedy Center’s American College Theater Festival before coming here.

Nichols and Ghostbridge Theatre offer up about  a show a year, restaging and reworking pieces that he had in his back pocket. Based on the images from their website, each new reworking looks and feels different, as the actors and designers alter and develop the concepts in each production. Last year’s show, Four Actors in Search a Moment, was performed as part of Fallout Arts at the Bryant-Lake Bowl. The year before that, Echobell was performed at Blank Slate Theater as part of Theatre Terra Firma’s “Emerging New Works by a New Generation” event. The website describes their mission as: “Creating landscapes of imagination, our work utilizes ambiguity to empower audiences to make their own personal decisions–sparking debate and revealing the validity of multiple perspectives.”

Drowning follows these tenants with a plot involving Roger (Aaron Pepple), Sam (Nick Wolf) and Janelle (Sheila Regan) in a landscape that includes water (confining tanks), an apartment and a drowning (or near drowning). But ultimately, you have to decide what may or may not have really happened. The men seem to have both wanted to be with Janelle; who really ended up with her, if one “hijacked” the relationship of the other is never completely clear. What the viewer is left with is the sense that there are pivotal incidents in our lives and what really happens, what we choose to believe happened, what still might happen is somehow open to interpretation. As you navigate the confusion, you as a viewer are left to make sense of the situation.

In the end the appearance and behavior of Janelle is so overdrawn and unreal you wonder if she really existed (and if not, does it matter?). She seems, as Regan says of Janelle, to be misunderstood “as a real person … in the end I guess I see her as part memory, part fantasy. I think there was a woman that was Janelle, but clearly she also has elements of mythic imagination.”

In choosing what theater to experience in the Twin Cities, you have to decide if you are ready to be open to more abstract and surreal pieces. The performances of the young actors are solid in Drowning. A touch of verisimilitude is in the space and dialogue, but ultimately it is not linear or always logical. In the end the take away can be all the more visceral and if you allow it, potent because it deals in the deeper elements and not the depiction of something ostensibly trying to be real. Regan said of watching absurdist or surreal pieces such as Drowning:  “I look at it like a piece of abstract art—it’s not always easily understood, but you’ll have an experience either way. “