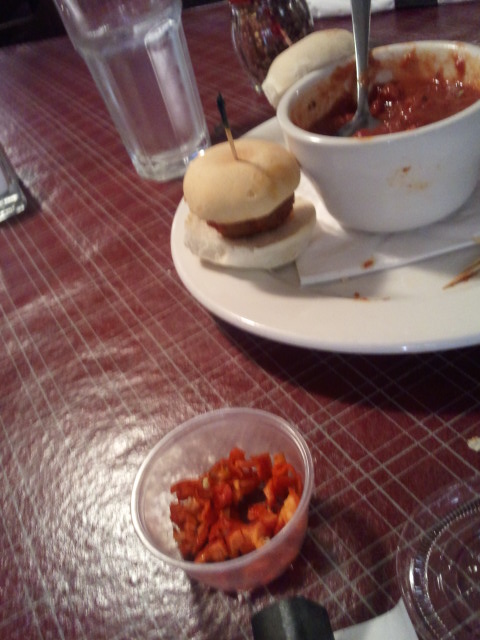 Two years ago, I was the first (crazy) person in the area to blog about the bhut jolokia, the hottest pepper on the planet. Since then, another pepper, the Trinidad Scorpion, has on occasion been measured as hotter than the more commonly known ghost pepper. While I have yet to try the latter, the former has made its way into our daily lives. Okay, not daily; the human digestive system is not made to handle regular ghost pepper consumption. But more and more places are including the spice as an option in their meals. 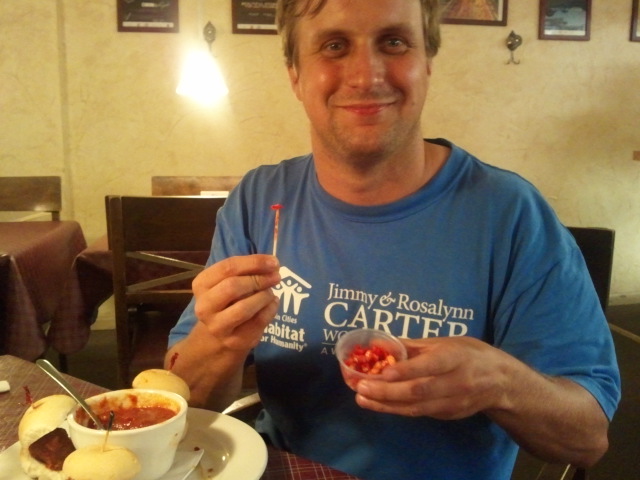 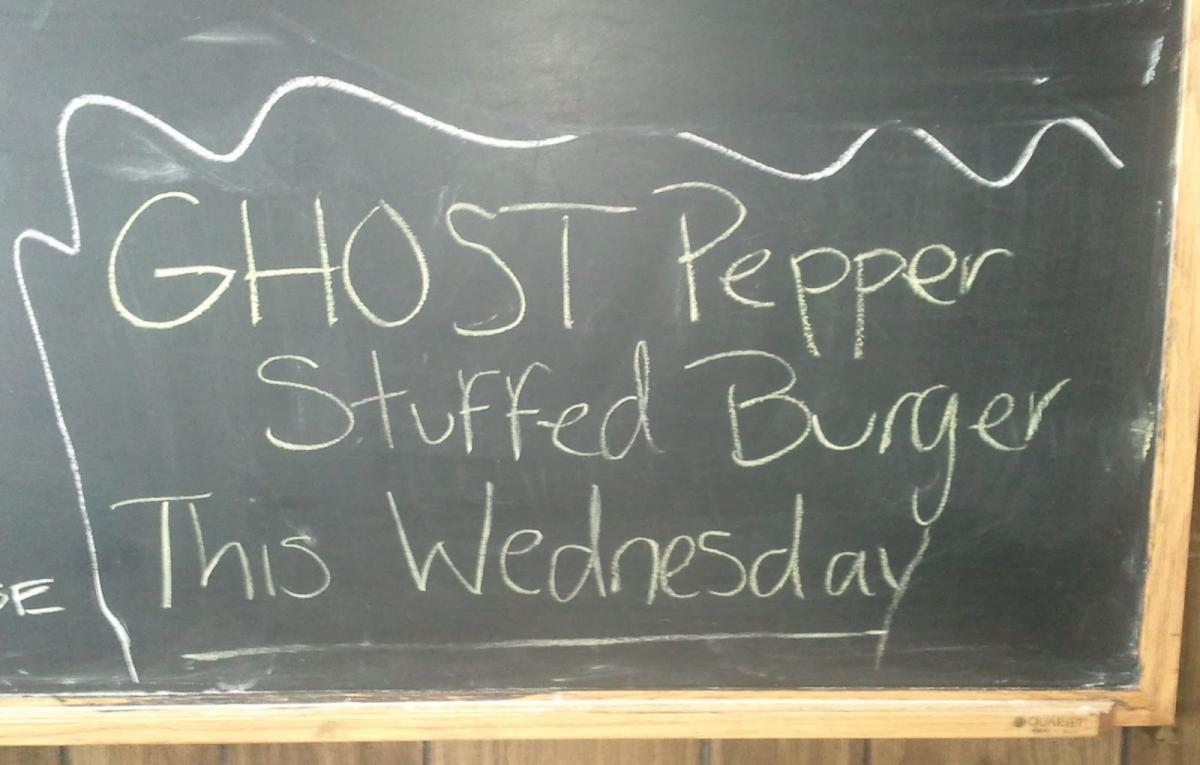 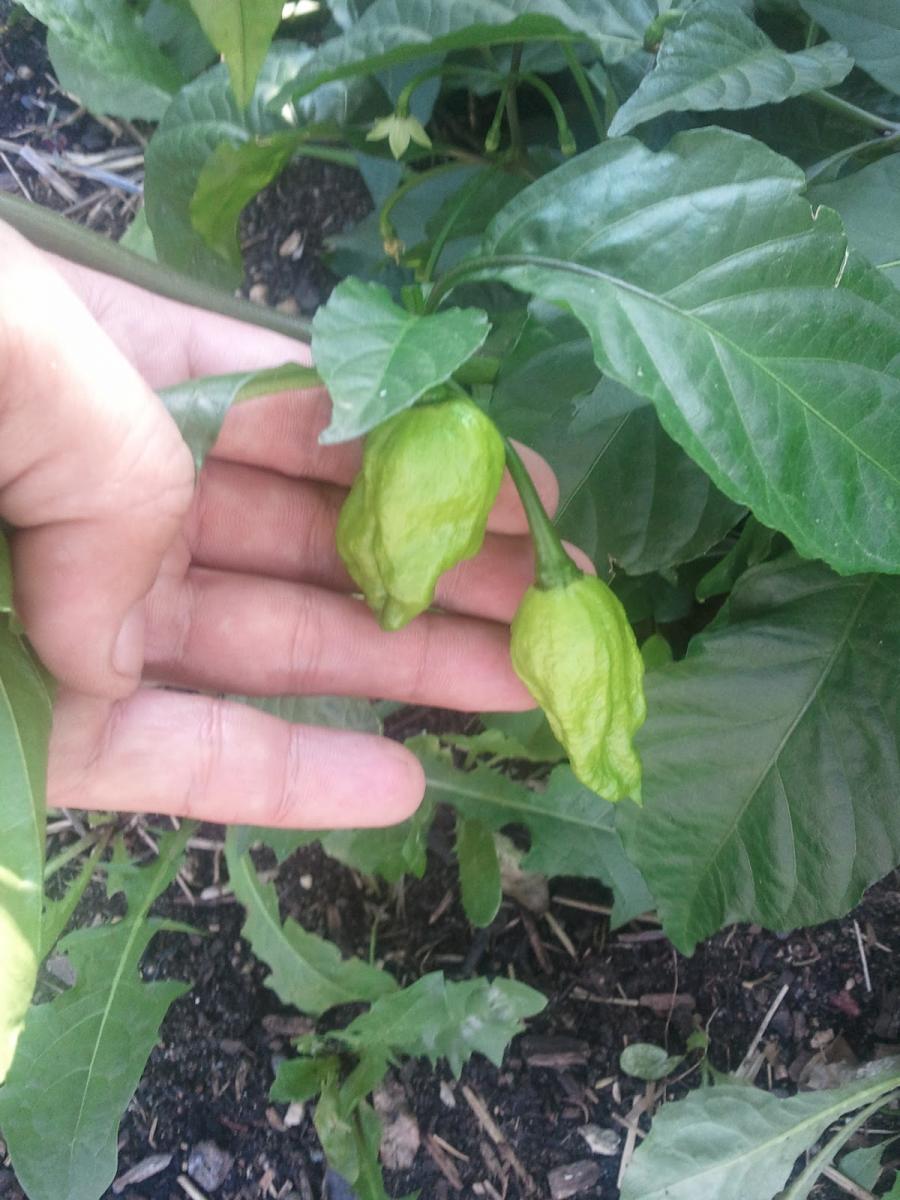 The top two photos are from Papa’s Pizza. After Dan Hylton’s CD release concert, I stopped by Papa’s for a quick bite. As the cook saw me pouring the red chili pepper flakes on my slider, he said, “If you like the hot stuff, I’ve got something REALLY hot for you. That is, if you can handle it.”

“You don’t mean…the ghost pepper?” I inquired. Sure enough, he brought out a small container for me to add to my food. when he saw me take down most of that container while only having a few sips of water, he gave me a bag of five or six peppers to take home. In a nice community touch, these were grown at The Warren, which hosted Dan Hylton’s concert that evening.

So I took home the peppers and made ghost pepper pork chops with a green bean side dish. All the vegetables used came from local community gardens or the West Broadway Farmers Market, by the way. 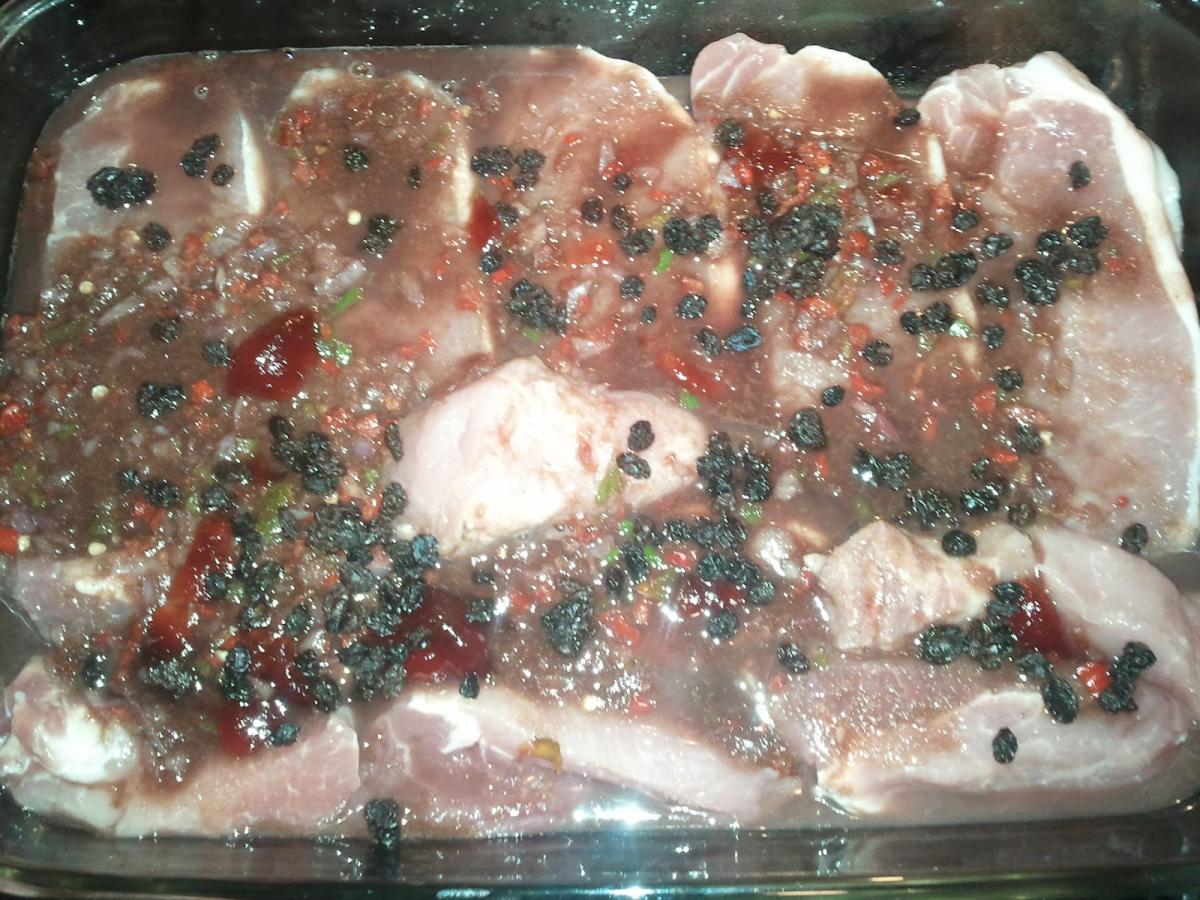 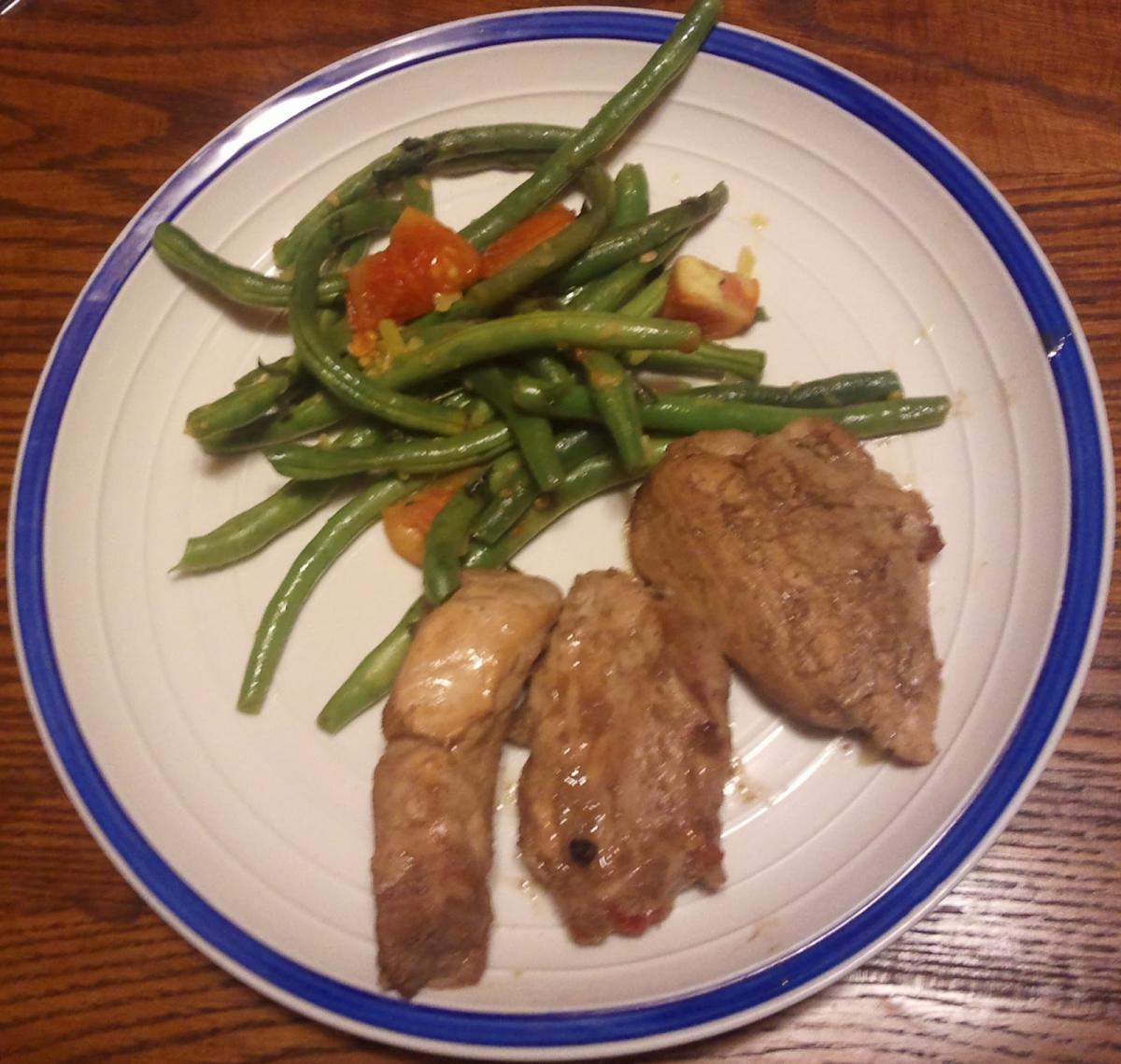 Given the relative lack of ghost pepper recipes on the internet, I’ll try to reverse-engineer what I did. But this was a dish prepared through the simplicity of using whatever I had at my disposal.

Remove the seeds and ribs from the peppers, mince the shallots, and add the peppers, seasonings, wine, and jelly. Boil over low/medium heat until the jelly has mixed evenly. Add the currants and pour over the pork chops. Marinade for several hours before either baking, grilling, or pan-frying.

After eating this dish for several days straight, it was time for a break from some of the hot stuff. But last week, Tootie’s on Lowry swapped out jalapenos and put in their homegrown ghost peppers. Apparently the ghost pepper burger has been popular enough that, according to their Facebook posts, Tootie’s is considering making this menu item a semi-regular part of their repertoire. 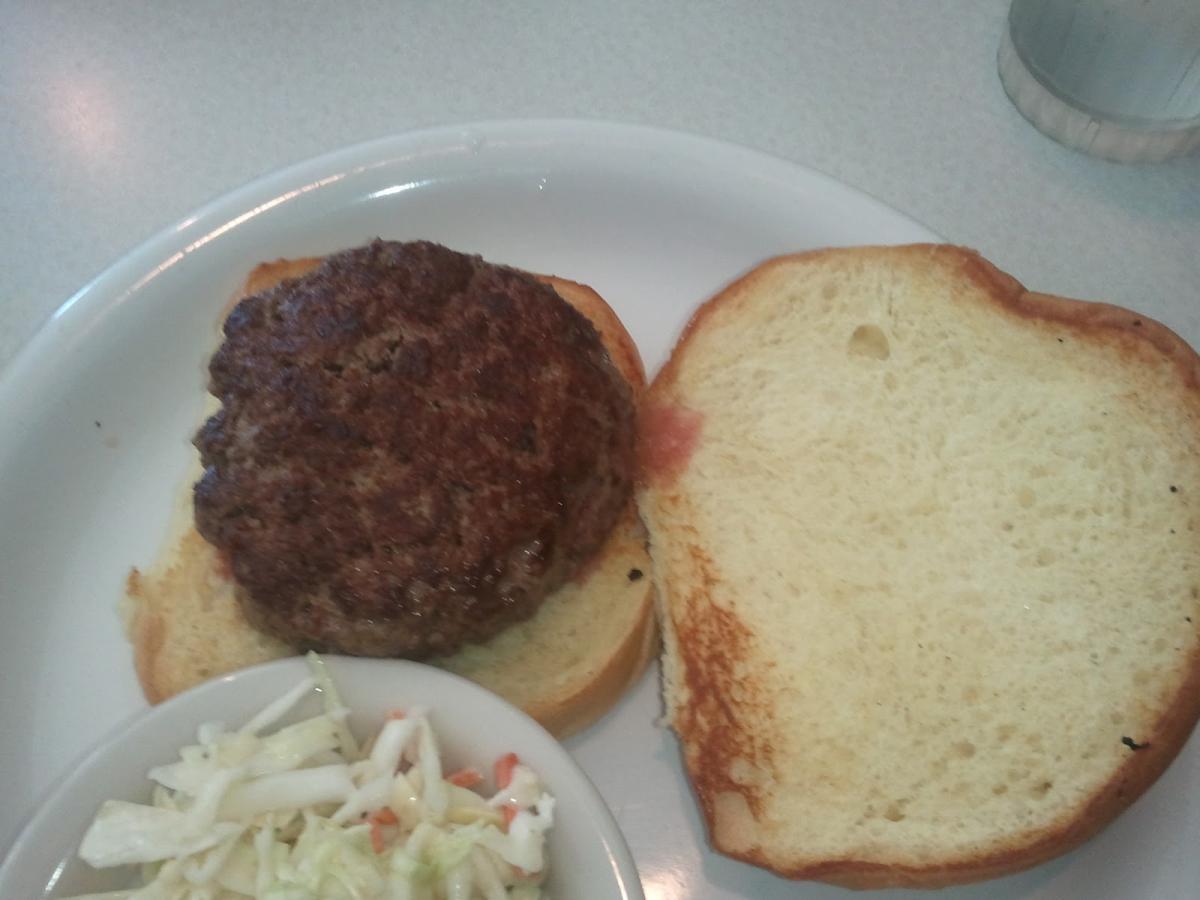 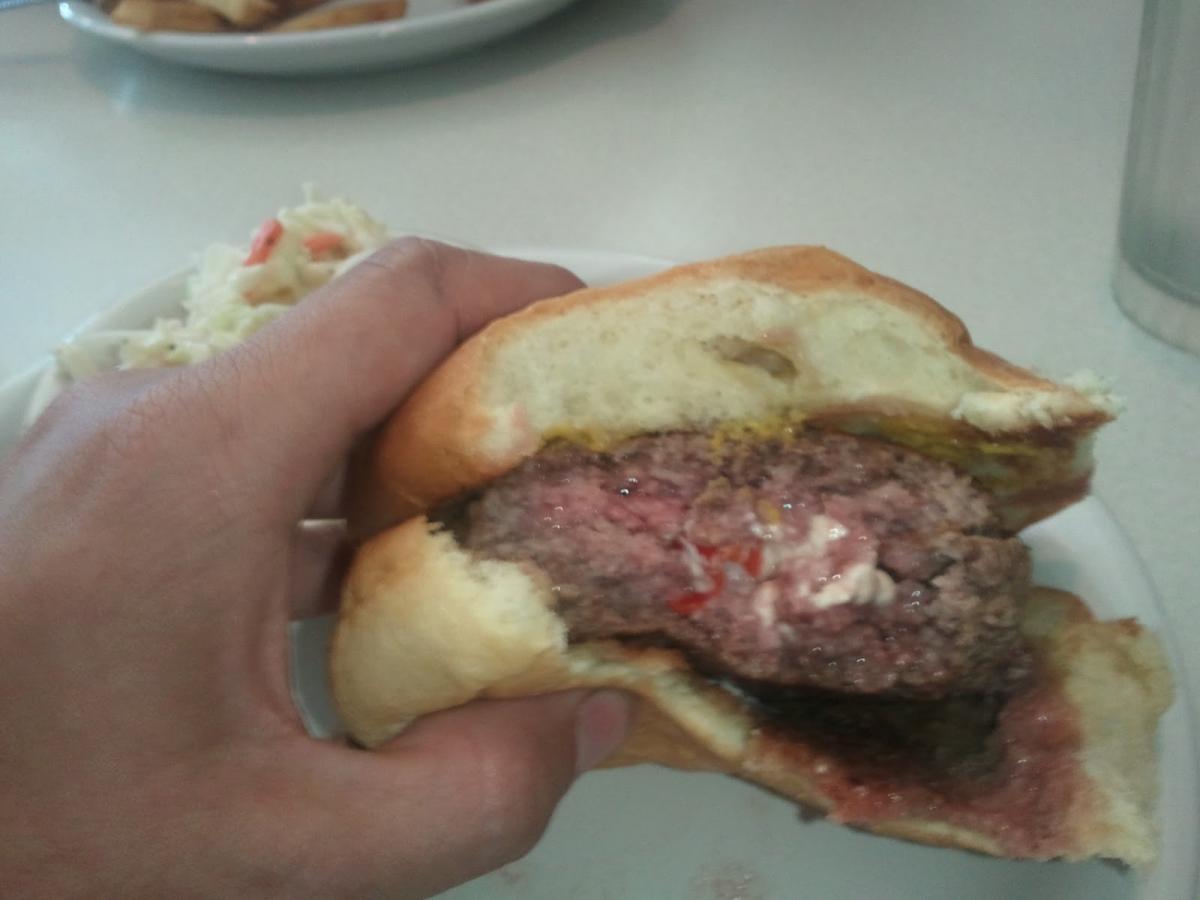 This particular burger was quite good–I needed a whole half-glass of water to wash down the ghost pepper. These peppers, though, come from our community and are not native to India or Bangladesh. Even ones grown in California are going to be hotter than what Minnesota can produce. Still, the ghost pepper burger is not for the faint of heart.

Nor is it for someone who expects an above-average or even average burger. WARNING: I am about to commit north Minneapolis sacrilege.

While I like Tootie’s as an institution, I have rarely been impressed with their food. Sort of how I don’t listen to Taylor Swift for her music. When City Pages named Tootie’s the best neighborhood bar of 2011, they said Tootie’s has “big, thick hamburgers topped in dozens of ways…” To which I respond: What toppings? Do you see any toppings here? Furthermore, the bread has the texture of something that came from the discount dumpster, went straight to the freezer, and was only recently thawed out.

I know part of the appeal of places like Tootie’s is the atmosphere and the hole-in-the-wall element. I don’t expect haute cuisine at Tootie’s on Lowry. But is it too much to ask that my hamburger come on semi-fresh bread, with a slice of tomato and some lettuce?

That being said, the meat, the cheese, and the ghost pepper were all excellent. (I do like the Reuben burger there as well.) And any place willing to serve this dish will get my repeat business.

Finally, in one of the pictures above, I have my own ghost peppers growing. I was given a plant as a housewarming present. Although July was a bit late in the season to get a decent crop, I put it in the ground in hopes that I’d get a little out of it this year. The first of the peppers are coming in, and I look forward to fully enjoying my first housewarming gift.

And then I’ll go back to Tootie’s for the hottest burger in town, probably grumbling the whole time.

(Photos by Jeff Skrenes, exceot second photo, which is contributed)